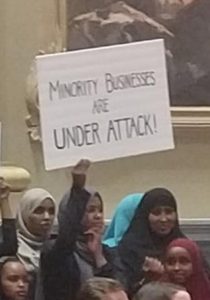 My name is Nasro Abshir. I am the founder and owner of Family First Choice Childcare. My mom and I used to have two childcare locations—one in the Phillips neighborhood and the other in Loring Park. While commercial displacement has been talked about as a “concern” for the 2040 Plan, it has already been my reality. My Loring Park location was forced to close—leaving my families with no child care, my employees without a job, and in some cases resulting in job losses for my parents—because of the short notice from my landlord. I have been out of business on this location for about six months, and it has made it very difficult to get a new second location up and running due to all the city and state regulations required for child care. I am in the women-owned business community, I am an immigrant, I am a Person Of Color and none of this matters when a developer wants the space you launched your American Dream in with your heart and soul.

There were about six POC/women-owned businesses on our block (14th and Nicollet) as well as an arts theater. We believe the city had legal standing to reject this development based on the current zoning. The block is zoned for two stories while they wanted to build six.

Even though this was a private transaction, the city had leverage because rezoning and variances were required. The city was complicit in our displacement.

The forced displacement of small businesses in Minneapolis with its rising land values is of increasing concern to my local community. Commercial gentrification is already happening. There are no policies requiring affordable workspace along with mixed-use developments. The language currently being used to address the concerns of small business owners, especially POC, immigrant and women-owned, is not strong enough.

I found out about the redevelopment from a news article. That same night, a few of my employees and I walked across the street to the annual CLPC (Citizens for a Loring Park Community) neighborhood meeting. I would get their emails and invitations to events and meetings and I would never attend them. I thought to myself, “I am too busy for that.” When I attended that annual meeting in March 2018 I was livid and read that the developers Reuter Walton would be presenting their plans. I was relieved that the neighborhood was just as upset if not more. That same night they had an election for the CLPC board, which I had no idea about. I ran, and I was elected. My first election victory, ever. As a newly elected board member, I was learning on the job. I didn’t know what neighborhood organizations were or how the city worked and operated. Through the support of my fellow board members and neighbors, we pushed back on the redevelopment and even protested the public hearing where we were 17th on the list. Children, teachers, neighbors and friends were all waiting for hours to be heard. It was amazing that finally these city officials on the planning commission couldn’t just dismiss us. They couldn’t look at these kids in the eyes and approve this development, so they delayed. Despite their claims of racial equity and affordable housing, they approved a plan that had zero affordable housing and displaced the very people the city claims to be fighting for. It’s not adding up.

PHOTO CAPTION: Nasro Abshir, holding the sign “Minority Businesses Are Under Attack” at the public hearing at City Hall.