A trade war is when a country raises tariffs (taxes) on a product coming into the country. The business selling that cheaper foreign product then has to pass that tariff (tax) on to the consumer, and this can make the product cost the same as an American-made product. 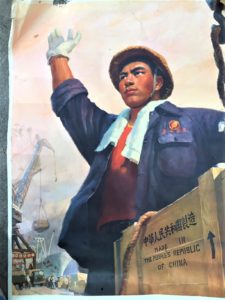 Big retailers like Walmart and Target have been lured to China to produce their goods. They’ve invested billions in creating a manufacturing infrastructure. The Chinese provided special economic zones where U.S. capitalists could build factories, hire workers at low wages, and the workers even agreed to a no-strike pledge.
The only hitch in all this was that the Chinese government owned 52% of the factory.
Lenin said: “The Capitalists will sell us the rope with which we will hang them.”
China has gone a step further. They convinced U.S. capitalists to give them the factories with which they will compete with the U.S. for markets in Asia, Europe, Africa and South America. The U.S. gave them the factories and showed them how to run them.
The most far-reaching and profound development in international trade hasn’t been Trump’s Trade War, it’s been the opening of China’s New Silk Road, or Belt and Road Initiative. In 2013 Xi Jinping announced a bold plan to link China to the rest of the world through new highways, harbors and airports. They’re sponsoring a $68 billion China-Pakistan Economic Corridor linking China to Pakistan’s Gwadar Port on the Arabian Sea. They’ve already spent more than $200 billion on infrastructure projects in 150 countries, and the final bill will probably be in excess of $1.5 trillion.
So, what happens to those Chinese-owned factories in a trade war? If they manufacture drill bits, and the U.S. tariffs on Chinese-made drill bits go up by 25%, then it’s easy for American consumers to switch over to U.S.-made drill bits. And it feels patriotic. And Trump can claim victory by saying he’s saving American jobs. And the Chinese factory will have to find other customers for its drill bits. The New Silk Road/Belt and Road Initiative connects that product with new customers.
Customers who had been purchasing a product with a U.S. brand (for products that were probably manufactured in China) will welcome the same product with a Chinese brand at a lower cost. And the tariffs will cause the U.S. corporation to stop production at its Chinese factory, but the Chinese factory will keep on producing and exporting and supplying the customers that once bought the U.S. products. The result will be that U.S. corporations will lose their international trade and go bankrupt, which could cause a complete collapse of the stock market.
And all because Trump believed trade wars were easy to win, he was playing a short game, and China was (as always) playing a long game. The objective of Eastern martial arts is to allow your opponent to make a mistake by attacking you. Let him lunge at you. Step back. Defend yourself. Be calm and wait it out. A protracted trade war with China will not hurt China. China already owns the factories and knows how to run them. That’s why Xi rejected the latest negotiations and broke off the talks. Trump immediately increased tariffs on another $200 million of Chinese imports, further raising prices to U.S. consumers and further damaging the manufacturing arm of U.S. corporations. The longer this goes on, the more the U.S. will suffer, and the more China will take over U.S. customers in Asia, Europe, Africa and South America.
And Trump still believes he can bully China into submission. He’s saying, “If you don’t give up, I’ll punch myself in the other eye.”