‘The beatings will continue until morale improves!’

This map, produced by a team of geographers, historians and social activists at the University of Minnesota (https://www.mappingprejudice.org/), shows the areas of South Minneapolis that had restrictive covenants written into the deeds of homes for sale: “That the said land or buildings thereon shall never be sold to or the same be occupied by persons of Negro blood,” March 20, 1945.
On July 16, 1931, the Minneapolis Tribune noted: “Angry white mob surrounds Minneapolis home”; “thousands assembled nightly at 46th and Columbus in protest, many hurling taunts and rocks at the home”; “in June 1931, Arthur and Edith Lee bought a two-bedroom bungalow at 4600 Columbus Av. in south Minneapolis. The Lees were black; the neighborhood white. Despite threats from the neighborhood association, they moved into the home in July, along with their 6-year-old daughter.”
“‘Nobody asked me to move out when I was in France fighting in mud and water for this country,’ Arthur Lee, a World War I veteran, told the Tribune. ‘I came out here to make this house my home. I have a right to establish a home.’” 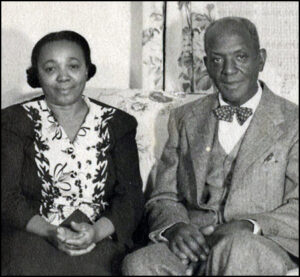 Edith and Arthur Lee (photo courtesy of the Lee family)

The traditional and accepted area for people of color to live was between Chicago Avenue and Nicollet from downtown south to 42nd Street. There was a crepe paper barrier that informally restricted housing east of Chicago and west of Nicollet. The Lees were the first to move the boundaries south of 42nd Street.
Racism was alive and active even within the black community in South Minneapolis in the first half of the twentieth century. Nelson Perry, in his book, “Black Fire, the Making of an American Revolutionary,” talks about growing up in South Minneapolis and turf battles in the early ’50s between white and black gangs over in Phelps Park. He also talks about Brown Paper Bag parties in the black community where young blacks would post a brown paper bag at the entrance to a house party—signifying if you were darker than the color of the bag you were not welcome.
The Minneapolis City Council has proposed radical changes in the city’s zoning and development plans. In South Minneapolis this would mean three- and four-story apartment buildings could be built everywhere from downtown to 42nd Street. The plan is being sold as a means of compensating for previous patterns of racial discrimination in housing.
MPR reported: “The plan will try to mitigate the effects of climate change and racial discrimination in part by increasing density in the city, particularly along transit corridors. Among other things, the document allows triplexes in every neighborhood, a provision that many residents criticized.”
Will Stancil, an attorney and research fellow at the University of Minnesota, said in an article in the Star Tribune: “The comprehensive plan is not a panacea for housing inequality. But addressing part of the problem is better than addressing none of it at all. No matter how forward-thinking Minneapolis is today, it counts for little if the city’s land-use laws indefinitely perpetuate decades-old patterns of discrimination. By adopting the comprehensive plan, Minneapolis shows that it’s willing to take action against its own pernicious legacy of segregation.”
Council President Lisa Bender said, “I think most of my constituents agree with the overall values of the draft plan’s focus on race equity, environmental sustainability, safer streets and housing affordability.”
What the plan does, of course, is just the opposite. It will wipe out the communities of color that live in South Minneapolis that have not had restrictive covenants, and it will leave intact those neighborhoods and communities that discriminated against people of color. People in the inner city who have been able to rent a house with a yard will be displaced. Their landlord will be offered a handsome price for their home; it will be knocked down and replaced by a three- or four-story apartment building. The inventory of affordable homes will shrink, and the only option available will be to rent an apartment in a building with young urban professionals who want to live closer to downtown.
The communities of color that suffered most under housing discrimination in the first half of the 20th century will be the ones displaced and asked to suffer yet again.
The beatings will continue until morale improves.