“A People’s History of the Seward Neighborhood,” edited by Marilyn Matheny, Wendy Epstein and Rick Musser, has received two big awards. The book was selected as a 2019 Award of Excellence winner by the Leadership in History awards committee of the American Association for State and Local History (AASLH). The AASLH Leadership in History Awards is the nation’s most prestigious competition for recognition of achievement in state and local history.
In addition, the book was nominated as one of the three best books in the 2019 Regional History category by the Midwest Independent Publishers. Although not the top winner, a silver medal will be placed on all copies sold from now on.
Special thanks to the numerous folks who contributed to the project. “A People’s History of the Seward Neighborhood” will be on sale at the King’s Fair in early September. 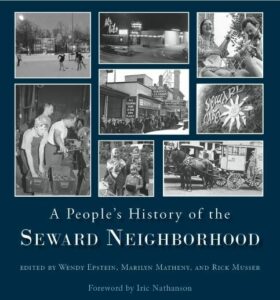