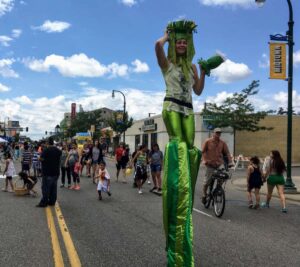 A previous year’s performer from Heart of the Beast Theater

The first indication we had that Open Streets may be hitting a stride of competency after over a decade of building up to it was that it was a lot easier this year to get advance information. The map with all the major presenter booths and activities is promised for two weeks before the event, whereas in previous years it came out just a few days before. So, vendor and sponsor participants probably have more of a handle on how, and how important it is, to get the planning out of the way before the last minute rush. This is the third or fourth year that Lake + Minnehaha has been an Open Streets route without much change, so it looks like they’re here to stay. (Lake Street has been in the mix almost since the beginning, but it used to go east all the way to the river, and now takes a southward turn at Minnehaha and goes to the Falls.)
We can tell you for 2019 that the day is July 21, and the time is as ever, 11 a.m. to 5 p.m. The route is the same as the last couple of years; it starts on the northwest end at Lake and Elliot, just outside Midtown Global Market, which is a major sponsoring participant. The complete list of sponsors and various other information, as well as a free bus pass for the day, can be found at https://www.openstreetsmpls.org/lake_minnehaha. Sponsors include two neighborhood associations—Midtown Phillips and Longfellow, as well as KFAI, Music in Minnesota.com, USInternet, Midtown Global Market, YWCA, Metro Transit, and, a bit of a wild card, Outsiders Pizza, a frozen artisan pizza sold at Target. Traffic will be closed on the affected streets, so if you need to drive to attend, plan to park several blocks away without crossing either Lake or Minnehaha. Better yet, take the (free) bus. Bring money and come hungry; there will be lots of food trucks, as well as Geek Love Cafe pizza and other food and drink vendors. 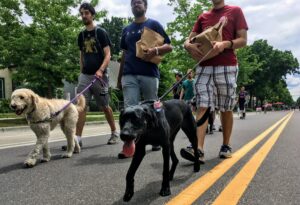 Part of the fun of Open Streets is in the surprises. Small businesses and nonprofits often don’t announce their participation at all but then come up with interesting things along the route. So even if you concentrate your time on one or more of the major “hubs” we are about to tell you about, you should also linger along the way and let the day unfold. The three major hubs of activity are:
• Lake Street, 13th to 15th Ave. – Midtown Phillips Neighborhood Association in partnership with In the Heart of the Beast.
• 3000 block of Minnehaha (site of Midtown Farmers Market) – Longfellow Craft Beverage Festival.
• Minnehaha and East 45th St. – Minnehaha Recording & Solsta Records Music Festival. 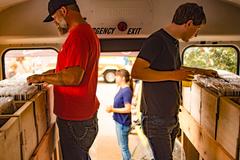 Inside the Solsta vinyl bus

There will be a performance stage featuring (in order of appearance) The Brass Messengers, Wain McFarlane, Little Thunderbirds, Inti Samay, Sarah Greer & Friends, and AJ & Rina. In addition to the numerous restaurant options in the vicinity, there will be a Mexican food truck, Sherzad Korizan, from Midtown Phillips neighborhood.
The Longfellow Craft Beverage Festival is a first for this location—the site next to Moon Palace Books that also hosts the farmers market—although it builds on the idea of last year’s “Beverage Garden.” Beverage participants are the same as last year: Du Nord Craft Spirits and Lawless Distillery for spirits, Urban Forage Winery & Cider House for, obviously, wine and cider, and Arbeiter Brewing and Venn Brewing for the beer. (Venn Brewing isn’t technically in Longfellow, while Arbeiter Brewing is, but isn’t open quite yet, scheduled to open fall 2019. Consequently, Venn will be pouring a special collaboration beer that both breweries made, along with other Venn Brewing beers.) Food provision will be in the capable hands of Geek Love Cafe, either inside Moon Palace Books at their cafe or from a streetside booth. There will be a bouncy castle and picnic tables and shade for resting. Nearby, but not part of the Craft Beverage Festival, there will be a performance stage hosting several acts by Spirit Garage (a non-denominational church that meets in the Hook and Ladder). Next door, the Hook and Ladder performance venue will be providing more beer, from Bent Paddle, and an indoor-outdoor space with tastings, a multi-vendor Southside Vintage Flea Market, and performances in their new Mission Room space. So, a plethora of sipping, relaxing and listening options available at that corner. 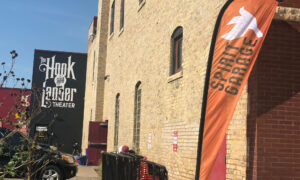 Spirit Garage at Hook and Ladder

Finally, a full-fledged mini-music festival is going on at the East 45th Street crossing of Minnehaha. Presented by a collaboration of Minnehaha Recording Company and Solsta Records, this hub features the Solsta Records “vinyl bus” selling records, tours of the Minnehaha Recording studios, food trucks, including the only confirmed one at this time, Don Oishi, and two live performance stages. The lineup consists of (in no particular order) Matt Yetter, Grant Glad and The Soo Line Loons, New Rocket Union, Tackie Annie, Falcon Arrow, Illism, Sieed Brown, NurD and Dosh.
This will all be in addition to the many small businesses that line both Lake and Minnehaha along the route, offering dining options from tacos, to hot dogs and ice cream, to craft grilled cheese, to full-course lunch. In the stretch west of Midtown Phillips’ hub, there are a lot of activities, including those centered around the Midtown Global Market, which are always outstanding. In the stretch between HOBT and the Minnehaha corner, there is the YWCA, plus more scattered information booths and food vendors. There are coffee shops galore, and of course, loads of vintage stuff for sale along Minnehaha’s famed mile of antique and vintage “stuff” shops. There are always health and fitness related activities and information booths, in keeping both with the neighborhoods’ focus and the mission of Open Streets Mpls. Open Streets has finally crossed two bars, from starting out as an activists’ obscure event, to becoming a quirky new summer activity, and now to a mainstream, must-attend, multi-node festival. Bring your dog, your bike, your kids, or your grandkids, or just your friends and an inquiring mind, and enjoy those open streets. 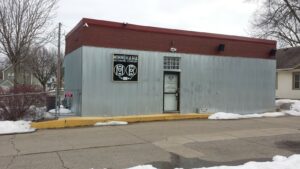