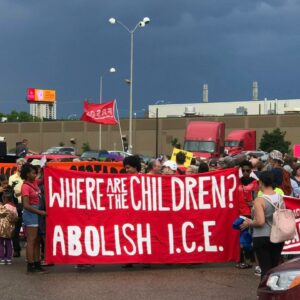 An hour before the march was to begin the skies opened up in a torrent of rain, as though weeping for the sins of our nation. But as carloads of marchers began to arrive, the rain stopped and a cool breeze cleared away the oppressive heat of the previous day. And the marchers assembled. One hundred, two hundred, three, they kept coming until we were more than a thousand strong. We filled the street for two blocks chanting: ABOLISH I.C.E. SHUT DOWN THE DETENTION CENTERS. Stop separating families! End the Muslim Ban. DON’T CAGE KIDS. And we took over the streets as we shouted our message for a mile and a half march. Did you hear us? Do you hear us? Will you join us? -Dan Leisen