Richfield: a nearby destination for affordable summer fun 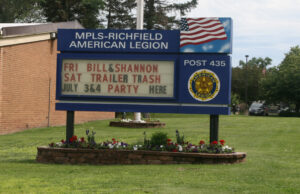 Looking for some fun this summer? Richfield might have just what you’re looking for, with parks, pools, music, food and even a wilderness adventure. Richfield’s parks have a lot to offer.
Head south on Portland Avenue. Just past the Crosstown, turn left at 64th Street into the vast green space which is Veterans Memorial Park. There you’ll find Wheel Fun Rentals, a playground with equipment for climbing and a snack shack with a 10-hole mini golf course. Rent a golf club for a $9-game ($2 cheaper for those younger than 11, older than 62 and members of the military), and after that, grab one of the take-out restaurant’s excellent malts, cones or pizzas.
The mini golf course has just been renovated, adding some realistic features and making it accessible for disabled mini golf players. The course is shaded, with fountains and “ancient rock formations” installed between the greens.
“It’s a great location for dates, for kids and for families,” said Rachel Rademacher, the location manager. “And the ice cream is really good. We have a new combo special with a pizza, two drinks and two cones for $19. 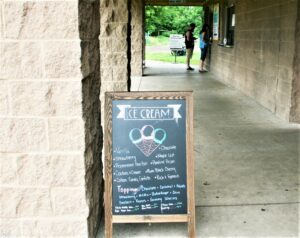 Ice cream, pizza and malts is one of the features at at the Wheel Fun mini golf course.

“And you can rent bikes and ride them all around the park. Some bikes can fit up to six people.”
Sit on the patio with your meal, or if it’s raining, take a seat at a picnic table under the picnic shelter, except Saturday mornings throughout the summer, from 7 a.m. until noon, when up to 20 vendors, many who travel to the metro from faraway farms, sell their wares at the Richfield Farmers Market.
Eichten’s Hidden Acres, a three-generation farm, brings in their natural cheeses from Center City, including the popular Gouda in flavors such as dill, hot chipotle and tomato basil. And, at the Minnesota Food Forest, from Taylors Falls, you can find honey, mushrooms, ramps, fiddlehead ferns and homemade fruit leathers.
Or, pick up some pickled vegetables or maple syrup from Lynnette Labeau’s table. And look for Early Boots Farm table, selling cuts of sustainably-raised beef, from their 200-acre farm near Sauk Center.
If you want an easy but delicious meal, you can choose from six types of authentic savory homemade pirogue, a traditional Eastern European dumpling, at Natasha’s Pirogue stand. They’re frozen and ready to take home. Just thaw, heat and serve.
And, of course, if you’re already hungry, stop by Southern Soul Wings and Ribs where Rebi Humes, her husband, Malcolm, and sister Jackie Berrie serve up amazing Memphis-style smoked pork ribs or wings, served with a spicy sweet sauce. They also serve a Memphis-style mac ‘n’ cheese, (in the South, mac ‘n’ cheese is a vegetable), grilled brats, green beans and other Southern staples. 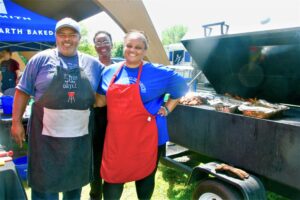 “I hope to bring Memphis hospitality to Minneapolis,” said Rebi. Humes moved to the Twin Cities from Memphis 25 years ago and started cooking Memphis-style for friends and family, who encouraged her to go pro. Ribs are $8 for three. Wings are $6 for four.
This is their first year barbecuing for the public. While they hope to expand in the future, for now, they are a Richfield Farmers Market exclusive. “Show up early,” said Humes, “or we might run out.”
The market also features artisans, early in the season before the produce and other foods take over, including jewelry, household goods and essential oils. And, if you have a gardening question, there are experts there to answer them at the Master Gardener table.
From the Farmers Market, it’s a short walk to the Richfield swimming pool, where 500 to 700 people come to cool off on hot summer days. The large 50-meter pool was built in 1961 and includes a popular and twisty double water slide, added in 1991, as well as water volleyball, two lap lanes, a diving board and a kiddie pool with climbing equipment and fountains. The main pool is wheelchair accessible. Season passes are available for individuals and for families. 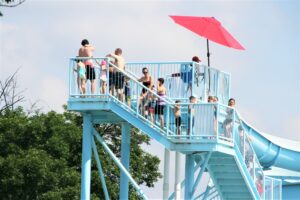 The 2-plus story water slide is popular with swimmers

Next door to the swimming pool is Richfield’s ice arena, home to the Minnesota Magicians, a junior ice hockey team in the North American Hockey League’s Midwest Division. The league auditions players aged 16 to 20 years, who can use the team as an opportunity to improve their skills and perhaps, get seen by a recruiter and get a college scholarship. Last year, 20 hockey players moved on to colleges. This year’s team has been chosen and hockey season starts in September. The games are open to the public.
For other ice lovers, the two rinks offer skating lessons for all ages, open skating and open hockey. And, of course, the Ice Arena is the home to the Richfield Curling Club with leagues, camps and classes. All equipment is provided, but wear a clean pair of tennis shoes.
One door down is the park’s brand new community band shell, where concerts are held every week through July. For adults, there are a variety of music choices, from classical to blues, reggae, mariachi, bluegrass and rock on Thursday evenings. For kids, there are interactive concerts, magicians, live animals from the Minnesota Zoomobile and more. Kids’ events are Tuesdays starting at 11 a.m. Check online for performance schedules.
A visit to Veterans Memorial Park should include a stop at the Honoring All Veterans Memorial. Spend a moment to remember all those who gave their lives in America’s wars. From there, it’s only a few steps to the Fred Babcock VFW Post 5555. The VFW’s mission is to foster camaraderie among those who served in wars, but the public is invited to enjoy their restaurant’s new, extensive menu. Try breakfast, lunch or dinner or enjoy cocktails from their full bar.
There’s live music and dancing and even gambling, including Texas Hold ‘em games on Friday evenings and Bingo on Tuesdays and Sundays. It’s fun and affordable. Oh, yes—they still hold their traditional meat raffle on Wednesdays.
A mile or so from Veterans Memorial Park is the Wood Lake Nature Center. This could be a secret place except that for years, every school child in Richfield, from preschool through 5th grade, visits three times a year as part of their science and nature classes. The Center is in the middle of Richfield, a half-block from gas stations, Pizza Luce and the Market Plaza shopping mall. 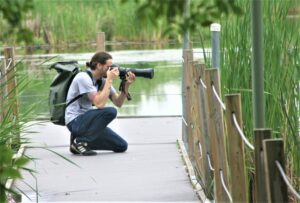 The Wood Lake Nature Center is popular with wildlife photographers.

But, walk up to the main gate and the city sounds begin to fade, replaced by the sounds of more than 220 species of birds that make their home there over the course of a year. Foxes, raccoons and turtles—some vulnerable—are there, too. The Nature Center includes a freshwater cattail marsh, a mixed lowland forest and a restored prairie providing space for a number of species of animals and plants.
A half century ago, the 150-acre natural park was a recreational lake with lakeshore homes surrounding it, said naturalist Scott Ramsay. That changed in 1960 with the development of Ike’s interstate highway system. The creation of highways I-35W and I-494 lowered the water table 10 feet. “It became a cattail marsh. Then in 1966, the Richfield Beautification Committee offered three options,” he said. “They said, turn it back into a lake, build a golf course or build an ice rink.”
But a letter from Les Blacklock, a renowned local nature photographer, asking that it become a nature center, changed their minds, and today, the Wood Lake Center is home to summer camps, a nature center and museum, as well as three miles of walking trails. 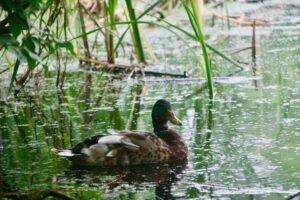 Flocks of ducks make their homes in the Wood Lake Nature Center.

The place is popular with birdwatchers, hikers, photographers and people just needing a little bit of nature in their week. Be sure to bring your binoculars. Visitors can enjoy the wildlife-viewing area, educational programs, an amphitheater and a picnic area. In the winter, ski trails open up as well. And, many trails are accessible by wheelchairs in the warmer months.
There are programs throughout the year, including the annual Urban Woodland Half Marathon and 5K. There are summer camps for young people and adult programs including a book club and bird hikes. Check their schedule for a chance to learn to collect sugar maple sap for syrup, lessons on collecting and cooking wild plants, the muskrat safari, advanced marsh exploring, even instruction on natural resource management. All classes are led by staff naturalists.
More than 70,000 people visit the Center each year. If you go, don’t keep it a secret. It is a magical place. And if you go, if you are lucky, you might see ducklings. 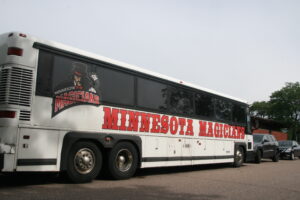 Yes, Richfield really does have a hockey team.