My day in court, conclusion 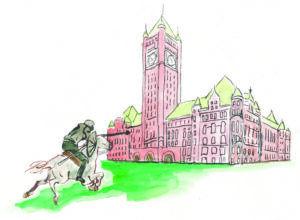 The judge said he’d take the measure under advisement.
He wrote me a letter a little more than a week later saying he was denying my petition: “Petitioner cites no specific legal duty—be it statute, ordinance, rule, or regulation—that requires the Park Board to remove rocks from Minnehaha Creek or pump a certain amount of groundwater out of Hiawatha Golf Course. At best, Petitioner represents that the Park Board has an overarching duty to protect the public welfare. Such an overarching aspirational goal—akin to ‘do the right thing’ or Google’s corporate conduct moto [sic] ‘don’t be evil’—is not the same thing as a specific and clearly imposed legal duty for which the Court could, through a writ of mandamus, direct the Park Board as to how to carry out its duties.”
So, it ends.
If you go down to the 30th Avenue footbridge crossing Minnehaha Creek, you won’t see boulders blocking the flow of water. It looks like they’ve been removed.
So, the Park Board got what they wanted—nobody can tell them what to do. And I got what I wanted—the boulders got removed.
But there really should have been an easier way to do all this.