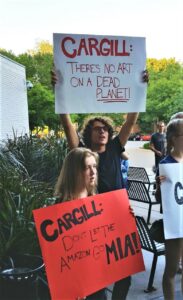 On Thursday evening, Sept. 5, I joined a group of about 70 concerned people in a global “Amazon Day of Action” at the Minneapolis Institute of Art (MIA). According to Mighty Earth, one of the numerous environmental groups that organized and supported the event, the purpose of the protest was “to hold governments and companies that stand to profit from the fires in the Amazon accountable for their role in this environmental destruction.” On Sept. 5 at the MIA we were specifically making a statement about Cargill, a privately-held global corporation based in Minnetonka, which has a gallery named after it in the museum.
The Cargill Gallery is on the first floor across from the gift shop and right now is featuring a wide range of artistic expression reflecting on various histories. It’s a beautiful, soulful show that couldn’t have been produced without money. Thankfully, the Cargill corporation is a funder of the MIA. At the same time, Cargill has also been seriously instrumental in the deforestation of the Amazon rainforests.
The protest at the MIA focused on the fires in the Amazon, the largest number in the last decade, and Cargill’s role in them. Thousands of acres are being cut down and burned to grow soy and raise cattle for beef and leather. The “lungs of the Earth,” as the Amazon is called, are dying of pneumonia.
We stood outside the MIA at the entrance holding signs such as, “Cargill: There’s no art on a dead planet” and “Cargill: helping the world burn,” a reference to Cargill’s slogan, “Helping the world thrive.” Then some of the group went inside intending to go to the Cargill Gallery, but security wouldn’t allow it. So they lay down on the floor. A video was made of one of the guards saying, “This is a museum. It’s not for social activism.” The museum’s director wasn’t on the premises.
Was the protest successful? Did it call Cargill to account? Time, not in abundance anymore, will tell. Because of its enormous size, Cargill could tip the scale in terms of the planet’s health.
In 2014, according to the Forest Heroes website, “at the United Nations Climate Summit, Cargill CEO David MacLennan stood beside Secretary General Ban Ki-moon to announce that Cargill would extend the principles of its recent ‘No Deforestation, No Peat, No Exploitation’ palm oil policy to other commodities around the world, such as soy, sugar, beef, and cocoa.
“‘Recently, we announced a new policy, committing to zero deforestation in the palm oil trade,’ MacLennan said. ‘Now, we understand that this sort of commitment cannot be limited to just select commodities or supply chains. That’s why I am proud to announce today that Cargill will take practical measures to protect forests across our agricultural supply chains around the world.’”
Unfortunately, this has not taken place.
When I hear a statement like “Cargill is the worst company in the world,” I don’t assume it’s true just because somebody said it. But former U.S. House Rep. Henry A. Waxman of California, who is now chairman of Mighty Earth, said this because he has been watching closely for many, many years the facts and figures regarding Cargill’s destructive practices. He stated, “We kept receiving data, … of Cargill’s serious ongoing problems with deforestation and child labor.
“In my 40-year-long career in Congress, I took on a range of companies that engaged in abusive practices. I have seen firsthand the harmful impact of businesses that do not bring their ethics with them to work. But Cargill stands out.”
I was not surprised to learn that Walmart and McDonald’s are two of the companies that Cargill supplies, but I was very sad to learn that two other big customers are Costco and Aldi. To me, Costco and Aldi have always been shining examples of how to do business. So, it turns out that all of us who buy at companies supplied by Cargill are setting in motion the destruction of the rain forest. It’s like drugs: if there’s a demand, there will be a supply. I’m not quite sure how to organize the demand. Everybody needs food. At the same time, the supplier is not off the hook.
In the past, it didn’t seem like consumers needed to be so knowledgeable, but now it’s clear that we do. We need to know the good, the bad and the ugly.
A good thing is that Cargill is developing a product called Beyond Meat, which will use non-GMO peas raised in the Midwest. The bad and ugly thing is that the pea seeds are often treated with the carcinogenic glysophate.
I am beyond getting together with friends and sighing about our Earth: “Oh, I know, I know, isn’t it awful?” I’m ready to change my habits (which I’ve been doing for a long time already, but which I will continue to do as new information comes in) and now, in addition, I’m ready to demonstrate/protest, which is very difficult for me.
I didn’t go to the action on Thursday, Sept. 26 to address Cargill’s “Women in Ag” conference, meeting in downtown Minneapolis at the Hyatt Regency Hotel. But I did go to the Climate Strike on Friday, Sept. 20. I expected every kid from every school in the entire metro area to be there at the Capitol, but they weren’t.