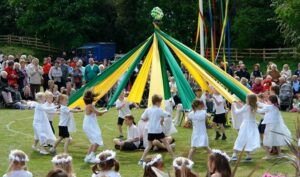 Maypole dance at Heart of the Beast Mayday celebration

Please help us celebrate Mayday next spring, on Sunday, May 3, in Powderhorn Park.
Like everyone else, we were shocked and saddened by Heart of the Beast’s decision to cancel their participation and organizing of Mayday for next spring. Last January HOBT started telling the press that this might be their last Mayday. They raised much more in fundraisers and donations than the $50,000 they normally needed to make up the difference between expenses and income. On the scale they were producing the event, it cost $200,000 to get all the porta-potties and permits. The principal actors were paid something but certainly less than they were worth. The documentary film premiere fundraiser in March had raised $15,000. Sarah Bowman gave them $275,000 in her will. But it wasn’t enough. “It’s too large of a thing for HOBT as an organization to coordinate on our own for multiple reasons. We simply don’t have the infrastructure to put on an event of that size,” Corrie Zoll, the executive director told City Pages. “I would love to see a much more decentralized model.”
We agree.
Bigger is not always better.
Let’s get back to the original meaning of Mayday.
Let’s do a free Mayday in Powderhorn Park.
Southside Pride will set up a soapbox and have music and speeches. We will not take out permits. We will not set up porta-potties or ask for police protection. We will not plug into electricity. The music will be acoustic. The speeches will not be amplified.
We hope other organizations will also set up soap boxes and have their own programs. There’s plenty of room in Powderhorn Park for everyone to express themselves.
The celebration of Mayday is a sacred ritual dating back thousands of years. The day is almost always just about midway between the spring equinox and the summer solstice. This year the equinox will be March 19 and the summer solstice will be June 20; the exact center would be May 4, but Sunday, May 3, is close enough.
The centerpiece of the celebration is the Maypole—people dancing around an erect pole holding strings and ribbons to show we are all connected to the tree of life. It has always meant a time of joy and pleasure as contrasted with that other pagan holiday halfway across the solar calendar, the date between the autumnal equinox and the winter solstice—Halloween, the Day of the Dead.
Mayday is a worker’s holiday. It is a day of joy, free of care. But it’s also a day of solemn reflection.
In 1886 there was a demonstration in favor of the eight-hour day at Haymarket Square in Chicago organized by socialists and anarchists. Police broke up the demonstration and killed one demonstrator and injured several others. The next day the demonstrators tried to meet again, and again the police tried to break up the demonstration. Someone rolled a bomb under a police van. The bomb blast and the ensuing gun battle claimed the lives of seven police and four demonstrators. Eight organizers of the demonstration were tried for the police killing, even though there was no evidence that any of them had thrown the bomb or fired on the police. They were found guilty and seven of the eight were sentenced to be hung. The eighth was sentenced to 15 years in prison. Four were hung. One committed suicide in jail. In 1893, the next governor criticized the trial and pardoned the remaining prisoners.
The Haymarket Affair became an international event to commemorate the struggles of labor. It radicalized a generation and energized a union movement. They won the eight-hour work day, and they won respect for the dignity of labor. In 1894, May 1st was recognized as a federal holiday honoring labor. Eisenhower changed Labor Day from May 1st to the first Monday in September, and declared May 1st to be Loyalty Day or Law Day, in a not-so-subtle rebuke of its radical origins. Today, most countries in the world still celebrate the first of May as a worker’s holiday and they honor the Haymarket martyrs.
We will be celebrating the ancient ritual of joy with music and the political ritual with speeches from local politicians and organizations.If you want to participate as a musician please send CDs or links to your music to edfelien@southsidepride.com and tell us what time you want to do your 30-minute set. We will be on the soapbox from noon to 6 p.m. And if you want to rant about politics or religion or your book club or whatever, email me your name, affiliation and what 5-minute (or less) time slot works for you.
Winter is coming, but on the other side of that is the awakening of spring and hope.
On Sunday, May 3, in Powderhorn Park, we will gather to celebrate.
Please join us.