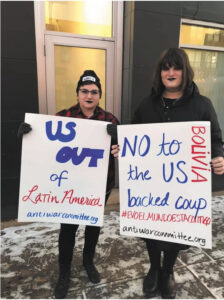 Fifty people rallied at an emergency response called by several Twin Cities area peace and justice groups to show opposition to the U.S.-supported coup in Bolivia.
The protest was held Thursday, Nov. 14, at 5 p.m. along the sidewalks at Lake Street and Bloomington Avenue in Minneapolis. The Minneapolis action was one of many protests happening all over the world in solidarity with the progressive movements of Bolivia.
The event was co-sponsored in Minneapolis by the Anti-War Committee and Women Against Military Madness.
A statement issued by organizers said in part, “We protest in Minneapolis to speak out against the military coup in Bolivia, and the role of the U.S. government in this coup. The people of Bolivia, who are struggling to defend economic and social gains won under the leadership of President Evo Morales, are struggling to stop this coup. The U.S. government is clearly the sponsor of the coup. The goal of the coup is to restore the absolute authority of the Bolivian elites who rule as clients of the United States.
“The U.S. government has worked overtime to turn back the left-wing tide sweeping Latin America. The struggle in Bolivia, and all of Latin America, continues between the forces that want to empower the people and those that want to maintain the power and wealth of the rich,” the statement continued.
Sarah Martin of WAMM said, “The whole history of the U.S. in Latin America has been to maintain the interests of large U.S. corporations in the region against any attempt by the rank and file people to take steps to rebuild society in their interests. The coup in Bolivia is only the latest example of this whole history.”
Evo Morales won re-election Oct. 20. In an open primary he got 47.1 percent of the vote and his nearest opponent got 36.5 percent. If a candidate got more than 40 percent of the vote and was more than 10 percent ahead of their nearest opponent, then there was no need for a general election and that candidate was supposed to be declared the winner.
Luis Fernando Camacho, a right-wing Catholic fascist from Santa Cruz, led his Youth Group from Santa Cruz in demonstrations that were violent enough for his fascist allies in the police and military to advise Morales to leave town because they couldn’t protect him. They beat members of Congress, burned their houses and ransacked Morales’ home. They have long been supported by U.S. agencies bent on destabilizing Bolivia.
When Camacho entered the Presidential Palace with a flag and a bible, the priest at his side said, “Pachamama will never return to the palace. Bolivia belongs to Christ.”
It is important to appreciate the deeply racist beliefs of Camacho and his followers. They are Mestizos. They claim some European ancestry, and this, they claim, entitles them to rule as the Spanish and the rich families have done for years. They consider the Indigenous as inferior.
Another important factor is that Bolivia contains 50 percent to 70 percent of the known reserves of lithium, a mineral essential for solar-powered batteries. Tesla and Canadian firms were negotiating with the Bolivian government, but Morales wanted a more socially responsible agreement. He was close to signing an agreement with a Chinese firm when the coup happened.
When Julius Caesar crossed the Rubicon River he ended the Roman Republic. When Franco invaded Spain, with the help of Hitler and Mussolini, he ended the Spanish Republic. The CIA has overthrown democratically-elected governments in Guatemala in 1954 and Chile in 1973 and established military dictatorships, but they flopped badly when they tried to invade Cuba at the Bay of Pigs in 1961.
Thousands of Indigenous people marched through the capital Thursday after the coup. They are well organized and disciplined. If there were another election today, Morales and his movement would win again, but, for now, the fascists in the police and military have won.