The Jordan River where Jesus/Isa was baptized. Photo by Beivushtang at the English language Wikipedia [CC BY-SA 3.0]

This holiday season, I am contemplating redemption. I am initially inspired by a nontraditional modern Christmas carol by Bruce Cockburn, dating from an album released in the early 1990s, “Cry of a Tiny Babe.” The chorus proclaims, “Redemption rips through the surface of time in the cry of a tiny babe.” Cockburn is a devout Christian (as well as a radical leftist), but I am concerned with more than the concept of redemption in traditional Christianity, broad as that may be. Before we distinguish other concepts of redemption, let’s examine what the currently orthodox Christian view of redemption, and set of “beliefs” about the birth of Jesus, are. Cockburn’s song casts familiar scenes in a different light. It starts out with a shocker: “Mary grows a child without the help of a man. Joseph gets upset because he doesn’t understand.” Interestingly, his view of the miracle of Mary’s pregnancy is a lot closer to the Islamic view of it than the Christian. Wait, Islam has a “view” of Mary and Jesus? Oh, indeed, and I will go into that more in a few paragraphs, except they are respectively Maryam and Isa. Islam, however, does not have a view of Joseph, at least he’s not part of Isa’s story in the way he is of Jesus’ story. In Islam, the entire people of Nazareth get upset because they don’t understand. More on that later. 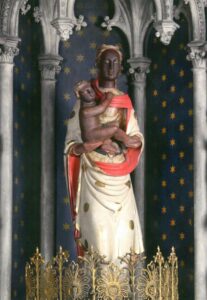 Continuing with our carol, the baby is born in the “fullness of time,” is visited by three “wise astrologers” who “get pretty close to wrecking everything,” because Herod, “a paranoid man” sends “death squads” after them, and they are forced to “head out for the border and get away clean.” In an interview on NPR 14 years after his song first came out, Cockburn explained: “I had this idea that, listening to the existing world of Christmas music, something I could contribute to it would be to try to retell the biblical story in contemporary terms, and I thought of it as a spaghetti Western in a way. You could take the same elements of that story and put them in a Sergio Leone film and it would be powerful. And in doing that, I brought the people into some sort of different perspective than you get from the biblical stories. The vision of Mary that we’ve inherited through history, for instance, doesn’t sound like any Jewish woman I ever met, so in the song she kind of has a bit more of a personality. …But Mary and Joseph are—I tried to make them human characters and multidimensional characters and Herod and the song just basically tells the story, but in different terms than we’re used to hearing it.”
There have always been some Christians who accept parts of this story and reject others. (Even the four Gospels have different stories.) Of course, a major debate about Jesus, which reflects on the philosophical debate about redemption, is his relationship to God. Jews and Muslims agree on rejecting, not the existence of Jesus, but his divinity, his being the “son” of G-d or of Allah, of the existence of “the Trinity” and whether that crosses a line into polytheism. Seriously, wars have been fought and people have died over these questions, and that is just among the self-avowed Christians. In modern times, we have theologians who research the “historical Jesus” and therefore have other quibbles, doubts and strained explanations. The late Marcus Borg was one of the most eloquent and beloved of these modern-day doubters. After recounting the list of Christmas miracles—virgin birth, star of wonder, wise men, prophecies—he wrote: “To be candid, I do not think that any of this happened …Yet I am not a ‘debunker’ of these stories. I do not dismiss them as ‘fables’ or ‘fabrications’ or ‘falsehoods.’ Many in the modern world do see the two options as ‘it happened this way’ or ‘it didn’t’—and if it didn’t, then we are dealing with delusions and deceptions …There is a third option. Namely, the Christmas stories with their miraculous elements were not intended to be ‘factual’ in the sense of reporting what actually happened. Rather, they are early Christian testimony, written roughly a hundred years after Jesus’ birth. They testify to the significance that Jesus had come to have in their lives and experience and thought. The stories are parabolic, metaphorical narratives that can be true without being factual.” Not surprisingly, this third way does not appease the fundamentalists, who label Borg as a “false prophet.” 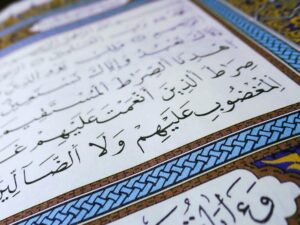 Jesus is the most-mentioned person in the Quran by reference; 187 times in all, 25 times by the name Isa directly.

In Judaism, the concept of a redeemer is part of Mosaic law. There is the goel or kinsman-redeemer, who is a family member with the duty to redeem things lost to debt or disaster and keep them in the family. This is the basis of the story of Ruth, and how she, a polytheistic woman of Moab, a very young widow, came with her Jewish mother-in-law to Israel and married Boaz, which led to the founding of the line of King David, and ultimately to the birth of Mary/Maryam who bore Jesus/Isa. So that was some act of redemption on the part of Boaz, who is barely known and yet, in a sense, altered history. We know that there must have been a non-transactional, spiritual meaning to redemption as well, because in the book of the same name, Job suffers on his bed of ashes but cries out, “I know that my Redeemer lives!” This came to be identified by Christian scholars as yet another Jesus prophecy, but whatever, that’s what they do. 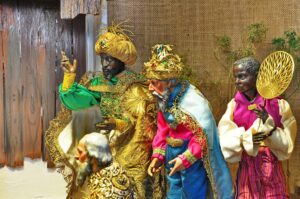 Lavish, often full-size Nativity scenes popularize the Christian narrative. This is one of scores to be found in Bamberg, Germany.

The concept of redemption and the concept of sacrifices are closely aligned in both Jewish and Christian scripture. This is how we get Jesus, possibly (in my view) “just” a prophet, but one whose main message was “God does not want your burnt offerings and legalistic piety, just love one another,” and yet who was apparently made a sacrifice himself. One part of the Mosaic law on sacrifices relates to the red heifer. In a marvelous display of sibling rivalry, the Quran shows Allah thoroughly trolling the Jews over this red heifer business in Sura 2 “Al-Baqara” (the longest sura in the Quran). To shorten the tale, Moses says they need to sacrifice a cow, and the people say “what kind of cow?” Moses goes back to God and comes back with “a heifer.” But what color of heifer? A golden shining yellow one. That’s pretty rare right there, but no, they demand even more restrictions. “We can’t tell one cow from another, how do we know?” It’s never plowed a field or worn a yoke, and has no blemish on it. According to Islamic scholars, this “displayed the stubbornness of the Children of Israel, who asked unnecessary questions of the prophets without readily following any commandment from God; had they slaughtered a cow, any cow, it would have been sufficient for them, but instead, as they made the matter more difficult, God made it even more difficult for them.” It’s worth noting that some (Christians again, surprise!) equate the red heifer with Jesus. Also, some believe the second coming of Jesus cannot occur until the Third Temple is built in Jerusalem, which requires the appearance of a red heifer born in Israel. Clyde Lott, an American cattle breeder, is attempting to breed red cows (which are currently nonexistent) and export them to Israel in the hope that this will—ahem—immanentize the eschaton. (Google it.) 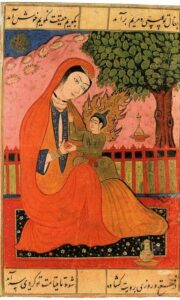 Persian image of Isa and Maryam

So, the Islamic stories of Isa and his mother Maryam are intriguing, including many of the same elements as the Christian story (virgin birth, cousin John the Baptist, miracles, Bethlehem birthplace) and lacking many others (no manger, no betrothed husband, no wise men, no shepherds). Instead of a manger, Maryam, who fled to Bethlehem to escape the angry neighbors and relatives who didn’t believe she was still chaste, was provided by Allah with a formerly dead date palm tree to labor and give birth under, and a magic holy spring for water. She was told to pat the tree if she needed dates and they would fall into her lap. Later she went back to Nazareth to try to rejoin her family. The people wanted to punish her for having a baby out of wedlock, but the infant Isa spoke from his cradle to defend her and they withdrew in awe. This was Isa’s first miracle. He went on to fashion a live bird from clay, to heal lepers, to raise four people from the dead, to call a giant cooked fish down from heaven to feed a multitude, and to be given a Book from Allah, the Injil (gospel), which makes him a Messenger, at least on a par with Muhammed.
The date palm tree and Isa speaking from the cradle recall another lesser-known Christmas carol, the Cherry Tree Carol. Here, Joseph is again doubting Mary’s chastity, and refusing to gather cherries for her, at which Jesus speaks from the womb, and commands a cherry tree to bow down so that his mother may have cherries. Unlike Marcus Borg, with all due respect, I believe each and every one of these stories, although the one about Clyde Lott really strains my credulity. Have a happy and peaceful holiday, whatever you believe! 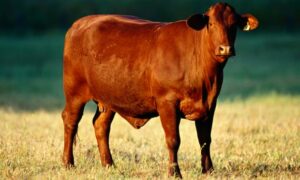