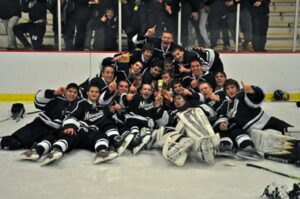 After graduating 10 seniors in a 9-13-3 2018-2019 season, the Minneapolis boys’ hockey team looks to refocus for the 2019-2020 season. Despite graduating nearly half their varsity team last year, the boys still have 11 upperclassmen this season, including six seniors, many of whom have a couple seasons of varsity play already under their belts. These upperclassmen are expected to be leaders for this team. They will show the younger skaters the way, building a foundation for years to come as the team tries to find its identity.
The team officially started its new season when whistles blew to begin practice on Nov. 11 in their practice facility, the Parade Ice Garden. The hockey season is long and grueling, possibly lasting until a couple weekends into March. That being said, especially with a young team, staying fresh is the key, which can be done perhaps by scheduling days off based on how the team feels in busy parts of the season, or even by rotating players to give starters a rest and allowing younger players to gain varsity experience.
For many, this will be their first experience playing at this high of a level; learning curves and rough patches are expected. Though there may be some rough patches for the boys this season, expect them to persevere and thrive through any adversity that may come their way. This is a skill that will carry these young men through life. This team and its coaches understand that hockey is more than just a game. Especially at this level, it’s a way to help young boys progress into mature adults. The skills they gain from this sport are necessary skills that will be useful in all aspects of life. It’s important to understand that this is just one piece of the puzzle.
Though relatively inexperienced, Minneapolis will be put in the spotlight this season because of its nationally televised game in January. As part of “Hockey Day in Minnesota,” the Minneapolis boys will square off against Warroad, a hockey powerhouse from the north, on a Saturday game that will be televised by Fox Sports North. Although being the underdogs in this game, Minneapolis has one advantage: They will be the hometown team, playing in front of friends and family from around the area. This game is a once-in-a-lifetime opportunity, and the boys will surely use what they learn from it as they progress as a team.
Under the spotlight of national television, the boys will learn how to adapt to this type of atmosphere so that when they begin playing in big games, they will not be shell-shocked, as they will have had prior experience. This experience will carry them a long way as the boys will be prepared for later on in the year, or in the next couple of years as they try to win big games, and maybe even win the section, which would punch them a ticket to the Minnesota State Hockey Tournament at the Xcel Energy Center (home of the Minnesota Wild) in March.
The Minneapolis boys’ hockey team has a lot to look forward to. With a young core, and experienced upperclassmen to mentor them, and many opportunities this year to accumulate even more experience, this team has a bright future ahead.