Minnehaha Senior Living, an assisted-living community located in South Minneapolis, has recently added a new library for its tenants and dedicated it to Henry Wadsworth Longfellow, the poet famous for writing “The Song of Hiawatha.” Doug Ernst, a local historian and Longfellow reenactment presenter, came to Minnehaha Senior Living to talk with Molly Blomgren, Community Life Director about a re-enactment presentation. 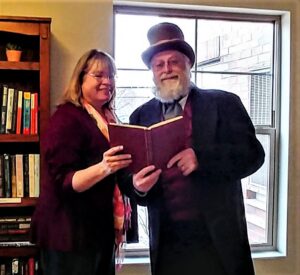 Longfellow was born of privilege, the son of Mayflower emigrants and a Revolutionary War general. His father founded Bowdoin College, and Bowdoin College offered him his first job as librarian, requiring one hour a week attendance to duties. He refused and demanded a higher salary. The college relented and Longfellow began his long, tethered relationship to academe.
Much was made in the 19th century about Longfellow’s “Song of Hiawatha” borrowing from the Finnish saga “The Kalevala.” Both epic poems share the same narrative outline and moral. The heroine dies, a victim of starvation and a harsh winter:
“O’er this cold and cruel country,
O’er the poor soil of the Northland.”
— from The Kalevala.Longfellow had studied in Finland. He knew “The Kalevala,” and he probably understood the threat of extinction that hung over the Finnish people. The Finns and the Hungarians share a language unlike others in Europe. They were the two most western outposts of the Mongol Empire in the 13th century. Natives of the regions also share a Mongolian fold, a slight slanting of the eyes—common to Finns, Hungarians and neighboring regions (e.g. Melania Trump).
When Nordic and Goth tribes invaded from the south, the Mongols moved out of the way, farther north. Enough remained to intermarry and leave their mark upon their Nordic conquering tribe, and leave a tragic memory of a culture lost and destroyed.
Longfellow must have seen the parallels to the Finns mourning the loss of their Indigenous peoples with the contemporary genocide of the American Indians.
“The Song of Hiawatha” was written in 1855. The memory of the Trail of Tears in 1831, the forced resettlement of Cherokees that resulted in 4,000 dying from cold and hunger, was still fresh in people’s minds.
Something even more fresh in people’s minds was the installments of “Uncle Tom’s Cabin,” or “Life Among the Lowly,” written by Harriet Beecher Stowe beginning in 1852. Her book inspired such deep sympathy with the struggles of African Americans that it motivated a nation to go to war to end slavery.
Longfellow, no doubt, hoped “The Song of Hiawatha” would inspire similar sympathies for the First Americans.
Doug Ernst will do a reading of “The Song of Hiawatha” and give a talk about Longfellow’s life on March 13 at 2:30 p.m. in the Activity Room, Minnehaha Senior Living, 3733 23rd Ave S. The talk will be open to the public. Everyone is welcome. Doug will be in costume. He is the executive director at the Richfield Historical Society and is a regular speaker there as well.