Working for an end to police brutality and murder: It’s a new paradigm

Last Monday on June 1, me and my roommate George signed up for our shift as neighborhood watchmen— Powderhorn’s response to a failed police system and several nights of fires in South Minneapolis. Our shift was 2 – 4 a.m. patrolling the blocks from 31st to 33rd on 10th and Elliot Avenues. There was a neighborhood-wide and South Minneapolis-wide panic of a white supremacist presence. Probably linked to the “outside agitator” rhetoric (which anyone who attended the demonstrations would understand to be false). 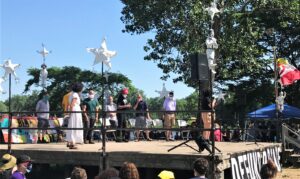 That night the neighborhood was very scared. There were many rumors being circulated, such as that the KKK was gathered in full uniform in Powderhorn park, and the Boogaloo Boys were attacking Midtown Global Market. I am unable to speak to the validity of those; we saw neither on our patrol. George and I walked our four block radius, each in our bright yellow T-shirts, mine saying “Minnesota,” his saying “East Lake Liquors.” I carried a fire extinguisher to put out any fire a Neo-Nazi might attempt to start. We came across no outside agitators, no white supremacists.
We only saw other concerned neighbors wondering if we were outside agitators or white supremacists. And we were thankful. I have not felt more proud of something in my life. While I am young, it is incredible to see firsthand how a community will be compelled to act against a racist police force. There were spreadsheets, Google documents, group chats and a Facebook page created very quickly. Several neighbors took charge, organizing immediately on how best to keep ourselves safe, and how not to call the police.
Now I believe comes the hard part. I fear that the neighborhood watch portion of this community involvement will be too militant. Our responsibility is not to fill the shoes of the Minneapolis Police Department. Not to photograph every suspicious vehicle and every stranger that might walk down Chicago Avenue. Our responsibility is to our neighbors. To take care of each other and foster change. We need medics, social workers, and people ready to de-escalate and help in every circumstance where any police officer would hurt.
On June 7 a meeting was held in Powderhorn Park by Southside Response in collaboration with Black Visions Collective and Reclaim the Block. Black Visions Collective and Reclaim the Block are organizations working on Black-led transformative justice and divestment of police funding into community programs. Nine of our City Council members were present and made a pledge to work toward police abolition. I spoke to Sam Gould, who lives in Powderhorn, about his involvement and organizing with Southside Response. I asked him how Southside Response started. “It was the experience we were all having, that Friday night (May 29). The whole neighborhood was on fire, gunshots, breaking glass, explosions shaking the house. I have never experienced anything like this. For one minute I was on the phone with the mayor: ‘Jacob, what the f#$k is going on? You’ve got to do something.’’ I can’t imagine who would have handled that situation. I spoke to our council person, Alondra Cano, that night as well. I said to her if we ever thought the city or the state had our backs, it is more than obvious right now that they don’t—we need to organize ourselves. So, at midnight that night we made an event. “We are the only people who can protect ourselves and we are the only people who can care for one other. Let’s figure out how to do it.”
The following day, June 1, was the first meetingof Southside Response. Around 1,000 from the community showed up, and we discussed how we were going to keep ourselves and our neighbors safe.
I asked Sam what he sees for Southside Response next. He wants to make it clear it is not an organization, and it is without hierarchical positions. “I want people to realize it’s theirs. It’s a social tool.”
Finally, I asked Sam how he felt as he left the meeting with Black Visions Collective, Reclaim the Block, and the entire community. He quoted Gramschi’s “Pessimism of the intellect, optimism of the will.”
I agree with Sam, the hard part is far from over. Now is when the community gets to work reimagining how to care for one another without police.