Friendship Academy of the Arts grade school to expand 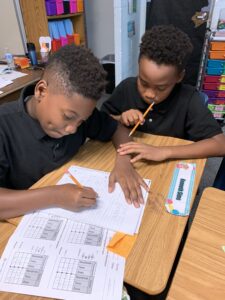 Teamwork: two fourth-grade boys work together at Friendship Academy of the Arts.

The original plans were for a huge ceremony and celebration to mark the literal groundbreaking at the Friendship Academy of the Arts site in March. But the lockdown caused by the COVID-19 virus made large gatherings and public celebrations impossible. Instead, the groundbreaking ceremony on April 17 was virtual.
Students, parents, faculty and administrators watched live-streamed ceremonies, sharing photos of themselves in artistic hardhats and shovels. The ceremony went live on Facebook and YouTube with more than 1,100 people taking part.
The new building, at 3320 41st Ave. S., will be home to students in the third grade through the newly added eighth grade. Kindergarten through second graders will remain in the original building during the 2020-2021 academic year.
Right now, the school has 165 students, but next year the hope is to more than double student population. “We hope to increase the number of students to 350,” said Executive Director Charvez Russell. The school is currently taking applications for the fall.
Why all the excitement over a new school building?
In 2016 Friendship Academy was named a national Blue Ribbon school, the only school in Minneapolis to ever receive that honor, said Russell. The National Blue Ribbon Schools Program recognizes schools based on academic excellence and success in helping close achievement gaps. Minnesota has some of the worst educational achievement gaps among low-income and minority students in the country and Friendship Academy is doing its part to change that. 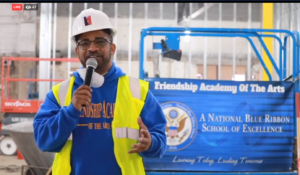 Friendship Academy combines arts education with academics, and, said Russell, “we are doing it at a higher level to give the students involvement in the community and give them a chance to explore their artistic ability. Our model educates the whole child.”
Instead of separating subjects into isolated classes like math, social studies, science and English, the school’s philosophy is that while creating art, students will remember what they have learned if they have created something while learning. The idea is to generate students who are grounded in who they are as artists as well as academically.
The arts at Friendship Academy include more than just visual arts. “It’s not just drawing,” said Russell. The programs include integrating arts such as dance, music and creative writing incorporated into more academic subjects. Arts as diverse as yoga, African drumming and line dancing are part of the curriculum. The school had planned to create a chess club but that was interrupted, at least until next year, by the COVID-19 school shutdown.
Teachers and visiting artists plan ways to use arts to teach standard academic subjects such as reading, math, science, social studies and physical education.
The Flowers for Kids program, for example, combines learning about parts of flowers, what flowers need to grow, and how to combine flowers to create a flower arrangement, combining arts and biology.
Guest artists include not just experts in the fine arts but members of the Black Data Processing Associates to introduce students to hands-on computer technology. Students can learn safety topics from experts from the Red Cross.
“We believe every child is an artist and that art is not just drawing, it’s innovating and creating,” said Russell. “These skills will allow these students to grow into adults who can participate successfully in the economy.”
The school was not always the glowing example for academics that it is today. Only a decade ago, the school was an underachiever compared to others in Minneapolis.
In 2009, the state passed legislation to increase accountability in charter schools like Friendship, so the school’s board of directors came up with a 12-point plan. Problems persisted, but soon, with more changes, including projects to get parents more involved and requiring student time in the new computer lab, the students began to rise above and shine.
The biggest change was to use an education strategy called differentiation. With this technique, teachers tailor instruction to meet the unique needs of specific students with the understanding that no two students learn in the same way. This method of understanding and identifying the needs and interests of each child and then paying attention to each student’s growth became the key to student success and the success of the school.
The method is popular not just with students but with teachers as well. Of the 18 teachers at the school during the 2019-2020 school year, 90 percent are staying on for next year. Members of the student body and the staff see Friendship Academy as more than just a school; it’s a tight-knit community as well. “Schools and teachers need to know what each kid needs instead of a ‘you get it or you don’t’ attitude,” Russell said.
“But,” he said, “it’s not one answer, it’s a combination of a lot of things. That includes relationships and connecting with families. It means paying attention to individual child data.”
And, with minority students, there are sometimes cultural miscommunications with how students communicate with authority figures, he said. “What we offer helps close that gap. The first thing is to instill confidence in students, teaching them that you are who you are. I see this as one of the biggest things.”
In 2020, the student body was 96 percent African American but represented 20 countries, said Russell. Next year, the school is prepared to welcome a more diverse student population. “Every child that comes in, we want to make sure they feel great about themselves,” he said. “Our mission is to educate each student to be proud of who they are as we bring on a more diverse community.”
The school is looking to the community for volunteers as reading tutors for next school year through Reading Corp. To volunteer, apply by July 27 at readingandmath.net.
The school is also currently taking student applications with a deadline at the end of August, but Russell said the school “will continue to accept applications until we don’t have room.” Last year, there were 90 to 100 names on the waiting list.
While there is no entry exam and the school accepts anyone who applies, they do an initial assessment to see where to put new scholars, Russell said. “We feel confident that next year, our 20th year, we will continue to deliver high quality education.”
Parents wanting to enroll their kindergarten through eighth grade students for the 2020-2021 school year should contact Friendship Academy for the Arts at school@friendshipacademy.org or 612-879-6703.