Last month we introduced a new feature on our website—exclusive interviews with Stephen McClellan and musicians from local rock bands—Yellin’ at McClellan. He was going to have a new program this month featuring The Lanes, but “the George Floyd killing has definitely shifted the nation’s priorities and both Leo and I have been caught up in new timetables.”
The featured artists last month were Sargasso. They’ve come out with a new video: “At Night” by Bob 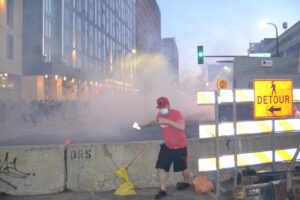 Nordquist. https://www.youtube.com/watch?v=tZPfDwskiZI
If I could think at night, I would formulate solutions/
Instead of inward spirals of fear/
It isn’t black and white, we all claim the constitution/
Ignore the things we don’t want to hear/
I need someone I respect to tell me everything is alright/
But the scholars and the poets all cry themselves to sleep at night.
And the politicians say they’re going to do something, but when they’re asked “What?” they say, “I don’t know.” And the beat goes on.
Dave Tilsen wrote: “In the days following the police murder of George Floyd, the elected and appointed officials of St. Paul, Minneapolis and Minnesota used fear mongering, hyperbole and misinformation to terrify their citizens and get them to accept the national guard and virtual martial law.”
Dave did this collage of local newscasts: https://youtu.be/yKJFKf8wUC4
If you want more, Debra Keefer Ramage took these 15 pictures of Lake and Minnehaha on May 30: https://www.facebook.com/photo.php?fbid=10158596251241204&set=a.10158596250476204&type=3&theater
And Nathan House, our new production assistant for New Media, took these photos of the May 28 demo downtown:
https://drive.google.com/drive/folders/1w-pa6pFI0BVxy31GGTXgFmxoVJ25mNgG
And, now for something completely different.
How would you like to make a low-fat burrito bowl? Jocelyn Graef assures us it’s fast, easy and vegan. Delicious healthy and simple. No oil, sugar or salt.

The Minneapolis Institute of Arts writes, “While our galleries remain dark, you can visit us virtually. Enjoy this series of short videos highlighting artworks featured in the exhibition “When Home Won’t Let You Stay: Art and Migration,” narrated by Gabriel Ritter, Mia’s head curator of contemporary art. Click here to watch them all: https://vimeo.com/showcase/art-migration
Does all this make you nostalgic for the ’70s and anti-war demonstrations? Here is a 22-minute fragment from a documentary I produced for Experimental College in 1972:
https://www.youtube.com/results?search_query=experimental+college+1972+ed+felien