We don’t run the country, but we make it run 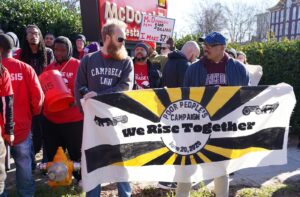 Mindy Bergeron-Lawrence is 35 years old. She has worked for McDonald’s for 17 years. Mindy is an essential worker. However, McDonald’s doesn’t give her sick leave. She stated in the Poor People’s press conference on May 13 that “without paid sick leave and without a living wage, it doesn’t feel like we have a choice. We will go to work sick because we can’t afford not to. That was the reality before this pandemic.” Mindy calls for sick leave and a living wage. Since she was hired, she only makes 30 cents more per hour. Mindy and other essential workers, as Rev. Dr. Barber would say, don’t run the country, but they make it run.
On June 20, 2020, a Mass Poor People’s Assembly will take place virtually. The co-chairs of the Poor People’s Campaign, Rev. Dr. Liz Theoharis and Rev. Dr. William J. Barber, call you to no longer be complacent in this country’s immorality. During this unique time, glaring inequity ensues. As many states opt to reopen gradually, there is little regard for essential workers, and the profit of the few is prioritized over the needs of the majority. The Poor People’s Campaign is trying to realign this country’s values to serve the majority with policy recommendations and digital actions, such as the June 20 virtual march.
Theoharis stated that “before the COVID-19 pandemic, almost 700 people were dying every day in the United States because of the crisis of poverty because this nation has a high tolerance for death. Especially when it is poor people, people of color. The national response to this pandemic has only further exposed this country’s distorted morality.”
According to Theoharis, the four relief bills passed do not address the needs of the majority of people. The bills passed by Congress need to include health care for all, sick leave forgiveness, and a moratorium on eviction and rent. The Poor People’s Campaign: A National Call for Moral Revival has launched a new campaign: Stay in Place! Stay Alive! Organize! The campaign aims to raise the moral cry for non-cooperation with the dangerous and reckless policies that are being proposed.
The demands that the campaign covered in the press conference were:
*Universal guaranteed income
*Income protection (hazard pay) recognize that there is a risk to return to work
*Health care for all
*Sick leave forgiveness
*Adequate testing and Personal Protective Equipment (PPE)
*Care for people who need to be isolated, such as alternative housing
*Moratorium on eviction and rent
The June 20 march was originally planned to take place on Pennsylvania Avenue on the National Mall. Now the campaign is planning to hold the largest digital and social media gathering of poor and low-wealth people, moral and religious leaders, advocates, and people of conscience in this nation’s history.
The Poor People’s Campaign and the Kairos Center for Religion Rights and Social Justice invite you to spread the word about June 20, 2020, with your congregations, communities, virtual campuses and social circles.
To register for the June 20 virtual march, visit https://www.poorpeoplescampaign.org/june2020/.
Email minnesota@poorpeoplescampaign.org to get involved in the Minnesota Poor People’s Campaign to challenge the evils of systemic racism, poverty, the war economy, ecological devastation, and the nation’s distorted morality of religious nationalism.