Defending the homeless in Powderhorn Park 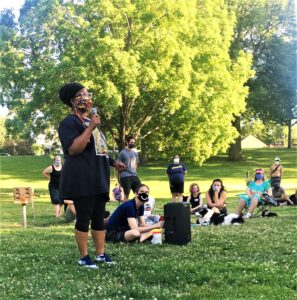 Hennepin County Commissioner Angela Conley spoke to the crowd.
Earlier she wrote: “Council Member Cano has not responded to my request to coordinate so I have been working with other jurisdictions.” Council Member Cano sent out an email: “I did receive a message from Commissioner Conley on Sunday night and I’m looking forward to connecting with her sometime this week.” People at the meeting in Powderhorn Park had hoped that resolving the homeless problem would have been a more important priority for our council member.
The City of Minneapolis has majority interest in a football stadium just a few blocks down Chicago Avenue. Real leadership on the part of Cano and Frey would be to lead the homeless down to the Vikings stadium and give them all free sweatshirts and a safe place to pitch their tent. (Photo/Nathan House)

Friday morning, June 12. I made coffee and looked out on Powderhorn Park, but the view was not as I expected. There were about a dozen tents pitched in the park across the street from my house. I surmised what had happened.
A group of homeless people had been staying in the Sheraton Hotel by the Midtown Global Market. I had read that things were not going well there. It seems that some or all of the residents had moved to the hill by 10th Avenue in the park. I poured myself a cup of the coffee and went out front to think about this. I am very Covid-adverse right now, being in my 70s with various health issues, so I didn’t immediately run over to say hello. But after about an hour and a half, several squads of Minneapolis Park Police pulled up, some of them ON THE GRASS (one of my pet peeves), so I grabbed a mask and my iPad and walked over. They were rousing the sleeping campers and giving each of them a notice that they had 72 hours (48 crossed out and 72 written in) to leave the park, signed by Park Superintendent Bangoura. I talked to a few people, walked back home and started calling.
The Powderhorn neighborhood was prepared—we had been through a lot recently. Pandemic, police murder, major protest site, arson and looting. We opened up our Google docs, started up our WhatsApp chats and phone trees.
By 11 a.m. the press had arrived, the PPNA representative said that eviction was not supported, and by noon the park superintendent had withdrawn the 72-hour deadline.
The weekend was spent supporting the campers, talking to neighbors and trying to get some kind of response from elected officials. Basically, what we got was:
1. The city said this was the county’s responsibility. Alondra Cano was too busy with police reform to come to the park. The mayor would not return calls.
2. The county does not have the money. They are looking to the legislature. Angela Conley would come meet, but she is only one commissioner.
3. Aisha Gomez said that she could get help passed in the House but the problem was in the Senate.
4. Jeff Hayden said the Republicans didn’t want to help the city or poor people. That our hope lies possibly with Jennifer Ho, the state Commissioner of Housing.
By Monday the number of tents on the 10th Ave. side had grown to cover most of the flat, and there were tents across the park. A meeting of the west side of the park was called. At the meeting (about 50 people) there were various levels of concern for the campers and for the non-campers, but everyone wanted a solution that did not involve police eviction. People talked about drug needles being found and the concern about their children and safety of the park. We were told by a county employee that there were 400 homeless people in Hennepin County and that they currently had four beds available for single men.
On Tuesday night, a larger meeting of about 200 people was held. A demand that a solution be found by Friday, June 19, was presented. All of the elected officials were invited. Hennepin County Commissioner Angela Conley and Park Commissioner AK Hassan were the only ones who showed up. Angela Conley endorsed the Friday deadline, although I am not clear what will happen if/when the deadline is missed. Legislators Aisha Gomez, Hodan Hasan, Patricia Torres Ray and Jeff Hayden left messages that they were in session and were supportive. The mayor and Council Member Alondra Cano did not appear.
The community has expressed a large amount of care and concern for the campers but also has put a lot of pressure on the decision-makers to find secure long-term solutions for these people. My wife, Barb, remarked these are displaced peoples, refugees, like we are seeing all over the world. That puts it in perspective, we have a refugee camp forming, a border crossing. It is a human tragedy unfolding in my front yard.
I am proud of my neighbors, but ashamed of my city.