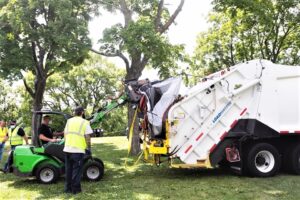 Dateline: Monday, July 20, Powderhorn Sanctuary, 14th Ave.
Front loaders are removing the tents of the homeless campers. Police are forming a line. This is being streamed live by Unicorn Riot, and hundreds of supporters arrive. People are angry. They say the arrestees are Indigenous people on their own land.
Let me break down how we got there.
There have been encampments in Powderhorn park for over a month. The park officials first said the campers had 24 hours to leave, then 72 hours, then that was rescinded and they could stay. The neighborhood association, ad hoc, and ongoing organizations stepped forward to support the unsheltered (which has become the preferred term to homeless) folks. Many more came, a second camp started and they were dubbed the east camp (on 14th) and the west camp (on 10th). Camps also spread to other parks, including one in front of the park superintendent’s residence in Lyndale Homestead.
The Park Board voted down a resolution to limit the camps to a small number of tents. Tension was rising as people had no way of knowing if they were going to be allowed to stay, and the on-again off-again Park Board was really destabilizing.
The counts of the people in Powderhorn were varied. The Park Board published a count of number of tents at Powderhorn updated daily. It peaked at about 570. Some people said there were 1.5 to 1.75 people per tent, so we had over 800 people. Others said that people had multiple tents and the count was closer to 250.
It was a village, and there were all kinds of people. There were sexual assaults, some of minors. People were concerned; some women and children moved to another camp at a “secret” location for safety. Fox News aired a report on predation there and outed the location. The east camp began to get seriously dangerous. There were gunshots regularly heard, people were taken to the hospital, and then the volunteers at the east camp said they no longer felt safe and were leaving. They said a criminal element had taken over. A self-proclaimed leader told people they couldn’t come in, or leave.
The Park Board met and set up a silly permit system, and gave the superintendent the power to do what he thought he needed to do. He said the east camp people needed to move by July 20, and the west camp had two weeks to get down to 25 tents. That’s not going to go well.
Alondra Cano called a meeting in the park but then canceled it due to safety concerns. The DFL planned to do voter registration on Saturday, June 19, but canceled after council members said they had information that the park was not safe.
So, on Monday the 20th, most all of the east camp moved. They were given help locating to other parks or shelters to move to. Two tents, about 10 people, refused to move. They talked to social workers, volunteers and police. They were given every opportunity to move. They refused. They were arrested along with four or five supporters with no violence on either side. Some people are outraged, some relieved.
It was clear to everyone at the camp that the all-volunteer effort to provide safety was not working and could not work. We called, and yelled at, and begged for the city to recognize that these were citizens and deserved the same level of services as other citizens. The camps were like the neighborhood in “The Wire,” lawless.
From the Minnesota Sanctuary Movement:
“Powderhorn Sanctuary residents and volunteers have been at risk of violence not because of a failure of volunteers, but because of the lack of any coordinated response by our representatives and electeds (sic), a buildup of decades of absolute neglect in the area of dignified housing, and centuries of structural violence…We will not accept racist displacement at the hands of the police as the only government response to decades of neglect. Sanctuary volunteers are helping residents move as best as they are able, but the park’s new permitting system is not workable, the incompetent city has no solutions, and the county and state have not accepted responsibility.
“We cannot accept the exhausted refrain that ‘government moves slow.’ There are vacant public housing units now. The county could act to purchase hotels, transition rooms to single-room-occupancy units and approve more harm reduction beds now. And the state, which has demonstrated an astonishing lack of leadership, could use CARES dollars to fund long-term solutions now.
“Displacement is a disease, and housing is the cure.”