Cargill could save the day 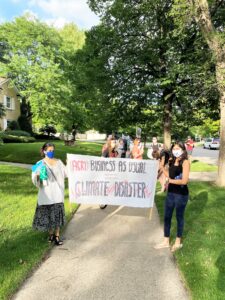 Our times
We live in a time in which the lovers of life and the haters of life are pitted against each other and I am nervously waiting to see if the lovers will win. I am a big fan of co-existence and flexibility and nuance and all the ways people can learn to live together despite their differences. But, when I look at this particular division, I don’t see how the two groups can live together peacefully. Creation and destruction of course are equal natural forces as represented in the Hindu triumvirate of deities, Brahma, Shiva and Vishnu, and I could always resonate with the truth of that, but at this point in history, it seems like a pervasive disregard and irreverence for life is winning. The balance is off. Our entire planet is at risk and people keep deforesting the Amazon, polluting waterways everywhere, extracting minerals in pristine territory, obliterating Indigenous rights, etc. And what does this activity generate? It generates money (control) for a few and death for many. None of this can be stopped with violence because such attempts would only result in more money for a few and death for many. Violence is futile.
Peaceful protest and economic threats, although not as effective as I might like, are our best tools for saving our Earth. I’m very heartened to see all the old faithfuls, the people working diligently and without fail, on climate and environment, which, ultimately is our gravest issue and gives rise, I believe, to all the others that have come to the forefront since then.
The pervasive attitude of disregard for our Mother Earth underlies the disregard for life that we are seeing to the max right now, and especially plainly in the cruel death of George Floyd.
Protest at Cargill CEO’s house
Mighty Earth, a global campaign organization that works to protect the environment, initiated a protest Wednesday, July 29, at the home of David MacLennan, CEO of Cargill, Inc., the Minnetonka-based privately held global food corporation. About 30 protesters arrived around 6 p.m., held signs, gave speeches, chanted and then left. It appeared that Mr. MacLennan wasn’t at home. In any case, he didn’t come out to talk with them.
Their signs and masks decorated with Cargill’s logo and the slogan “helping the world burn” referred to Cargill’s contribution to massive fires last year in the Amazon and to the fires anticipated this year. They were protesting not only the destruction of the rainforest but resulting Indigenous human rights abuses as well.
University of Minnesota student and protest organizer Steve Szathmary said, “I’ve never marched to a CEO’s house before, but we have only 10 years to address the climate crisis and Cargill’s stubbornness has left me no other choice.”
The protest was part of a larger campaign on Wednesday, the 29th, to meet with owners and managers of grocery stores who buy from Cargill in 10 states in addition to Canada, the U.K. and the Netherlands, urging them to cut contracts with Cargill.
A Costco customer in Spokane wrote a letter to the editor of Spokane’s Spokesman-Review: “ …One of Costco’s major suppliers of meat is Cargill. Cargill is a corporation with a horrible environmental record. From deforestation in the Amazon to being a major polluter of waterways, Cargill does not match with any vision of a sustainable future. Until its practices change, companies like Costco should cut ties. Costco deserves praise for its push for sustainability in its stores. …”
Destruction of the rainforest
According to two detailed reports put out by Mighty Earth in July and August of 2019, deforestation in the Amazon means “loss of biodiversity; destruction of renewable resources; climate change; destruction of Native homelands (Many Indigenous people living on the fringes of the forests have been displaced, sometimes multiple times, and are in effect living as environmental refugees in their own country.); soil erosion and floods; changing the weather.”
mightyearth.org/cargill and

The Companies Behind the Burning of the Amazon

Logging and farming have destroyed huge areas of the rainforest (15 to 17 percent); 25 percent would be a tipping point from which it couldn’t return—that is, when the rainforest would no longer be able to produce its own rainfall.
Huge swaths of the Amazon rainforest have been and continue to be cleared to grow soy to feed cattle. That’s the soy Cargill buys to feed the cattle they raise and sell. Jair Bolsonaro, president of Brazil since late 2018, has rolled back regulations and seems to have no concern for the necessity of preserving the rainforest nor for the well-being of its Indigenous people. Thankfully, he is now being pressured to take steps to curb deforestation, says an Aug. 1 article in The New York Times.
Soy is raised in 10 major countries of the world, the top four being Brazil, the U.S., Argentina and China. Soy production and transport is increasing worldwide. As Mighty Earth reports, “The increasing global appetite for meat causes a booming demand for animal feed, and global soy production has increased more than tenfold over the last fifty years … Global demand is expected to continue to increase to 514 million tons by 2050 [as compared to around 328 million tons in 2020].”
An article from Reuters (May 2018) quoted the company Abiove as saying the expansion of soy production in Brazil, etc., was owed to a “unique ability to expand planted area.” (Is that a euphemism for deforestation?)
^ ^ ^ ^ ^ ^ ^ ^ ^ ^ ^ ^ ^ ^ ^ ^
Cargill’s broken promise
On July 8, 2019, Nathaneal Johnson wrote in Grist magazine, “In 2014, the world’s largest agri-business, Cargill, announced that it would stop buying palm oil, rubber, and other commodities from farmers who cut down forests to grow their crops. Around the world, environmentalists applauded, political leaders cheered, and corporate executives scurried to come up with their own plans to follow the company’s lead.”
Mighty Earth writes in its report: “In signing The New York Declaration on Forests, MacLennan and Cargill committed to ‘eliminating deforestation from the production of agricultural commodities such as palm oil, soy, paper and beef products by no later than 2020.’ ”
A year later Cargill extended its deadline to 2030. Now, with the original 2020 deadline approaching, Cargill stated it will not abide by that commitment. They essentially said last year already that if they didn’t buy from deforesting farmers, someone else would. CEO David MacLennan wrote on a blog post in 2019, “If Cargill alone takes action, the same practices that exist today will continue.”
However, there actually are smaller companies that have started buying soy grown under sustainable conditions in the Amazon. They buy from growers who are using some of the already deforested land, not newly deforested, and are using basic best practices. Why can’t Cargill do the same?
Economic threats, losing customers
I found this conversation from an environmental group on Reddit: “potatohonkey” asks: “Is there any meat supplier that isn’t responsible for massive deforestation?”
“Walrave” answers: “Not really, but the cheaper the meat the more it depends on imported rock bottom price feed which is more often grown on deforested land, or the cheapest imported beef, again from deforested land. It’s better to tackle this by reducing meat consumption, but not supporting the worst companies helps a bit. …”
I like Walrave’s idea of reducing meat consumption. That is more manageable than pressuring giant corporations to stop buying soy grown on deforested land. They will stop doing that naturally if nobody wants meat. McDonald’s, Burger King and Costco are big buyers of Cargill meat. So, if you buy from them, don’t. (It’s heartening to know, though, that McDonald’s, among other large companies, would like to see sustainable changes in Cargill’s supply chain.)
It’s hard to know who buys what from whom. Ideally, we should all get our meat from local regenerative farmers. (Sustainable meat might be more expensive, but then you just eat less of it—and save your heart.)
According to Cargill’s website, the company absolutely follows sustainable practices in the Amazon, and according to Mighty Earth’s investigators, they absolutely do not. I wondered: If Cargill’s practices are sustainable, why did the CEO sign the pledge to stop deforestation by 2020 in 2014 and then explain in 2019 why the promise could not be kept?

Publisher’s note:
Protest is good because it illustrates the contradiction of two forces. It is a demonstration of those two forces in struggle. But the point is not to remain in struggle, but to resolve the antagonistic contradiction through public discussion and political will. At some point we need to stop protesting and start running the government.