Focus on Bloomington Avenue in the 2020 Weirds 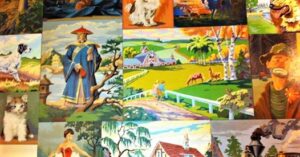 The mural inside Hot Plate restaurant

Bloomington Avenue is just not the same without the May Day Cafe. I had been about to write them off as never coming back, but I just missed the boat. Since early June, on alternate Saturdays, they have been having a pop-up sale / fundraiser event. The next one is Saturday, Aug. 15. The way they work is—no preorders, form a socially-distanced line outside, and enter the cafe one person at a time. They will have a great selection of their pastries and sweets, plus two or more healthy savory breakfast items. No drinks. “Profits” go to a small selection of pre-announced organizations. (Previous beneficiaries include Black Garnet Books, Full Cycle, the Minneapolis Sanctuary, Lift Garage, and Tubman Center. Black Garnet Books is looking to open the Twin Cities only black-owned bookstore in the near future.) Follow May Day Cafe on Facebook to keep up to date. They WILL be back full-time, someday.
There have also been murmurings about Gatherings Cafe, located within the Minneapolis American Indian Center (MAIC) opening back up to the public. I have no date or confirmation on that. As far as I know, they are still feeding elders, and relying on donations. They post most days on Facebook, either showing off the meal the elders are getting, or highlighting some of their amazing crew and volunteers. 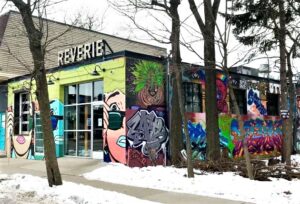 On the part of Bloomington north of Lake Street, Welna Hardware stands out as a great community resource that has mostly remained open throughout the 2020 Weirds. Not on social media very much, they are open seven days a week, more or less normal hours. They are part of the Ace network even though they don’t use the name.
In the Heart of the Beast Puppet and Mask Theatre, a block west of Bloomington on Lake, is still chugging along in virtual mode. It’s funny how things work out. When they announced over a year ago that 2020 was going to be a time out for their iconic MayDay Parade and Festival, everyone was pretty upset. We didn’t know how we’d cope, and some community members vowed to show up anyway, without permits, security, porta-potties or HOBT. But then every big event from mid-March to now was canceled, and we hardly noticed missing MayDay, we were missing so much of our “normal” lives. It occurs to me now that COVID-19 actually took the sting out of HOBT’s necessary if painful transformation project. Subscribe to their newsletter to keep informed of progress, future MayDays, and virtual events. hobt.org/get-involved/subscribe/
Across Lake Street, at Bloomington and Lake, is Mercado Central. Mercado Central’s many Latin American immigrant

businesses were hit hard by COVID-19 and later by violence and looting. A handy way to check on their status is via Instagram. A post on their account from March 17 lists phone numbers of the principal businesses, and you can call for an update.
At 34th and Bloomington, there has been an interesting business change. Former fabric and hobbyists store Glad Creations is closed and gone, but it’s been replaced by an innovative quilters’ consumer-owned cooperative. The 2020 Weirds came at a bad time for them, as for so many new or developing businesses, but they are still there. Go to their website at quiltshopcoop.com/ to sign up for a newsletter or join, or email them at their info@quiltshopcoop.com address. Or check out their Facebook page for random news.
Across 35th Street from the May Day Cafe (covered above) is Reverie, a vegan restaurant with beer and wine and vegan ice cream. We covered their previous spot on Franklin Avenue, which was forced out by gentrification, and covered their excellent food truck in the intervening years as they sought a new bricks and mortar home. They had been open just a short time at Bloomington and 35th when COVID-19 hit. They were just re-opening for take out when George Floyd was murdered and the whole neighborhood was absorbed with protests, supporting protesters, defending the neighborhood, and feeding people. Reverie took a big hand in feeding the unhoused and the food insecure and finally emerged intact in an early June reopening. They are now selling their delicious food through either online ordering or a walk-up window, with patio seating if you want to linger. There is a Pay-it-Forward option at $2.50 per meal (in sets of two meals.) If you haven’t tried Reverie yet, we strongly recommend it.
Near the corner of 38th Street and Bloomington is People and Pets Together. Originally billed as the only pet food shelf in town, P&PT has spawned imitators and collaborators as people realize that those experiencing the trauma of poverty, illness or homelessness need to keep their animal companions with them for emotional support and stability. P&PT has branched out to also delivering some of its free pet food to (human) food shelves and pantries, so clients can get it all in one trip, or have it delivered if they are housebound. P&PT has also teamed up with the Street Dog Coalition to offer periodic free vet clinics at their store.
Mama Sheila’s has reopened! Another one I had almost given up on. They set up a patio dining area along the sidewalk fronting Bloomington (they’re at the northwest corner of Bloomington and 38th if you didn’t know), but I believe they also have indoor dining within physical distancing requirements. We covered them before in The Dish—a very reasonably priced soul food buffet.
Another eatery we covered a year ago—Hot Plate—has also reopened after being takeout-only for a couple of months. Hot Plate is on Bloomington near 52nd Street. Hot Plate specializes in breakfast and lunch, with some offerings having a distinctive Mexicano twist. They are open every day except Tuesday from 8 a.m. to 1 p.m. Reservations required or you can still order takeout. See their website at hotplate.co for reservations or to pre-order takeout. They also have limited (new!) patio dining, only on the weekends. 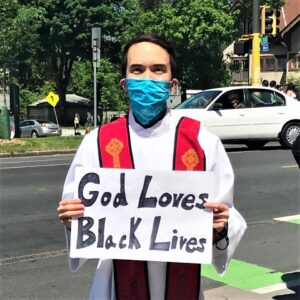 Churches in South Minneapolis have been stepping up to fulfill human needs in this stressful time, while being hyper-vigilant about COVID. There are lots of churches on or near Bloomington, but five in particular I want to highlight. At 1515 E. 23rd St., All Nations Indian Church is a Church of Christ denomination incorporating Native spiritual practices into Christian theology. They were very caught up with the rest of the Native American community in defending their spaces after Migizi (a Native youth services / communications organization) was burned down in late May. Now things are back to what passes as normal. They are not big on social media, but did learn to Zoom. A phone number is available on their Facebook page.
At the corner of 31st Street and 16th Avenue stands the “new” Walker Church building (now over seven years old). Walker Church too was just “Zooming it,” but since mid-June, a small congregation meets in the “backyard” for music and leading the celebration, while a majority of the attendees join in via Zoom or Facebook Live. Celebrations are also recorded. In the wake of the George Floyd unrest, the church building was a staging area for food and other provisions and for the street medic teams, as well as offering a “chillout” space in the meditation room. Throughout the COVID period, Tuesday evenings are still about food for the hungry, and Sisters Camelot has continued a food distribution earlier on Tuesday afternoons. Walker’s new pastor since late 2019, Rev. Katy Lee, lives on 10th Avenue across from the west side Powderhorn Sanctuary (still there at time of writing although it may not be by the time you read this) and has been very involved in neighborhood efforts there.
Another congregation—bigger and more youthful—is also based in Walker Church. New City Church has become a leader in movements such as local environmental and resilience activism and racial justice. Led by young “churchplanter” Rev. Tyler Sit and others, New City had been in negotiations with Walker Community about sharing the sanctuary and ownership responsibilities when COVID struck and moved both congregations online. Both churches have active websites and social media and weekly email newsletters if you’re interested in more.
Just east of Bloomington on East 42nd Street is Bethel Evangelical Lutheran Church. This church is very active in the community, hosting a food shelf, meeting spaces and Nokomis Healthy Seniors. They became a pop-up mutual aid site, along with nearby El Colegio School, during June and much of July. A bit farther south on Bloomington, at 45th Street, is Living Spirit. This is another aging congregation like Walker Church, but also like them, still very strong in spirit and activism. It’s a racially diverse congregation. They also adapted surprisingly well to Zoom services and are cautiously planning for a return to in-person community.
For your early August nature hit, check out one of Minneapolis’s newest parks—Edward Solomon at 1301 E. 58th St. Besides an archery field, Solomon Park has fields, hills, wetlands and a small pond where you might spot the neighborhood eagle.