A display of wares at
Capitol Guitars

The western origin point of Selby Avenue in St. Paul is only three blocks west of the river, but the avenue doesn’t start to get interesting until it crosses Fairview (going east) with a tricky-to-maneuver dogleg. It rambles on straightly eastward to Cathedral Hill and the verges of downtown St. Paul. In between it sort of alternates between blocks of residential buildings only, stretches of light industrial architecture, and venerable small business hubs with a traditional St. Paul look and feel.
Starting with grocery stores, there are two excellent ones on Selby Ave. In the business hub at Selby and Snelling you will find Whole Foods, a relative newcomer to St. Paul. It is the “anchor” of an upscale apartment building, the Vintage. The Vintage comprises three extra floors of modern industrial-looking dwelling space built atop a repurposed, high-ceilinged full block-size commercial brick building that used to house and belong to Liberty State Bank (now part of Associated Bank). The building was completed in 2015. The existing part of the building got a new facade and huge street-facing windows. Whole Foods has remained open more or less as normal in 2020. Whole Foods offers online ordering with either curbside pickup or delivery for Amazon Prime members. They offer a line of affordable necessities, many organic, under their label “365.”
The other major grocery outlet, older and in the older commercial hub of Selby-Dale, is a co-op. Mississippi Market is one of the survivors of the original “new wave” food cooperatives of the 1970s, albeit started at the very end of that era. Mississippi Market was founded in 1979 as a tiny, member-supported store in the Mac-Groveland neighborhood. Expansion and a couple of moves ensued before the cooperative decided, in 1997, to build a large new store of its own in the Selby-Dale neighborhood, a low-income neighborhood on the cusp of gentrification. The store was completed and opened in 1999, but the process of building it, along with other “growing pains,” almost destroyed the co-op. This article (tinyurl.com/CG2001MM) from Cooperative Grocer in 2001, tells the fascinating story. 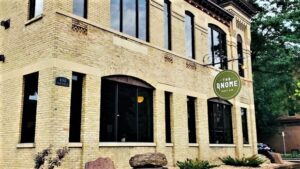 Today Mississippi Market’s oldest store, the location is now an outstanding success. The co-op offers online ordering and curbside pickup (at another branch). On Thursdays, seniors get a 5 percent discount.
An exhaustive list of the many small businesses, nonprofits and franchise outlets on Selby Avenue and its environs would be too large for this article, so in choosing which ones to focus on I have concentrated on the local, the green, the quirky, or the simply more affordable.
We’ll start with retail businesses, in which three categories predominate: clothing, household items (many recycled, upcycled or consignment) and musical instruments. Most of the retail stores in this area are open with extra distancing and hygiene measures. Those with low traffic are open almost as normal, while the more traditionally crowded are limiting the number of guests or using their back yards and/or an appointment system. All require masks to be worn, and a surprising number of small businesses are also selling masks.
Moving eastward from the corner of Fairview and Selby, we’ll start with a little cluster of antique stores. “The Mall of St. Paul” 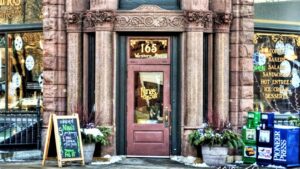 at 1817 Selby Ave. (not actually a mall) houses the Royal Crown Cola Antique Mall (also not a mall). Across the road, at 1818 and 1814 Selby respectively, are two more antique stores, Eastwood Gallery and Peter’s Oldies but Goodies. The Mall of St. Paul, Eastwood and Peter’s all have fairly up-to-date Facebook pages.
A couple of outliers are Eggplant Farm and Urban Supply at 1771 Selby (chickens and plants for home gardens), and Practical Goods (general thrift, clothing and much more), at 1759 Selby. Eggplant is now offering browsing and sales from its back patio, with a limit of three customers on the site at a time (socially distant waiting line), and Practical Goods is open somewhat as normal. Both stores also offer online product lists with ordering by phone or email and curbside pickup. Also of note is Strippers Furniture Restoration at 1698 Selby. Read their glowing reviews on Yelp. 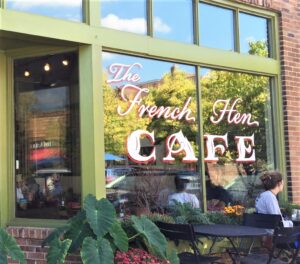 More antique, clothing and used goods options:
• Missouri Moose Antiques at 1750 Selby Ave.
• Play It Again Sports at 145 Snelling Ave. – longtime local resource for used equipment
• Spoils of Wear at 1566 Selby – very up to date Facebook page, values-informed fashion: fair trade, green or made in the USA
• Church Closet Boutique at 865 Selby Ave. – a whole lot of things, including clothes and linens
• Everyday People at 1599 Selby Ave. buying/selling used clothing and accessories
• Lula at 1587 Selby Ave. – specializing in clothing 25 years or older for men and women
In the music category, there is Cadenza Music, 149 Snelling Ave. They lease, sell and repair a large variety of string, woodwind, brass and percussion instruments. They also have lessons and sell sheet music. Then, I just discovered (online) the Jennifer Becker Violin Shop at 1161 Selby Ave. Becker makes violins by hand, and you can see videos of her working at her website jenniferbeckerviolins.org/. Capitol Guitars at 644 Selby Ave. sells new and used guitars (electric, acoustic and bass) as well as other instruments like mandolins and keyboards. Check their Facebook page. Selby Avenue is also home to the venerable Walker West Musical Academy, which we have covered in the past. They are still in business, mostly virtual classes and recitals.
You may be familiar with Selby Avenue primarily due to its Jazz Festival, a late-summer, early-fall staple event east of the river, in which Walker West Academy is very involved. This year, due to the 2020 Weirds of course, the Jazzfest, as it is known, is online, comprising four Saturday livestream events on the four Saturdays of September. If you’re reading this before September 26, that’s the last one and the only one you can catch live. The Facebook site of the Golden Thyme coffee shop has preserved the videos of some performances. Visit the Jazzfest site on Facebook for more information.
In the category of services, there is one bike shop on Selby—a nonprofit youth program that services bikes while teaching the 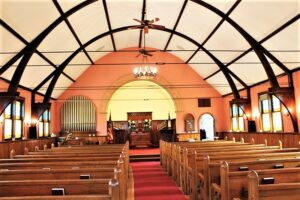 Interior of Virginia Street Church designed by Cass Gilbert in 1886

skill. Express Bike Shop at 1158 Selby Avenue also sells used bikes. Another nonprofit in the services category is the St. Paul YWCA, near downtown at 375 Selby Ave. Check their website for details of programming in the 2020 Weirds.
There are loads of salons, spas, massage therapists and barbers on Selby Avenue. Here is a list of the more accessible and affordable. Most are on Facebook and are open by appointment only.
• Rouge Urban Salon at 1743 Selby Ave. – traditional and unpretentious but modern
• Restorative Massage and Shiatsu Therapy at 1678 Selby Ave. – single person practice
• Merriam Park Nails at 1558 Selby Ave. – just nails, mani and pedi
• Salon Ori at 1166 Selby Ave. – all hair personalities welcome
• Omari Brow Studio at 1050 Selby Ave. – threading or waxing
• Grooming House Barber at 927 Selby Ave. – traditional barber
• Get Gorgeous Salon and Spa at 878 Selby Ave. – a nice, family-style salon: women, men, kids, simple cuts to braids and extensions
For eating and drinking places, Selby Avenue also has too many to list. So, the following list is a selection and more information is available on websites or via a phone call.
• Blue Door Pub at 1811 Selby Ave. – part of a small local chain, famous for the Blucy
• Augustine’s Bar and Bakery at 1668 Selby Ave. – non-contact takeout, patio dining (self-serve including beer & cocktails). Bite Squad order for delivery, masks for sale
• Taste of Thailand at 1671 Selby Ave. – takeout only; phone order from online menu
• Zait & Za’atar at 1626 Selby Ave. – Palestinian fast-food takeout featuring shawarma
• Rose Street Patisserie at 171 Snelling Ave. – “sister” to Patisserie 46, same great products
• Golden Thyme Coffee Shop at 934 Selby Ave. – a neighborhood institution
• J. Selby’s at 169 Victoria St. – vegan fast food, takeout only, does a lot of mutual aid
• New Louisiana Cafe at 613 Selby Ave. – American food, breakfast and lunch, delivery by UberEats
• French Hen Cafe + Moonflower Pizza at 518 Selby Ave. – cafe during the day, pizza takeout at night, alleyside delivery with online ordering
• The Gnome Craft Pub at 498 Selby Ave. – former Happy Gnome under new management, yummy food and a great beer list
• Bon Vie Cafe + A Piece of Cake Bakery at 485 Selby Ave. – small breakfast and lunch place with an inhouse bakery
• Nina’s Coffee Cafe at 165 Western Ave. N. – open every day 6:30 a.m. to 4 p.m. – very old world in appearance
• Moscow on the Hill at 371 Selby Ave. – authentic Russian, Ukrainian and Georgian cuisine
One of the easternmost establishments on Selby Avenue is a church, one that has often caught my attention when I cruised by it on the #21 bus (which no longer goes there). No, it’s not the Cathedral, it’s the Virginia Street Church, a Swedenborgian church, i.e., one that follows the Biblical exegesis and mystical knowledge of Emanuel Swedenborg (1688 – 1772, see Wikipedia for his whole story). It’s a beautiful old church and has a small park across the street, and is only a few blocks from the Cathedral on Cathedral Hill. This could be a good site for a quasi-nature walk on a fine day.