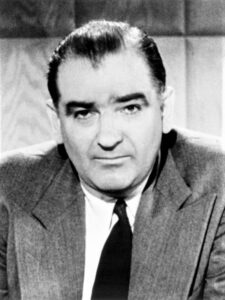 I was in my 20s during the McCarthy years—roughly the early ’50s. Communist hysteria. Traitors everywhere and a reckless and audacious national figure attacked such supreme patriots as George G. Marshall (of the Plan) and the architect of not just World War II victories, but World War I too. McCarthy was abetted by a sick duo—Roy Cohn and G. David Schine. What a scene of national agony.
I felt it keenly. Every second Sunday I’d drive in for dinner with my fiancee’s family. Her father was an ardent McCarthyite and just couldn’t take it. Our jousts were epic.
An impressionistic backdrop—in the ’30s the only folks loathing fascists were communists. If you were a Jew you’d be a leftie, at least until 1939 and the Nazi-Russian Pact. So, you joined groups, signed petitions, picketed, wrote tracts and made it into the FBI files. A lode for McCarthy. It mattered little that innocents were shattered, suicides occurred, blacklists abounded. Decency, truth and wisdom were suspended.
Into this petri dish swam our hero and his sick acolytes. America was shaken. Even Truman succumbed to the Red Menace. An object lesson was learned, whose instruction lasted until 2016.
Déjàvu all over again.
Mostly there were no real peeps. Writers—Dalton Trumbo, et al—were silenced. Hollywood was spooked. Harvard was muted. Marshall was too dignified. Eisenhower watched his mentor vilified and said nothing. The inaction was deafening.
My account here—as with practically all my musings—is impressionistic and reliant on what I know to be a flawed memory, but still …
I watched in silent—actually, occasionally strident—agony.
Then—in one delicious, televised moment—a New England lawyer turned to the senator (during a televised hearing) and, shocked, plaintively wailed, “Have you no decency, sir?” Welch was our hero and savior.
That was the moment.
McCarthy crashed. Oblivioned and died.
Edward R. Murrow also took McCarthy on heroically.
But the heroes were few and far between and the nation tottered and shook. Amazing how many sunshine patriots there are. And how fragile our values and freedoms.
Seventy years later here we are.
I think there are still heroes out there, but where? The toadies abound—pulled by the magnetic power of the limelight.
McCarthy had plenty of supporters—Wahoos and superpatriots. Why don’t we call them “deplorables”? When they get in the saddle and take the reins, watch out.
Do they exist today?
Are you kidding me?
The racists, rednecks, bikers, gun nuts, losers, draft dodgers, scammers, arrivistes, wannabes, star-fuckers and their ilk abound. About 30 to 40 percent of America, I’d guess. Ignorance is their mantle and hate their response. Unlike our fallen protectors, these guys are not “losers and suckers.” But you couldn’t call them winners and savants either.
Joe McCarthy would be right at home in a Trump rally. History repeats itself not as tragedy, but as farce.