Between hope and despair 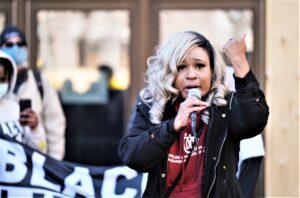 Founder of Families Supporting Families Against Police Violence, Toshira Garraway, displayed her arm to make a point about the color of her skin at a press conference held by a coalition of activist organizations outside the Hennepin County Government Center Feb. 25 ahead of the March 8 start to Derrick Chauvin’s trial. At the conference, speakers from Black Lives Matter MN, the NAACP and other organizations publicized their plans to protest on March 8. Jury selection for the trial of former Minneapolis police officer Derek Chauvin starts the day this paper comes out. All day on Monday, the community at George Floyd Square is hosting a Day of Prayers for Justice for George Floyd and Black Liberation. Photo by Casey Ek

On the morning of Jan. 6, I woke up to the news of the Democratic candidates winning the runoff election for the Senate seats in Georgia. I knew that this gave the Democrats too slim a majority to accomplish much and I knew that the Democrats were unlikely to actually accomplish all that they could, because … Democrats. But I chose to feel happy and hopeful for one day. After the year we’d had, my mental health needed the ability to take a day and just focus on a good thing happening. And then a violent mob attacked our nation’s Capitol.
Since that day I have struggled to find hope for the future. I was relieved when Biden was inaugurated with no further loss of life and I have been pleasantly surprised by some of the Biden administration’s early moves: canceling the Keystone XL Pipeline, Vice President Harris pressuring Senate Democrats who were breaking unity with the party’s policy stances such as direct relief checks, and pursuing reconciliation while calling out the Republicans for their obstruction during the Obama administration.
But Senate Republicans have cemented their opposition to our very structure of government by standing by Trump and his attempted coup. Biden and the Democrats have been in “control” for over a month now, that’s one more rent payment due, and we still haven’t seen the passage of a relief bill or direct checks to the millions of struggling Americans. Democrats like Manchin and Sinema stand firmly with the Republicans in making sure Americans will continue to suffer and that the Biden administration will accomplish as little as possible. Short of Trump destroying the Republican party with his own political party, this combined with numerous voter suppression laws being put forward across the country, seems like a surefire recipe for Republican wins in 2022 and 2024. The Republican party that just de facto declared themselves the party of fascism in America.
At the local level, as preparations are made for the trial of the men accused of murdering George Floyd, state law enforcement is stepping up threats against nonviolent protestors on the issue. The state leadership and law enforcement looked at the brutality caught on that video, saw that brutality broadcast around the world, the brutality that woke up the nation and the world to the deadly consequences of systemic racism, and they have dug in their heels with business as usual. They looked at the way the Minneapolis Police Department violently attacked peaceful protestors before the officers in question even faced charges and decided those demanding justice were the problem.
City leaders are no better. They have announced plans to reopen George Floyd Square to traffic after Chauvin’s trial. Nothing has been done to address police brutality. Nothing has been done to change our public safety infrastructure or how we fund it. The city and state plan to have an increased law enforcement presence in the city for the trial. It is likely Chauvin will be acquitted and the city is counting on aggressively suppressing the natural reaction to the continued injustice of our system.
This is an embarrassment to all of us. This is an embarrassment playing out on a national and international stage. This is the leadership of Minneapolis and Minnesota presenting themselves to the world as supporting war crimes like the use of tear gas against protestors, standing by white supremacy and structural racism by making no efforts to change policing, and proudly boasting its callous disregard for citizens who happen to be the “wrong” color. It is imperative that we stand up and let the world know that these actions do not represent us, or we are all complicit.
So far, I have discussed my despair at length, but I also have hope. Not much, but some. I find hope in the organizers and activists for social and racial justice. I find hope in the dropping COVID cases and rising availability of vaccines. At a local level I find hope in the campaign of Sheila Nezhad for mayor, especially given her work with MPD150. I am hopeful she will be a strong contender against Frey. I am trying to lean into these hopes, but I am also well aware of the potential roadblocks and often powerful opposition to the positive. So today I will order some garden seeds and think of spring and hope that, perhaps, I can bring some beauty to a small corner of the world.