Artifacts at the Somali Museum on Lake Street

I’m not sure but I think spring on Lake Street might be the first neighborhood spotlight piece to get a second COVID treatment. According to the sparse feedback I get, this formula works—for COVID, and it should work for the gradual emergence and recovery from it—so I’ll just continue. We’re going to consider comings and goings in some basic categories, plus at anchor hubs Midtown Exchange, which houses Midtown Global Market, and Mercado Central. Lake Street being what it is, there is a lot to cover, so it must be brief and you can use your own search prowess for contact details, hours, etc.

We’ll start with larger grocery stores and go east to west. Longfellow Market has survived well, despite having no online ordering or delivery contracts that I know of. At the corner of Lake and Minnehaha, there are two little shopping sites on the two northern corners and both have a grocery store. Both of them—a very small Aldi and a reasonable-sized but not 24-hour Cub—are open after taking significant damage in the uprising.
There are numerous convenience stores along Lake from I-35 to the river, too many to cover. I will only mention three. La Alborada is, like many of them in this area, a mainly Mexicana and Latina-style grocery. The other ethnic specialty along this stretch of Lake is East African, both in the restaurants and retail and grocery.
The other two small stores are in each of the anchor hubs. In Mercado Central you will find Isabella’s Grocery Store. Also in this hub are Valerie’s Carniceria (a butcher shop / deli) and Panaderia el Mexicano, a bakery. In the Midtown Global Market (MGM) there is the Produce Exchange, which has a lot more besides produce. It’s a petite and complete all-purpose food purveyor and you can even order online for delivery through mercato.com. 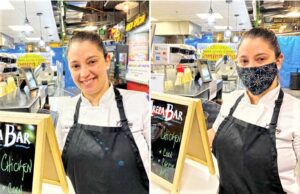 In terms of pharmacies, two very good ones both suffered arson or major damage in the uprising and were closed for repair. One is Seward Pharmacy, which caters especially to Somali and other African clientele. It is now fully open. The other is a Walgreen’s at 31st Avenue and Lake. They were operating out of a mobile unit in the parking lot for many months but are now open and back to normal.

In the world of retail storefronts, we’re all very glad that Ingebretsen’s got back to being open after significant damage. Ingebretsen’s, if you don’t know it, is a very old and venerable family-owned shop for gifts, kitchen linens, wool goods, arts and
crafts, books and foodstuffs imported from or employing traditions of Scandinavia. Another retail establishment we want to highlight is Frattalone’s Ace Hardware at 39th and Lake. It’s part of a franchise of hardware and garden stores and one of the very good ones.

Services is our broad catch-all category for private businesses providing everything from alternative health care to car repair, plus government services. In the building on Lake and Bloomington, Bucca Dental has been doing some good business. A lot of people (including yours truly) have somewhat neglected their dental health during the pandemic, so now might be a time (or soon) to check them out.
The East Lake Library was also at that epicenter of destruction in May and June and was one of the last Hennepin County Libraries to re-open, apart from a few that are still closed. It is now open in “grab and go” mode, to check out holds, to accept returns, and for limited computer use. And have you heard? Hennepin County libraries have followed the lead of many other literacy-loving metros and gone fine-free. So don’t be afraid to take back books you’ve had for more than a year.

There are two mutual aid projects we’re shining the light of spring upon. The first is technically a nonprofit, but its work is more in the mutual aid category, and that is Lift Garage. The Lift Garage’s mission is to “offer people a vehicle out of poverty by
providing low-cost quality car repair, connecting with community partners to strengthen the support network, and linking 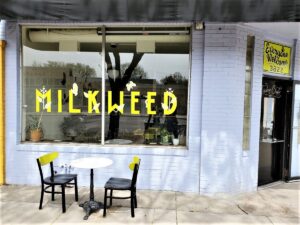 customers to needed resources.” Their services are available to car owners or prospective car owners at 150% of federal poverty guidelines or below. For the duration of COVID, only their lobby is closed, and the garage maintains safety protocols.
The other is a true mutual aid provider and participant in the gift or sharing economy. This is the Phillips Free Store. During the summer of 2020, they were located in the Phillips neighborhood, at an outdoor site, but in the late fall they moved into the Walker Church building on 31st Street. To find out more about the Phillips Free Store and other mutual aid projects across the metro, go to twin-cities-mutual-aid.org/.

Faith communities and other nonprofits

Mutual aid segues nicely into faith communities and other nonprofits. The first one is Walker Community UMC (United Methodist Church). The UMC is the very antithesis of united right now, to be honest. Walker Church is playing a waiting game on that, and also working on its eventual relationship between its beloved community, the ever-changing panoply of awesome tenants, and its official congregation.
One of the other communities is both one of those partner-tenants in the Walker building, and also another UMC: New City,

which has been in the building for a few years now. Both congregations are only meeting virtually, or outside. The food mission in that building remains primary. Walker never missed a beat on the Tuesday meals (takeout since last March) and grocery distro. And, now, a “politically-inclined” mutual-aid kitchen that emerged from the uprising is also using the space. New City has a larger, younger, even queerer and even more environmentally-committed membership and provides huge good energy. 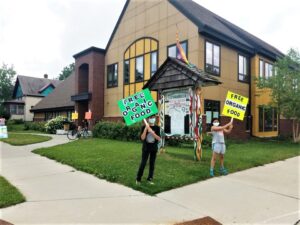 The third church is somewhat more traditional but far from stodgy, and very working-class and immigrant-friendly. This is the St. Paul’s ELCA Church at 15th Avenue and 28th Street. Besides having a sizable, young, mostly Spanish-speaking congregation, St. Paul’s has hosted a community program and an arts program for years, and has often collaborated with its neighbor In the Heart of the Beast Puppet and Mask Theatre.
The last one is another young, non-traditional church but independent of denominational baggage; it’s the “church with the really big door,” Spirit Garage. As its website explains, “Before the pandemic and other events in the neighborhood, we were gathering at the Hook & Ladder Theater and other locations in South Minneapolis… These days, we gather mostly online for worship, book clubs, anti-racism work, coffee breaks, and other times to connect.”
As you may know, the Migizi office used to be next to Gandhi Mahal and was completely destroyed in the uprising. They provide a youth mentorship service in communications and media for Native American youth. They are currently at 1845 East Lake. Longfellow-Seward Healthy Seniors also lost their building—a U.S. Bank building on Lake Street—the same night. Still very much in business, they are currently in the U.S. Bank building on Minnehaha. One nonprofit that has had relatively little disruption during the past year is the Somali Museum. If you’re not familiar with them, check the About page on their website to learn of their purpose and history.

This market had some damage during the uprising but was probably harder hit by the pandemic. Still, it’s standing strong. The current list of eateries includes La Loma, La Perla, La Reyna de los Jugos, Maria’s Restaurante, Rincon Salvadoreño and The 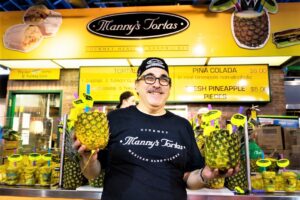 Best Tacos del Sol. There are also numerous retail outlets and services in the mercado.

Midtown Global Market is once again permitting indoor dining in a few areas of the market, and requiring masks when not in those socially-distanced eating and drinking zones. The Eastlake Craft Brewing site is not an indoor eating zone, but in front of it, close to Manny’s Tortas, is the largest one, called the Dugout.
Andy’s Garage has moved and no longer has a dedicated dining area. The newcomers include one already open—Arepa Bar, in the old Mama D’s space, and one “Coming soon” to the old Holy Land space, Oasis Middle Eastern Foods.
There have been a few more departures, and a few more new businesses, at MGM since we last covered them. Infused Life has moved on to a bigger space; Jakeeno’s closed their MGM Trattoria; and the Backyard Health Initiative no longer uses their market spot. Leila’s Brow Art has expanded and moved to the front of the market.

Eating out outside of MGM

Outside of the market, the Hi-Lo Diner, the Longfellow Grill, Himalayan and Merlins Rest, as well as three coffee shops with some food items—Milkweed, Dogwood and Dunn Bros.—are all open for business, including various mixes of patio dining, indoor dining with reservations, takeout and delivery.