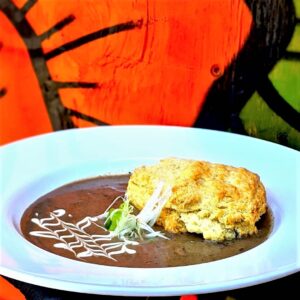 Reverie biscuits and gravy on the sidewalk patio

What I did during thepandemic
I didn’t fare badly at all. I never ran very low on food, and didn’t even run out of toilet paper, no thanks to my goofy fellow Americans. Delivery services were a lifeline to me, as amped-up food shelves and pop-up mutual aid sites were a lifeline to less fortunate neighbors. My church, Walker UMC in the Powderhorn neighborhood, barely missed a beat, pivoting smooth-ishly to takeout meals in late March, opening their doors to protestors, medics, food justice activists for the houseless, and more during the tense days of the uprising, and settling down to house a bunch of new radical organizations for the long haul. Meanwhile, I barely went out, did a lot of Zooming, and coordinated the Southside Pride “What’s Open?” lists of recent memory. 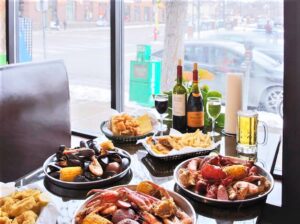 I wish I could say I discovered a bunch of new foods or food vendors via the delivery services, but the truth is, I am very partial to Pizza Luce, and decidedly a creature of habit. Still, I discovered a few new loves, listed below. I also got frequent supermarket/co-op sushi and a few other prepared meals. I leaned on Imperfect Foods, upping my subscription from every other week to weekly. I discovered Thrive Market, a market box delivery service. I did a “project” of buying meal kits from a number of companies, then wrote a blog comparing them. I did something similar with market boxes.

New foods I learned to love and where I got them
Beyond Burger on pizzas in place of any meat — PizzaLuce uses Beyond as a topping, and I am insanely happy about that.
Barramundi — I had heard of this but never had it until a meal kit I was trying featured it.
Basque-style fish stew — chunks of a single light white fish such as sole, cooked just three minutes at the end, in a rich tomato broth with smoked paprika, leek, and white wine, also from a meal kit.
Kimchi Beyond Brat — I invented this, inspired by the Kimchi Hotdog at Tiny Diner (which just suddenly reopened without warning a couple of weeks ago). Organic wholewheat bun, pan-fried Beyond Brat (Tofurkey Brat works too, not quite as yum, but cheaper), vegan mayo, lots of YouBetcha medium kimchi.
SkinnyDipped lemon-coated roasted almonds— bought from a meal kit, also available in some local stores.
Crio Bru roasted and brewed cacao— I got an ad for this repeatedly in games on my phone and gave it a shot.
Imperfect Foods upcycled oat milk cookies— a pound of tiny, delicate cookies, getting their taste and texture from the use of the fiber left over from making oat milk.

Restaurant, cafe, brewery, and distillery closings and disasters
Twin Cities Eater (an excellent resource for dining, you can subscribe to their emails for free) had a piece in December 2020 summarizing all the Twin Cities restaurants and such that closed over the whole year. See twincities.eater.com/closings for this and more recent closings news.
Last week, Sisters Sludge, my local coffee shop, had to close down temporarily and very suddenly when a huge chunk of the corner roof and side of their building fell off! It also collapsed the tent-shelters on their sidewalk seating. Fortunately, no one was injured.

Recent restaurant cafe, brewery and distillery openings and reopenings
Memorial Day weekend I tried to visit two openings but was discouraged by seeing long queues of people waiting to be served. (I can’t bear waiting in line; must be why I don’t like potlucks either, although I like the concept. But long lines are a good sign for the opening!) One had actually opened the week before, on May 21, and it had the longest lines — over two blocks long. This was Herbie Butcher’s Fried Chicken in the old Elbow Room space on 48th Street just west of Chicago Avenue. They are takeout only, very of-the-moment. In case the name Herbie Butcher doesn’t ring a bell, this is vegan fried chicken and vegan everything else that goes with fried chicken. It’s the newest enterprise by the brother-sister team behind the wildly popular Herbivorous Butcher vegan deli in northeast Minneapolis. The other is a juice bar on Minnehaha at 40th street. Called Dripping Root, it was conceived and is owned by a woman of color and features all-raw vegan juices and smoothies.
A very recent reopening is Hector Ruiz’s flagship restaurant Ena at 46th Street and Grand Avenue. I have not been there yet, although I’ve had a couple of meals at his other places. Tattersall Distillery has reopened their patio for service. Also, some time ago Surly Brewing announced they were reopening their massive patio.
But I don’t think you should patronize Surly. They had a unionizing drive in 2020, and the management was despicable. The election was lost by only one vote. And shortly before the vote, they closed their taproom and patio and laid off all the staff, which probably contributed to the difficulties in voting, which defeated the union. (This is why we need the PRO Act!) Read more about the Surly conflicts here — jacobinmag.com/2020/09/union-busting-minneapolis-surly-brewing-company and here — minnesota.cbslocal.com/2020/10/07/effort-to-unionize-surly-brewing-company-workers-fails/.
If you want an excellent union and co-op brew instead of Surly (which I was never that impressed by anyway) may I suggest Fair State Brewing Cooperative? You can also get it to go with orders at several Pizza Luce locations.
For new openings, there is also a brewery taproom — Arbeiter Brewing, a survivor of the civil unrest last May and June on Minnehaha Avenue as the sideshow to the burning of the 3rd Precinct police station. Arbeiter is right next to Moon Palace Books.
In the Midtown Global Market, the newest opening is Soul to Soul Smokehouse, a barbecue and soul food takeout (although food hall-style dining options in the market are available). And at the Mall of America (not my usual beat, but hey) an outlet of a famous East Coast chain —Mason’s Famous Lobster Rolls — has opened.

Mini-Review — Reverie Cafe + Bar
I was one of the Kickstarter patrons of Reverie before they opened, and I still have credit left from my “perq.” I need to get there again soon. I loved Reverie in its old space on Franklin Avenue, I loved it as a food truck, and I love it in its new location at 35th and Bloomington Avenue. I hope they will open indoor dining soon, because I prefer that greatly to either taking stuff home or sidewalk dining (although theirs is pretty decent, comfortable and sheltered from traffic and sun.)
Reverie is all vegan, or plant-based as we say now. They make their own secret veggie burger mix, and also make cashew milk and other ingredients from scratch for their cremas, dips, and other dairy alternatives. They have a full wine list, a full beer and cider list, and a full coffee drink service, with options including soy, oat, and almond, as well as their own “house milk.” They have a house-made cookie, and/or vegan ice cream from Crepe and Spoon for those with a sweet tooth.
Currently they are open for takeout only, but they did at some point add weekend brunch service. I had brunch once in their old space and it was great. I have had and strongly recommend the Rev Burger, with rooibos tomato jam and kimchi, the potato wedges, the cauliflower taco, the nacho meal kit, and the mac and cheese with shiitake bacon.

Mini-Review — Cajun Boiling
I feel like such a traitor doing this. Not only is Cajun Boiling not a vegan restaurant, but it’s in the old space at Franklin and Nicollet that Reverie was kicked out of several years back by their landlord! Oh, why can’t we all just get along? Oh, yeah, I know why …
But anyway, I recently tried Cajun Boiling, delivered via Bite Squad. I had a craving for oysters. Oysters are not something you boil, although they do sell them steamed, but I had the “fried basket” option. I got sweet potato fries for my side order. It was all well-prepared, very fresh, and delivered efficiently by the delivery service. I think the boiled Cajun combo would be a better test of their skills, and the seafood gumbo would be a better test of their Cajun authenticity. I may order again. A pound of boiled crawfish with corn on the cob and boiled potatoes for only $14.99 sounds enticing. (They also have beignets for dessert!)