Agape receives contribution for peacemaking work in the community 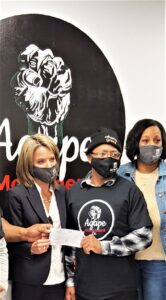 Kelly Neumann, principal/owner of Neumann Law Group based in Michigan, hands a check to Reggie Ferguson of Agape, a nonprofit based at George Floyd Square. The donation was going to be $5000 but then escalated to $7500. (This is one time that escalation is a good thing.)

Kelly Neumann, principal/owner of Neumann Law Group based in Michigan, came to Minneapolis on April 15 to meet with Agape because she felt that giving a donation remotely didn’t mean as much.
In her remarks to the group, she said the time has come when “we can’t be idle anymore, when we have to stand up.” She hopes her law firm can inspire other large, financially successful entities to appreciate community organizations such as Agape and help to keep them up and running. In addition, she expressed a desire to educate herself about racism in this culture.
Following her statements, a discussion at the Agape office building offered her, and the other white allies present, a small beginning.
We were there for maybe several hours. I learned that in order to build healthy communities, where young men don’t need to engage in violence, Agape provides education and support.
In African and Native cultures there is no such thing as a teenager. Boys go from boys to men. Boys are mentored by older men, who are called healers. A program called Rite of Passage is currently being developed.
Steve Floyd, a co-founder of the Agape Movement back in the ’80s, talked about how important it is for boys, and young men, to leave the four- to eight-block area where they grew up. He’s taken many of them on life-changing trips. For example, in Senegal they can see “real poverty where there’s community.” In other words, they can see that poverty doesn’t automatically cause the breakdown of community—not that he advocates poverty.
Also, the trauma of day-to-day life is something Agape can help with. Reggie Ferguson, one of the founders of Agape at 38th Street, said, “People see us, hear about us. When they come, we set ’em down and talk to ’em.” Young men and boys are encouraged to share feelings as a way to deal with trauma. One young man vividly described the day George Floyd was killed, his fear that the victim was literally his brother, his relief that it wasn’t literally his brother and then the overwhelming sorrow and anger and knowledge that George Floyd was indeed, a brother.
During the discussion a young Black man explained that he and his wife are highly educated, make good money, live in a suburb and are doing well. Yet, because he tries to be open to the experiences of others, he is engaged in an ongoing, often painful, conversation with a white neighbor who is overtly racist in his views. The young man talked for quite a long time about this difficult relationship and then apologized for monopolizing the conversation.
Bridgette Stewart, who is one of a handful of young Black women engaged with Agape, responded that this is precisely what Agape does: It provides a safe place to talk about feelings. She said that every experience of racism is a new trauma. It “rips off another band-aid,” and that’s why it’s important to process feelings by talking about them.
At the end, Steve Floyd recommended a 30-minute Netflix film called “Two Distant Strangers,” which portrays the fear young Black men in this country live with. Despite the centuries of fear, Agape nevertheless (along with other similar groups like Freedom Fighters, Touch Outreach, Push for Peace) patrols the streets, unarmed, deescalating potentially violent situations that arise.
The money from Neumann Law Group will be used for equipment needed on patrols, such as walkie talkies, rain jackets and T-shirts, as well as miscellaneous needs, from printer paper to repairs in the office building.
Early on Thursday morning, June 3, city workers came to George Floyd Square and began removing the concrete barriers that closed off the square to through traffic. Agape, who had originally put up the first barriers last May, was the group that had approached the mayor and the police chief about opening up the square. Agape had surveyed the neighborhood and found that about 90 percent of the neighbors wanted it open. They were also sensitive to the struggling businesses, and they were opposed to people up to no good who took advantage of the lack of police presence. Agape helped choose the design of the memorial that would remain in place, and then, on Thursday, were there to make sure the transition occurred without violence. Agape continues to be committed to the healing space created at George Floyd Square.