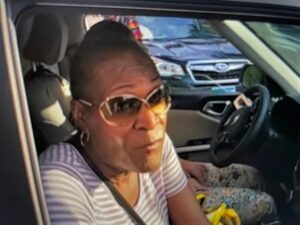 On Sunday, June 27, Andrea Jenkins, the Black trans Minneapolis City Council Member, had her car surrounded by about a dozen protesters as she was trying to leave a Pride event in Loring Park. The ward she represents includes three of the four corners of George Floyd Square at 38th and Chicago. The protesters wanted her to sign and agree to their demand to “leave George Floyd Square alone!” After being held hostage for almost 90 minutes, Jenkins signed the demand and the protesters said she was free to leave.
The action by the protesters was almost universally condemned by the media.
Donald Hooker Jr. was probably the loudest of the protesters and he wrote on his Facebook page: 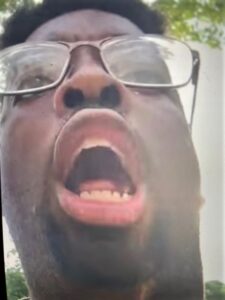 “Andrea Jenkins is nothing but a playground bully. She starts off by bullying me and when I stand up for myself she tells the teacher I’m the bully. She is the first one that blew up in my face while we were having a civil discussion. And when someone jumped in between us she went around them to jump in my face again. So she could scream that on the literal day of Pride how she was going to call the cops on me if we had a peaceful protest at her house cause of her lack of action in the last year. The irony that a Black Trans woman said she would call the cops on a gay Black man on the day that Black Trans Woman fought the cops is mind-blowing to me. While she knows that she has done nothing in the last year but give them more money. Which has resulted in the death of Dolal Idd, Daunte Wright, Winston Smith.
“Now she is saying she was traumatized for 90 minutes.”
Jenkins wrote to her constituents:
“Last Sunday afternoon while attending a Pride event in Loring Park, something I’ve done on the last weekend in June for the past 20-plus years, I was verbally attacked, berated and held against my will by a group of angry protesters.
“I am a public servant. I represent 31,000 people that live in Ward 8. We need answers related to the deaths of Dolal Idd, Daunte Wright and Winston Smith. I have always believed in open dialogue where people can talk and be respectful of differences. I refuse, however, to be bullied and held hostage to somehow accomplish that. Every citizen of this City has a right to bring forward their concerns, but no citizen has the right to detain and coerce anyone to do anything, including elected officials.”
George Floyd Square is now open. The Fist remains in the center of the intersection. Traffic has to slow down to go around it—a respectful genuflection.
Progressive activists are frustrated with Andrea Jenkins and Council President Lisa Bender and Mayor Jacob Frey and Chief of Police Arradondo. They talk, talk, talk about racism and police brutality, yet they won’t hold Lucas Peterson responsible for the murder of Terrance Franklin, even though the city paid out over a million dollars in the settlement to Franklin’s heirs rather than refute the plaintiff’s argument that Peterson murdered Franklin in cold blood. They won’t hold Officers Schwarze and Ringgenberg accountable for obvious breaches of protocol in their killing of Jamar Clark. They won’t hold public hearings to establish whether it was necessary to shoot Thurman Blevins in the back because he was acting drunk and disorderly. They won’t hold hearings to establish correct protocol for dealing with depressed people threatening suicide, so their silence becomes assent to the killing of Travis Jordan by the Minneapolis police.
Instead of actually dealing with these instances of the MPD killing young Black men, Andrea Jenkins and the rest of them talk, talk, talk about how serious the problem is. Jenkins concludes her letter to constituents:
“I am proud of our work at the City and in leading the Strategic Racial Equity Action Plan, declaring racism a public health crisis and spearheading the formation of a Truth and Reconciliation workgroup which presented its recommendations for a full on Truth and Reconciliation Commission to the City Council this past week. Through this work, we will redress the original, undeniable harms against American Indians and Black/African descendants who still bear the impacts of genocide, theft of land, labor, culture and personhood which props up the foundation of this country. I am proud that we adopted Juneteenth as a holiday this year at the City of Minneapolis, in recognition of enslaved Black/African descendants who were denied their freedom some two years after the presidential issuance of the Emancipation Proclamation had declared them free. I recognize this is not enough. I remain steadfast in my commitment to justice and racial equity and will continue to sit down with activists, advocates and protesters to understand and work toward shared policy change demands and recommendations.”
Rather than set up commissions to talk this problem to death, maybe it would be more useful and more productive for Jenkins to hold hearings on the actual killings of young Black men by the MPD and begin to hold those particular MPD officers accountable.