The foolish public servant who wants to do good 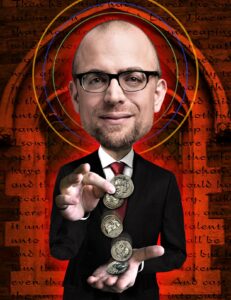 When I was a small boy attending Mass at St. Helena’s Church, I remember a sermon by my favorite priest, Father Don Schnitzius. The way Father Don told the story of The Ten Talents was slightly different from Matthew, Chapter 25, but the message was essentially the same. A man has to go on a journey and he entrusts each of his three stewards with ten talents of silver. The first steward invests the talents and makes a profit of ten more. The second invests the talents and loses them. The third buries his talents. When the man returns he asks his stewards for an accounting. When they tell him what happened, he congratulates the first steward and tells him to take the twenty talents and invest them. When the third steward tells the man he buried the talents so he wouldn’t lose them, the man takes the talents away from him and casts him out where there is wailing and gnashing of teeth. When the second steward tells the man he invested the talents but lost them, the man says it is good he tried and he gives the steward the ten talents that the third steward had buried.
I can’t help but think of that parable when I see the City Council wrestle with their responsibility to protect and serve the public. And none seem as earnest and serious about their task as Jeremy Schroeder.
Jeremy Schroeder wouldn’t vote to increase the Minneapolis Police Department budget by another $500,000 until he knew how the money would be spent. He didn’t think it was his job to give any department a blank check. He and Council Members Phillipe Cunningham and Steve Fletcher wrote a charter amendment to transform the MPD. Just last week he withdrew his charter amendment in favor of the similar one proposed by
Yes4Minneapolis.
No one can doubt Jeremy Schroeder means well.

Here is the proposed charter amendment:

“Department of Public Safety
Shall the Minneapolis City Charter be amended to remove the Police Department and to create a Department of Public Safety that employs a comprehensive public health approach, and which would include licensed peace officers if necessary, to fulfill its responsibilities for public safety, with the general nature of the amendments being briefly indicated in the explanatory note below, which is made a part of this ballot?
Yes _______
No _______
Explanatory Note: This amendment would create a new Department of Public Safety, which would:
(1) Combine public safety functions of the City of Minneapolis into a comprehensive public health approach to safety, with the specific public safety functions to be determined.
(2) Include licensed peace officers (police officers) if necessary to fulfill the responsibilities of the Department of Public Safety.
(3) Be led by a Commissioner. The appointment process for the Commissioner would include a Mayor nomination and a City Council appointment.
This amendment would also do the following:
(1) Remove from the Charter a Police Department that is led by a Police Chief.
(2) Remove the City Council requirement to fund a police force of at least 1.7 employees per 1,000 residents.
(3) Remove City Council authorization to impose additional taxation on taxable property in the City of Minneapolis of up to 0.3 percent of its value annually to fund the compensation of employees of the police force.”

Yes, it is important to recognize that many of the threats to public order are the result of crises in public health: too much alcohol or drugs, too little money, too few options and too much mental health trauma. It makes sense to transfer many of these public health problems to professionals trained to deal with them, rather than dumping them on the police. The police are a hammer in the toolbox, but not every public problem is a nail.
But the great problem with the proposed Charter Amendment is that it creates another layer of bureaucracy that further obscures accountability. It will be even more difficult to hold individual officers responsible for their actions.
Under the present system the chief of police is responsible for the discipline of his/her officers, and the mayor is responsible for the performance of the chief.
The chief and the mayor did nothing to hold Officer Lucas Peterson accountable for the murder of Terrance Franklin. Mayor Frey and Council President Lisa Bender said everyone had learned a very serious lesson from the million-dollar judgment against the city on behalf of the heirs of Terrance Franklin. The lesson white racists in the MPD learned was that they could get away with the murder of Black men, and that set up the murder of George Floyd.
And Chief Arradondo spends his energy trying to get along with the Police Federation, rather than understanding it is an adversarial relationship. In 2006 the FBI warned that white nationalists were infiltrating police departments nationwide. Bob Kroll, twice elected president of the union, was also the leader of City Heat, a motorcycle gang made up of metro police officers who wore Nazi war medals and flew Confederate flags. Tony Bouza, former chief of the MPD from 1980 to 1989, said you don’t try to get along with them, you rule them with an iron hand. While he was chief there were no complaints of police brutality. Cops no longer stopped cars because the driver was Black. Any time they stopped a car they had to write a report and explain why. He doubled patrols by instituting single-officer squad cars. Cops worked five days a week, eight hours a day, rather than the ten-hour, four-day work week of today.
There’s nothing wrong with the current structure of the MPD. What’s wrong is the people running it don’t want to make it work.
Schroeder and other progressives on the City Council want to throw the baby out with the bathwater. They want to tear up the MPD and start all over again from zero. They have to be given credit for realizing there is a problem, and they should be applauded for their courage and determination to do something to solve the problem. But why haven’t they simply tried to make the current system work? Why haven’t they asked the chief in public hearings whether he has disciplined Officer Lucas Peterson for the murder of Terrance Franklin? Why haven’t they asked the chief whether Officers Schwarze and Ringgenberg observed proper protocol in their killing of Jamar Clark? Why haven’t they asked the chief if the officers who killed Thurman Blevins acted according to protocol? Why haven’t they asked the chief if the MPD has sought help from mental health professionals in confronting suicides to avoid further killings of troubled victims like Travis Jordan?
Why haven’t they tried to make the present system work, rather than tearing it down and starting over?
They are like the stewards who saw an opportunity and took it and fell short in their efforts.
It will be up to the voters in November to determine whether they should be entrusted with another ten talents for another four years.