The struggle for rent control

BY GINGER JENTZEN AND JOE HESLA 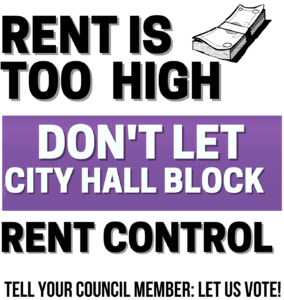 The Minneapolis City Council is the ultimate decider on whether Minneapolis gets to vote on a path for rent control in the fall of 2021.
Minneapolis is a majority renter city, and the rents have never been higher. According to Rent Café, in April, the average one-bedroom apartment in Minneapolis went for over $1500 a month. And people feel that something has to be done against out-of-control rents, to keep the city a place where people can afford to stay.
Minneapolis United for Rent Control (MURC), a coalition of faith, labor and community groups fighting for strong rent control, has been warning for months: big developers and real estate lobbyists are working overtime behind the scenes to pressure the City Council to back away from their two proposed charter amendments laying out two paths for rent control. Back in February, the City Council passed both proposals – with a veto-proof majority – on to the Charter Commission for review, although ultimately it’s the Council’s decision as to what goes on the November 2021 ballot to voters. The Council will vote at their late July or August 6 meeting whether to move forward one, both, or neither of these proposals to clear a path for rent control in Minneapolis.
One proposal puts the decision into the hands of City Hall. One makes possible a renter-led petition. On Wednesday, July 7, the Minneapolis Charter Commission undemocratically rejected the renter-led option, effectively attempting to block the clearest path to strong rent control. Organizers with MURC point out that the Minneapolis City Council is not bound or obligated to follow the recommendation of the un-elected Charter Commission.

On Saturday, July 10, Minneapolis United for Rent Control organized a postering and door-knocking blitz to spread the word on what it will take to overcome opposition in City Hall. The day began with a brief rally co-hosted by the Cedar-Riverside Community Council and included speeches from Bishop Howell with Shiloh Temple International Ministries, Alicia Smith from the Corcoran Neighborhood Organization, and Chris Smith from the Minnesota Association of Professional Employees.
While the Charter Commission has no formal legislative power, they can create the political cover for the City Council to go back on their vote from earlier this year. For example, Ward 6 Council Member Jamal Osman now says “I have reservations” about the renter-led pathway to passing strong rent control (https://twitter.com/JamalOsmanMN/status/1401242525772304391), even though Osman supported that pathway earlier this year (https://twitter.com/mpls4RC/status/1365380597154082816).
Mayor Jacob Frey told the Star Tribune that he doesn’t support the renter-led option, indicating that the proposal will face a mayoral veto if it receives fewer than nine votes from the council. “Mayor Frey says that he doesn’t trust working people in Minneapolis to address the housing crisis, clearly doing the bidding of the big developers and corporate landlords who have been cashing in on Minneapolis’ housing crisis,” said Ginger Jentzen, a member of Socialist Alternative MN and an organizer with Minneapolis United for Rent Control. “With the disproportionate influence of corporate landlords in the back rooms of city hall, it’s clear that we need a renter-led option. Minneapolis United for Rent Control is building the multiracial movement of renters, united with homeowners, all across the city to win the strongest possible rent control.”

Don’t Believe the Landlord Lobby
A recent study by the Center for Urban and Regional Affairs (CURA) confirmed what renters have been saying for years: a strong rent control in Minneapolis would be a hugely stabilizing tool for working and middle-class renters and homeowners. In fact, the study found that if Minneapolis had enacted a rent control which capped any rent increases to no more than 3% in any given year, comprehensively applied to all units in the city, this would have cut into the heart of some of the city’s dramatic racial inequities in housing. Additionally, the CURA study found that if Minneapolis had implemented a rent control policy in 2009 similar to what MURC is fighting for (capping rent increases at no more than 3%, universally applied, covering all units, not individual renters), investors still would have made a profit.
When renters and working people fight for rent control, corporate landlords and the real estate lobby threaten to leave the city and scaremonger that any regulation will make their business unprofitable. Rent control in itself is a powerful tool to keep units affordable for the long term, if used in an effective way. Contrary to myths pushed by the landlord lobby, rent control in New York City and San Francisco – or any other city that has had it – has been a veritable lifeline for tenants who would have been completely priced out of the city. However, over decades, the landlord lobby and big developers have succeeded in eroding these rent control policies. The claim that rent control reduces the quality and quantity of available housing is a myth perpetuated by the real estate lobby. Multiple research studies have stated there is no evidence that cities with rent control have seen a decrease in development.
Qannani Omar, an organizer with MURC and the Harrison Neighborhood Association, said, “We can’t let City Council walk back its support for a renter-led pathway to passing a strong rent control policy, which ties rents to cost of living, applies to every unit, and is free from developer-friendly loopholes like ‘vacancy decontrol,’ which means rent control expires when the renter moves out. These are the types of corporate loopholes fought for by the landlord lobby in the back rooms of City Hall. Without the renter-led option, working people, Black, and immigrant renters in Minneapolis have no guarantee that we’ll ever see strong rent control.”
Minneapolis United for Rent Control coalition partners include Harrison Neighborhood Association, Socialist Alternative, Inqulinxs Unidxs por Justicia, Centro de Trabajadores Unidos en Lucha (CTUL), the Minnesota Association of Professional Employees (MAPE), Minneapolis Federation of Teachers, the Minnesota Nurses Associations (MNA), Unite HERE, the Restaurant Opportunity Center, Black Visions, Reclaim the Block, Corcoran Neighborhood Organization, Twin Cities Democratic Socialists of America, and numerous faith based organizations, led by Shiloh Temple International Ministries.