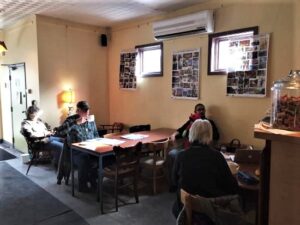 Dining rooms reopened and indoor café returns
The Seward branch of Pizza Lucé has opened its dining room. Quite a few other Lucés have been open for indoor and patio dining for a while now. But this one doesn’t have a patio, so that may have been why it took a while.
The May Day Cafe is open for indoor dining as of July 30! I am craving their almond croissants, the second best I ever had, and I have had them in London, Paris and Vienna, so that’s a pretty high bar. The May Day Cafe, near Powderhorn Park, has been open for takeout-only for some months. They closed down for much of July for a “reset.” Prominent local artist-photographer Gayla Ellis will once more have photocards on sale there, and also a photo poster exhibit. 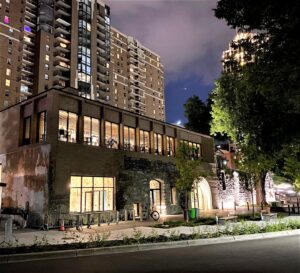 Openings
I saw that one of my Facebook friends had a meal at Owamni! It was not open to the general public at that time, but they recently had an invitation-only soft opening/preview for select backers. However, now Owamni is open. You need to make reservations. I am doing it right now. Here is the coverage by the StarTribune from Thursday, July 22:
“Sean Sherman and Dana Thompson of The Sioux Chef have been waiting a long time for this moment. ‘We signed on to this project way back in 2016 and it’s taken quite a few years building to this point where we’re actually open to the public,’ said Sherman, CEO and founder of The Sioux Chef. Their Indigenous restaurant ‘Owamni by The Sioux Chef’ opened Monday [July 19] in the new Water Works Pavilion building at Mill Ruins Park in Minneapolis.”
The opening itself is kind of old news now, but since I
haven’t managed a visit, I’ll say that another friend of mine went to Soul to Soul Smokehouse in the old Taco Cat space of Midtown Global Market and gave it a rave review, with particular praise for the grilled corn on the cob side. I think this is still the newest eating spot in MGM, but I could be wrong. I tried to visit and check it out but when I went to MGM at lunch time it was closed. So I had a Manny’s Torta instead.
From the Minneapolis/St. Paul Business Journal, we learned of a new coffee shop in downtown. St. Paul’s Vitality Roasting has opened a skyway cafe in Minneapolis, in the Six Quebec building.

Hospitality industry news and food politics
I came across this piece in “The Week,” a weekly news aggregation magazine. Since contactless payment systems, delivery methods, ordering methods and even virtual menus were deemed vital to restaurant recovery from the pandemic, I thought it was germane to share it here. Since we now know physical contact isn’t a major vector of spread for COVID, is there any reason to keep these awkward and unloved new substitutes for service? (theweek.com/business/1002085/most-contactless-service-is-awful-you-can-tell-because-the-rich-dont-do-it)
A joint study by the Guardian U.K. newspaper and the global nonprofit Food and Water Watch attempts to discover and reveal just how monopolistic the U.S. grocery market (and by extension, restaurants, since most of them get their ingredients from the same wholesale sources) is. (www.theguardian.com/environment/ng-interactive/2021/jul/14/food-monopoly-meals-profits-data-investigation) How can you avoid supporting and perpetuating this? In descending order of helpfulness: grow, cook, freeze, can and pickle your own; buy directly from farmers or via a CSA subscription; buy from farmers’ markets; seek out small local producers in your grocery store or co-op; patronize restaurants that do more than merely performative buying of local and small producer foods. Now is the time of the advocacy chef and the activist restaurateur. 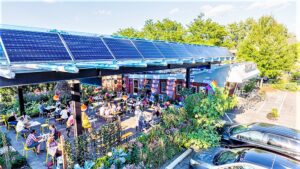 Mini-review #1 – Tiny Diner for a healthy shared meal
I met my friend CJ for dinner at Tiny Diner. We had to do a little strategizing to get all our dissonant dietary needs met, but I think we ended up with a win. CJ follows a diet characterized by low carbs, zero grains, most of his protein from fish or seafood, and most of his sugars from fresh fruit and red wine. He also restricts calories in the apparent hope of living forever, and he is poor, so some of his food is whatever’s being given away that day. I am not nearly so restrictive, but I do eschew red meat always and chicken for the most part, as well as slave chocolate and the huge list of foods I have allergic or gut reactions to. And I am not rich.
So here’s what we had, and I must say, it was very good. For drinks, I had a hibiscus iced tea with no sugar, while CJ had a single small glass of house red wine. Then we ordered a Macro Bowl (rice and quinoa base with broccoli, kimchi, avocado, tofu and additional seasonal vegetables) and a Lacinato Kale Salad (kale and shaved napa cabbage, lemon juice vinaigrette, grated Parmesan cheese, sliced almonds) with a side of grilled shrimp. And we split each dish between us, with the help of a couple of empty plates, except I ate all the tofu and CJ ate all the shrimp. We had a bit of kale salad left over that I took home. 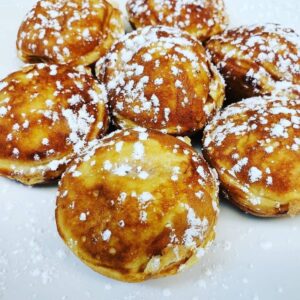 I was going to keep on doing one in-person dining and one takeout venue per month for The Dish 2.0 (in contrast to the original, more traditional format of making the whole piece about one restaurant, and ignoring takeout to a large extent). COVID has upended a lot of our traditions, and I don’t mind that. But it’s been often too hot to stay in my apartment. So I am going to restaurants to get cool and, incidentally, eat. (If we have another surge and it shuts down dining rooms before fall, I don’t know what I’ll do.)
So, on one of the worst hot days, I actually went out for breakfast, something I very rarely do any more. I went to the Standish Cafe, a brunch-only place which is just four blocks from where I live. When I do go out for breakfast, I don’t often go to Standish Cafe either. It’s not that it’s bad; it’s quite good in fact, and popular with a lot of the neighbors. But for me, the menu is kind of heavy on meats and sweets. Their signature side dish is Standish Potatoes, which I ordered by accident once because I hadn’t read the ingredients closely. It contains bacon, and to me it tastes more like bacon than potatoes, but that’s possibly because I really, truly dislike bacon. I wouldn’t eat it even if I did like it because I don’t eat pork, but I quite like a few pork dishes, mainly traditional sausages and deli ham.
Now I almost always get a veggie omelet with hashbrowns. The hashbrowns are crunchier than I like. (Tiny Diner’s are paler and softer than I like. There’s just no pleasing some people.) The sourdough toast and runny berry jam were both excellent, and they get points for using high-quality free-range eggs.
In the past, I have tried most of their sweet breakfast offerings, but not what I suppose is their signature dish in that category – aebleskiver, described on the menu as “Danish pancake balls.” I also have not tried their steel-cut oats, another unusual-for-around-here dish. They also have “handhelds,” a category that lumps sandwiches, burgers and burritos together, and “forkables,” basically salads, and three supper plates you can have for brunch if that’s your jam.