Brought together in sorrow and a hope for justice… 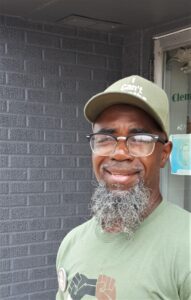 The day before Easter, 2021, I went to George Floyd Square to meet with Marquise Bowie, a member of Agape, and Marcia Sanoden, a “make-the-world-a-better-place” reader of Southside Pride, to talk about her offer to volunteer at Agape and what that might encompass. But we didn’t sit around talking. Marquise said she could start right now – and so could I. We could go out into the square with him as he welcomed visitors. He had been doing this since George Floyd Square was closed to traffic and he felt that a lot of those interesting, valuable, meaningful conversations were being lost, so he asked both of us to take notes, which we did.
Marquise introduces himself, “Hi, I’m Marquise. I’m with Agape. Agape means love in Greek. We’re out here to spread love … We’re turning street energy into community energy … We’re trying to spread love out here.” He gives everyone a flyer about Agape
Manuela is from Minneapolis. “This makes me want to cry … I feel very comfortable here,” she says.
Marquise tells her little boy, “Tie your shoe …” and then gives him a sucker. Marquise is carrying a bag of suckers that reaches from his waist almost to the ground.
Many of the people Marquise talks to have been watching Chauvin’s trial. Two women from St. Louis Park declare, “It should be first-degree murder. Chauvin should be in jail forever.” 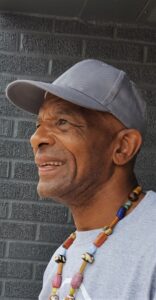 Steve Floyd, one of the founders of Agape