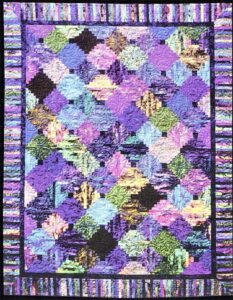 Bloomington Avenue is looking OK these days. I love to see it, because a year ago, I wasn’t sure. Businesses along Bloomington tend to be either very small and/or creative and unusual. Eateries capitalized on being cozy and intimate, and had to pivot to takeout, which was a brand-new thing for some. Now they’re some of the very last to reopen their dining rooms. Nonprofits and mutual aid efforts in this area are extremely utopian, trying to get people through dystopian times. It’s all a bit of a struggle but, driving the length of Bloomington from Franklin to 54th Street, it looks like most of us made it through 2020 and the second year, so far, of the pandemic.
For some of us, this is our second epidemic. But the last one wasn’t a pandemic, because it could be somewhat selective in its targets. There were “risk factors.” It made it very easy for the healthy to “other” and even scapegoat those who had the disease. And instead of snatching away loved ones in a weekend, it left you to linger for months and years, seeing them helpless and sometimes in pain. I am speaking, of course, of the AIDS epidemic.
At 25th and Bloomington there is a nonprofit that was born from the AIDS epidemic years. The years when an AIDS diagnosis was almost sure to be a death sentence. Open Arms now serves people with a wide variety of life-threatening conditions. They serve with prepared meals and are part of the nationwide Meals on Wheels network. But their history is entwined with AIDS. 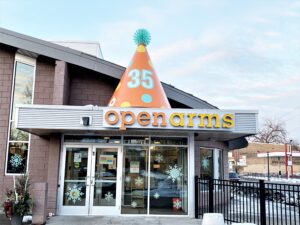 Open Arms was founded in 1986 by the late Bill Rowe, who began preparing meals for people with AIDS after losing a dear friend to the disease. It was a way to channel his grief into something positive. The effort grew into an organization with many other volunteers, and later expanded to include clients with other life-threatening conditions, as well as their families and caregivers. Rowe was an anthropology professor at the University of Minnesota, and after retirement continued to teach a special course on the Anthropology of AIDS while still building Open Arms. He passed away in 2016.
Open Arms is celebrating its 35th anniversary all this year. Today the organization has a huge building on Bloomington Avenue with a state-of-the-art kitchen, many professional staff members, over 7,000 volunteers, and serves over 600,000 medically-tailored meals per year. If Open Arms has touched your life, you can help them celebrate by sharing your story on social media with the hashtag #OAM35. If you want to donate or volunteer, see their website at www.openarmsmn.org. 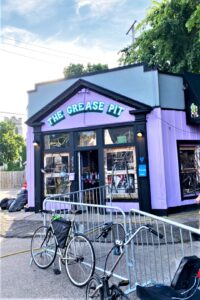 The Grease Pit at 28th and Bloomingto

Down the road just a few blocks is a new utopian vision of service – bike service. Grease Pit Bike Shop was founded a few years ago. They operate on a give-what-you-can, take-what-you-need, share-skills-and-stuff kind of ethic. During the pandemic, they moved outside when it was safe to, or took breaks when they needed to. But the George Floyd uprising and the coinciding explosion of homelessness and other precarity led them to start a “free store,” accepting donations and giving away groceries and necessities such as hand sanitizer, toilet paper, diapers and menstrual needs. This eventually morphed into the Phillips Free Store, currently housed down the road at Walker Church. Now they’re back to their DIY bike repair, skill-shares and used bike sales. Check Google for open days and hours, Instagram for most recent messages.
We’re going to skip over the action at Lake Street, 38th Street, and 42nd Street, since these are covered in other issues. But at 31st Street and Bloomington there are two Spanish-language businesses worth mentioning. One is Mi Boleto Travel Agency. They have a website that advertises current travel deals, but it appears you have to call to book travel. The other business is La Matraca newspaper, a weekly newspaper of Latino interests in Spanish. Like Southside Pride, they also have a web-based edition. I was curious what La Matraca means, and when I looked it up, it turns out to be a sort of percussion rhythm instrument sometimes called a ratchet. I guess that makes sense – it makes noise (e.g., the Bugle or the Clarion) but also it sets a rhythm for dancing or celebrating.
Down a little farther south, at 34th Street, is the Quilt Shop Co-op. This appears to be really flourishing and is emerging from the pandemic, which hit right at the start of its conversion to a co-op, with now having in-person shopping. Their quickly enabled online shopping will continue. I don’t know if they always did this, but not being a quilter or even a basic seamster myself, I was delighted to see they also sell fully finished quilts. And they are gorgeous!
Two of my most beloved neighborhood cafes grace the corner of 35th Street and Bloomington. One is relatively new to the area, and which I have written about before – Reverie Cafe and Bar, a plant-based eatery with coffee, kombucha, beer, cider and wine. The last time I checked, they were still working towards being open for indoor dining. They do have a very nice patio, though. The other is a longtime neighbor, and possibly one of your favorites as well – the May Day Cafe. As I mention in the restaurant review column also, they are reopening (have reopened) for indoor dining as of July 30, so they will be open by the time you read this.
Across Bloomington from the May Day is a strip of small shops. Currently open here are K-9 and Kitty Kutters, a pet grooming salon (by appointment only), Sea Wolf Tattoo, Greenbrier Montessori Preschool, RETHINK Tailoring and Sewing Lounge, and Lash Haus. I want to say more about those last two.
Lash Haus is owned by Mayowa Ojo, who got her first beauty qualification (as an esthetician) from Minneapolis’s esteemed Aveda Institute, but then “fell in love with lashes” and went to another state to learn all about that. She now is self-described as “a master lash artist, educator, and mompreneur.” A lash artist does lash extensions and other related services. The shop also offers teeth whitening and a lash “academy” to train new lash enthusiasts and expand the gospel of this interesting addition to your beauty routine. (It actually reduces the time spent on your beauty routine, apparently. You just automatically have fabulous lashes, with a bit of professional maintenance.) 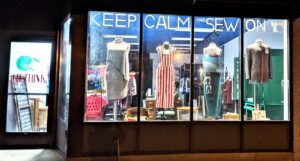 RETHINK is a combination of several related businesses. It’s a tailor shop, but also they sell “upcycled” clothing, teach people sewing and tailoring, and offer a sewing lounge, which is basically an onsite rental by the hour of a sewing machine, in a small group setting. It sounds lovely. The website I tried to use to check this out doesn’t work, so I was worried it might be one of 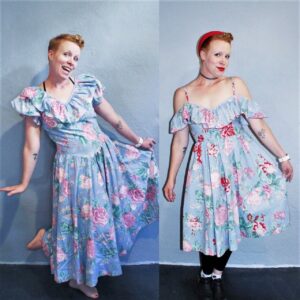 Upcycled clothing and classes at Rethink

these phantom businesses that didn’t make it. But I went by to check, and although it wasn’t open at the time, it appears to be very much in business. There is a little display on the window telling about the startup during the midst of the pandemic, and how it is all documented for posterity on Instagram. Short version – they had a grand opening on March 20, 2020, and then closed the next day. I found another website that does work and here’s the story: rethinktailoring.com/about-me. Click on “Shop” on the menu to check out that upcycled clothing.
At the corner of 46th and Bloomington there is another intriguing shop that combines unique products and services and also opened in the middle of the pandemic. This is Nine Keys Collective, which combines, now in side-by-side storefronts, a hair salon with a metaphysical shop selling crystals and such and offering tarot readings and other intuitive services. The best way to tell their story is to use founder Taylor Lowe’s own words:
“Nine Keys opened October 1st of 2020, and I started the shop in my house during the pandemic to replace the income I lost behind the chair during Covid and the civil unrest. Through readings and online sales, I was able to stay afloat, and wanted to keep everything going in a way that combined my love of card readings, crystal sales, and hair.
“I found the space on Bloomington Ave. while cleaning up the city, and it was the perfect space. I set up two chairs and found that I was very busy once we started to get back to our new normal. …The collective space opened in May of this year, and we’re starting to host events. We recently sold out our first workshop, and we’re also available for shopping on Tuesdays, as well as continuing to be an online retail experience.” 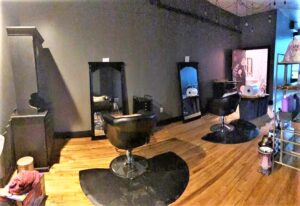 I don’t really have space left to tell all I found out on Bloomington Avenue, but here’s a quick rundown of some shops and cafés on Bloomington that are open. All of these have websites and other social media, so you can check their hours (which may have reduced since COVID) and also whether they have online shopping options or an online reservation system (most do). MN NAF! Hair Salon, Salon 45, Sift Gluten Free Bakery, Nokomis Bike Shop, Cake Plus-Size Resale, Urban Cottage (occasional sales, next one August 12 – 15), the Music Lab (has a summer camp first two weeks of August), Irreverent Bookworm, and Hot Plate. Also, Living Spirit United Methodist Church, that very rare thing – a truly multiracial Protestant church – is having hybrid services and biweekly workshops on racial justice (see their website for details).