The cops started it 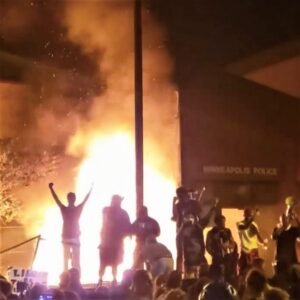 Filing for office in even-numbered years usually opens the Tuesday after Memorial Day. Per Minneapolis DFL tradition, the 2020 endorsed school board candidates met on that first Tuesday – May 26 – to file for office together, take pictures, and send out a press release.
It was the end of the first quarter of the pandemic. The presidential primary was over. Emergency remote school was almost done. Still no live sports on TV – at all – worldwide. Masks were becoming required in public spaces, including the Minneapolis elections office on East Hennepin Avenue.
As the candidates arrived one by one that Tuesday morning, each came to me sick with despair and grief. All four were on the phones all night long with constituents and community. The Minneapolis police had killed someone again. It was bad. Grotesquely bad. There was a video. A Roosevelt student recorded it. It happened at 38th and Chicago.
That last part hurt. It was unsettling. Things were loaded. I thought of Jamar Clark, Philando Castile, Justine Damond. I thought about the cycles of anger and outrage each of those murders generated. Actions and reactions. Repercussions compounding over the years.
The candidates went in and filed their paperwork to be on the ballot. I took a picture of the group but didn’t post it as planned. We drove to the Stone Arch Bridge in a line, carefully weaving through the new slow street barricades. After taking some literature photos there was a sense of urgency to get back to the task at hand. A few left straight for 38th and Chicago. I went home to my apartment on Nicollet Avenue, two blocks from the Fifth Precinct.
The scale of the situation started to become clear. Anger and anguish. The fallout might consume every atom of energy in Minneapolis for at least the next several days, maybe even a week or more.
As party chair I often think, What Would an Elected Official Do? People are going to be devastated, heated and grieving. Per usual. To me, the only way to even try to keep things on the rails meant showing up on the streets, getting spit on and sworn at by constituents whose friends, family and neighbors were killed by public employees. Accepting responsibility for the role, genuinely listening and showing humility – and meaning it – could go a long way.
Then the call went out to hold space at 38th and Chicago. The streets filled with people, radiating out for miles in every cardinal direction from the square. The mayor took this opportunity to make his first public statement on CNN. From the lens of anti-racism and decolonization, and by generally paying attention to how people perceive and react, things unfolded in unsurprising ways.
At the Fourth Precinct in 2015, it took four days of occupation and several orders to disperse late in the evening before the MPD started teargassing people. In 2020, the MPD started shooting “less lethals” at the angry teenagers and other crowds who had gathered at the Third Precinct on the first afternoon. It was unprovoked and at random. Our Boys in Blue were showing off.
The youth of Minneapolis have grown up seeing the police murder people who look like them without consequences. They are out of f**ks to give. Deliberately antagonizing them was a cruel excuse to give an opportunity to knock heads. Everything that followed was a proportional response.
More protesters gathered at the Third Precinct, incensed by the raw provocation. The indiscriminate shooting increased. People threw garbage cans at squad cars. The mayor called it “blowing off steam.” More showed up as the days went on. The “less lethals” became nonstop. People hid behind bus shelters and moved dumpsters into the street to protect themselves from the unpredictable violence, sometimes setting them alight.
The Target across the street wouldn’t let protesters into the store to purchase posterboard and markers to make signs. It got looted. Brand new flatscreen TVs and other detritus were used to build more barricades.
At this point the world was paying attention. Friends and family were reaching out. How come words won’t satiate people? Why Minneapolis? The cops started it, I replied. They killed George Floyd and took every opportunity to escalate, agitate and make things worse. The cops are rioting and the people are responding.
Like it or not, setting the Third Precinct on fire was a genuine revolutionary moment. An act of pure righteousness to open new worlds of understanding. The people declared themselves ungovernable and unilaterally took their power back. The largest international human rights movement in modern history had begun. The youth of Minneapolis carried all of this. The cops started it.
It is important to maintain this basic perspective while we live through the consequences. Things will continue to play out in understandable ways.
The call from the streets was genuine liberation, truly and finally. The work continues until that day comes. The enemies of this agenda, the powers that hold up white supremacy, are organized. They will no longer tolerate the great embarrassment of having lost control. They want the people to forget what it felt like to seize their power back.
Recognize the patterns. Counterinsurgency and genuine conspiracy used to diffuse movements. Manufacturing consent in the media by activating lizard brain emotions that distract from the issues. The constant surveillance, hyper-militarization and macho bullshit to give the exurbs a sense of pathetic comfort – it’s all connected. It’s meant to burn you out.
Keep focus. Eyes on the prize. Remember the demand of the streets. The blood and treasure spent. This is our job. Minneapolis must answer the call. For real this time. For real for real. Do it for the kids.