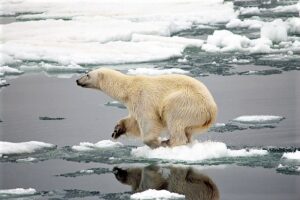 A large polar bear getting ready jump of a small piece of ice. Picture taken on Svalbard.

The Catholic Agitator of June 2021, a monthly newsletter, carried an article by the journalist Chris Hedges, entitled “The Age of Social Murder” which should be required reading for all of us. He defines the murderer’s weapon as global warming, seldom defined or recognized as such.
Each of the last four decades have been hotter than the last. The UN International Panel on Climate Change cited we are already at 1.2 degrees Celsius temperature (2.16 degrees Fahrenheit) above preindustrial levels. Anything above a temperature rise of 1.5 degrees Celsius will render much of the earth uninhabitable.
The Arctic ice along with the Greenland ice sheet are now expected to melt regardless of how much we reduce carbon emissions. A 23-foot rise in sea level, which is what will happen when the ice is gone, means every town and city on a coast at sea level will have to be evacuated. As the climate crisis worsens, the political constructions will tighten, making public resistance difficult. The ruling elites, despite the accelerating and tangible ecological collapse, mollify us, either by meaningless gestures or denial. They are responsible, and this can and should be deemed murder. Since no one sees the murder, it is too often ignored. However, it is murder.
What is occurring is not neglect. It is not ineptitude. It is murder because it is premeditated. It is murder because a conscious choice was made by the global ruling classes to extinguish life rather than protect it. It is murder because profit – despite hard statistics, the growing climate disruption and scientific modeling – is deemed more important than human dignity and human life. 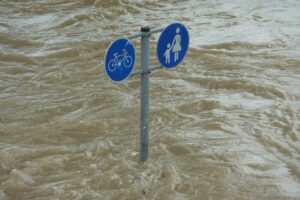 The massive resources allocated to the military and Veterans Administration come to $826 billion annually and are the most glaring examples of suicidal folly. The war machine does absolutely nothing to mitigate the human suffering caused by degraded environments that sicken and poison us.
The evil that makes all this happen is collective. It is perpetuated by technocrats and bureaucrats who collect, store and manipulate human data. They grease the wheels for Goldman Sachs, Exxon Mobil and BP. They write the laws passed by the bought-and-paid-for political class. They enforce the law. They are the corporate advisors. They pilot the aerial drones that terrorize the poor in Afghanistan, Iran, Pakistan and Syria. They profit from the endless wars. They run the banks. They deny food stamps and medical coverage and unemployment benefits. They carry out evictions.
These systems managers made genocides possible – from the extermination of Native Americans to the Turkish slaughter of the Armenians to the Nazi Holocaust. Why do we not resist? We are all complicit. We are overcome, paralyzed by the overwhelming megamachine. Failing to act means giving in to cynicism and despair. To exert moral autonomy is to refuse to cooperate, to wreck the megamachine. Rebellion is its own justification. It must be embraced.