We can do better than this 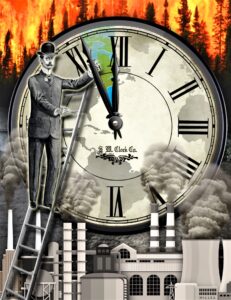 Between the record- breaking heat waves, major floods from Michigan to New York, severe droughts throughout the West, and the possibility that the Champlain Towers South collapse was exacerbated by rising sea levels, you might have noticed the impacts of climate change have officially arrived. We no longer have the time to prevent catastrophes caused by rising temperatures and changing weather patterns. While we absolutely must work to reduce our carbon footprint in the hopes that we can mitigate and reduce the damage, we must also begin to act seriously towards building resilience.
Climate change costs us the money it takes to rebuild from catastrophic events, it costs us increased respiratory issues, and it costs people their lives. Heat kills people who don’t have access to or can’t afford to constantly run their air conditioning, it kills people who are homeless, and it kills people whose jobs require them to be outdoors, like those who pick the food we eat or fight the increasingly violent wildfires.
There are ways to decrease urban heat through things like light-colored and reflective surfaces, which should absolutely be explored. But measures to increase resilience can also reduce greenhouse gas emissions and create a positive cycle of change, if we are willing to invest in them. These are the measures on which we should focus most of our energy and resources.
Minneapolis could reduce the cost burden of climate change while also reducing the city’s carbon footprint by investing in a program of weatherization and efficiency upgrades to the existing housing stock. Such a program would best be implemented in designated areas, perhaps a block at a time, with the program recruiting property owners as opposed to the more common method of forcing participants to apply. This way the city could focus resources on less affluent neighborhoods and neighborhoods with greater populations of Black, Indigenous, and other people of color (BIPOC) in order to encourage more equitable access. Focusing on specific locations could also have the economic benefit of maximizing efficiency of resources such as skilled laborers.
Another way to pursue resilience while also reducing carbon in the atmosphere is through urban greening, an extreme example of which is the installation of Miyawaki forests. These are small urban forests where native species, mostly trees, are planted close together in specially prepared soil, which makes them grow tall more quickly in search of the best light. While these offer some carbon sequestration, the main benefit to these mini-forests is in urban cooling, providing habitat for species that are under threat, such as pollinators, and reduction of air pollution which would improve the health of many of our city’s residents. The dense nature of these forests means that they would not serve residents recreationally, but their environmental benefits are significant. Whether the city pursues Miyawaki forests specifically or just an increase in urban greening, this should once again focus on economically disadvantaged and BIPOC neighborhoods. Studies from many cities have pointed to average temperatures being significantly higher in these types of neighborhoods due to less vegetation and tree cover than more affluent, whiter neighborhoods.
We also need to tackle our homelessness problem. We are still seeing encampments spring up here, there, and everywhere, only to be torn down at some point, and then pop up somewhere else. This is traumatizing and dehumanizing to our homeless neighbors; it also puts their lives in danger. Homelessness has always been incredibly dangerous, but the risks involved are getting worse. From the pandemic to the severe weather that comes with climate change, more people will die if we maintain our business-as-usual approach. We must invest in housing that is separated from “the market” so that people who have no income or low incomes have some semblance of safety and dignity, we must improve our mental health resources, and we must get over our puritanical and judgmental zero-tolerance policies towards the health crisis that is addiction.
But these policies will cost money, and if there’s one thing we know, it’s that we can’t raise taxes on the rich. Never mind that these fortunes would not be possible without the roads, fuel subsidies, and stability funded by our tax dollars. Never mind that the rich and the super-rich contribute far more to climate change through private jet travel and mega-yachts. Americans don’t have any right to expect them to pay their fair share to support spending on something so frivolous as our very survival. Sure, people who can’t afford to run the air conditioning all summer long, if they even have access to air conditioning, are more likely to die as heat waves become more common and last longer; but at least we know Jeff Bezos, the Koch brothers, and Elon Musk will be okay.