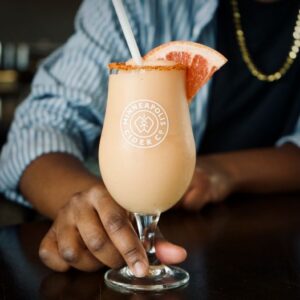 New eating places and concepts and “new to me”
Amazingly, new restaurants and cafes and food service “concepts” keep on opening. Three fairly recent openings, in descending order of grandness (which pretty much relates to price and that pampered, entitled feeling, but not necessarily to actual goodness as food) are The Butcher’s Tale in the old Butcher & the Boar location, StormKing Brewpub and Barbecue in the North Loop, and Side Chick in the Lyn-Lake area.
The Butcher’s Tale is not only in the Butcher & the Boar space, it’s being presented as a rethinking of the previous restaurant. Their shiny new website says:
“ONE DOOR CLOSES AND ANOTHER ONE OPENS
“The Butcher’s Tale presents a fresh approach to the culinary world of artisanal meats … an array of the region’s best bourbons and brown spirits; and comfortable, welcoming spaces.”
It has mostly the same people too, both management and staff, with a major indoor redesign and a different menu.
StormKing Brewpub and Barbecue is a new taproom for Rapids Brewing craft brews from Grand Rapids, Minn., paired with Texas barbecue and Tex-Mex food to go and a large North Loop patio. It looks pretty good if that’s your scene. It’s not my scene, but I don’t judge. 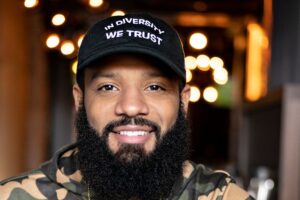 Side Chick is a fairly upscale fast-food place specializing in, obviously, chicken. The owner is real estate agent and nightclub owner Jado Hark, but it’s fronted by superstar chef Justin Sutherland, known for his St. Paul restaurant Handsome Hog as well as for his TV appearances on Top Chef and Iron Chef. Sutherland designed the menu and is believed to be a minority partner. Unfortunately, not long after opening, Side Chick was in the news when a shootout happened on the street outside the restaurant which wounded seven people, including an 18-year-old employee of Side Chick who was on the sidewalk outside after her shift. The owner claims there is no connection between the shooters and his restaurant.
Cider tap rooms are a growing trend in the Twin Cities and around the state. We only focus on the Twin Cities ones, so you have a choice between the Minneapolis Cider Co. taproom or the Number 12 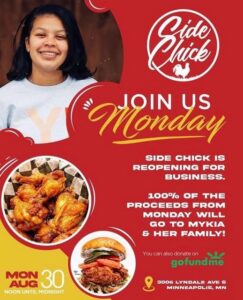 Cider taproom. The Minneapolis Cider Co. (791 SE 9th St.) has cider on tap in the taproom, along with cocktails made with cider, and also cider in cans to-go. For food, there is a creperie onsite called Breizh, which sells both sweet and savory crepes for brunch on weekends or a light supper during the week. Canned Minneapolis Cider Co. cider is also available from Lunds & Byerlys and Kowalski’s Wine Shops, Elevated Beer Wine & Spirits, and Ken & Norm’s Liquor, as well as at the Northbound Smokehouse Brewpub and Carbone’s in south Minneapolis. Also, just the coolest thing: this taproom has two pickleball courts!
The Number 12 Cider taproom also brews its cider onsite, and also sells it to-go in cans. They have a patio for on-site consumption. The Little Tomato Pizza food truck provides food. You can pre-order to-go items online via LittleTomatoMN.com. Also, both Number 12 and Minneapolis Cider Co. make and sell cider slushies. I never knew that was a thing, but I guess it is now. Number 12 Cider is also available in many liquor stores throughout the state, including Zipps, Hums, Falls, and Elevated in south Minneapolis.

The restaurant business
I have been trying to figure out what’s going on with Door Dash, one of the lesser (in my view) restaurant delivery services. I knew that some of the Dashers, as their “independent contractor” drivers are called, were holding a one-day strike on July 31 to try to pressure the company into being more transparent about their tips. Or lack of them, to be precise. This turned out to be too complex a topic for a lowly restaurant review column! So I’ll just say, if you choose to use Door Dash (I had two bad experiences with them and sort of wrote them off) please tip your Dasher, and indeed, all service workers. And support the PRO Act. (More information here on that – fortune.com/2021/03/31/pro-act-freelance-gig-workers. And more information on the dilemma of the Dashers here: https://bit.ly/3gK2eSj). After the revolution, tips will be a cringeworthy memory, not missed by tippers or the tipped.
Kim Bartmann keeps on making the news. She entered a settlement agreement that concluded a wage theft investigation conducted by Minnesota Attorney General Keith Ellison. The agreement means the Bartmann Group will be paying, in installments over the next few months, a total of around $230,000 in unpaid wages and damages to employees laid off without current pay from Tiny Diner in March 2020, and those who worked multiple shifts exceeding 40 hours at multiple locations but were denied overtime pay.

Two places I ate at that I’m not reviewing here
My friend and I stopped into Dave the Pie Guy for a long overdue lunch on a busy errand day, because we were shopping at Present Moment, which is next door. I thought you should know the place is there. It’s not bad, but the service is slow and weird, it being one guy who does all the cooking, baking, and serving and is very chatty as well. The pies are better than the main dishes for sure.
I finally got to Herbie Butcher’s Fried Chicken. It’s got such a minimalist menu, and taste-wise there is nothing that stands out about it except the jam on the biscuit. If you’re a vegan, either committed or striving, and you miss fast-food fried chicken, you will find this fills the void perfectly. I said a little more in a recent blog in Deborama’s Kitchen, my food blog on Medium – debrakeeferramage.medium.com/deboramas-kitchen-some-things-i-made-and-ate-this-summer-fd7b26501238. 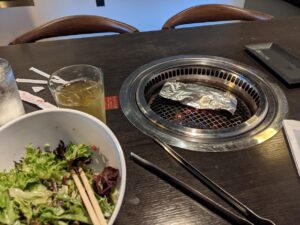 I mentioned eating at this place in the August article on Lyndale Avenue. Here is the actual review. I was almost the only white person in there, which is in my opinion a good sign. But when I sat at the booth and looked at the menu, my heart quailed. Anxiously, I asked the waiter, “If I order the salmon, am I going to have to cook it myself?” Yes, I would have to, he said, but he would help me and it would be fun. He was Japanese, and very busy, even though it was the late middle of the afternoon. But nice. And it was fun, as it turned out, but the only help was that he turned the brazier on for me and gave me a single sentence lesson in what to do. But I managed.
I had a very large salad to start, so large I couldn’t finish it. For the main, I ordered the salmon, which was wrapped in a foil packet with a miso marinade on it and one huge, perfect shishito pepper. Actually, there was a great advantage to cooking it myself. Everyone in Minnesota way overcooks salmon for my taste. So I took two minutes off the directed time per side and it was absolutely perfect. Almost 90% of the grilling menu of Gyu-Kaku is beef – very fancy beef. There is also at least one all-plant-based packet for grilling, and there are rice bowls and salads, too, so you don’t have to grill.
The prices are quite reasonable. They also sell bundles that you can take home and cook on your own grill if you prefer. This would be a super fun place for a small party of six to ten, and they have beer, wine and spirits. Highly recommend. 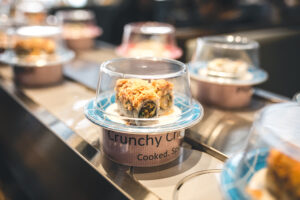 I love everything about Sushi Train. I love the concept of the conveyor belt so much that I would be fine if they didn’t even have waiters and just put everything on the belt. (To be fair, that wouldn’t be very practical. And the waiters are lovely.) But even when I order from the menu, I am transfixed by the conveyor belt going around with the little dishes. And I love sushi anyway, and feel good about eating at a place with so much fresh and raw stuff. And just because you order from the menu doesn’t mean you can’t grab something off the belt anyway if it takes your fancy.
I stopped in to Sushi Train at 2:45 p.m. on a weekday, after an exhausting trip back from St. Paul on the Green Line. Sushi Train is at 1200 Nicollet Mall and is open for dining inside (no patio). They also have delivery via GrubHub. I ordered a Tuna Poke Bowl and 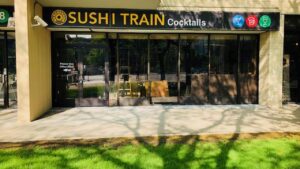 Vegetable Tempura. (That’s a very non-traditional pairing, but I didn’t care, I was famished.)
I’ve had Tuna Poke at other places and this was quite different. Poke sits in a pretty weird place, culturally speaking. Originally it was a traditional food of the Hawaiians, but it’s been colonized by the Japanese and then westernized by non-Asian Americans of the U.S. in the process of becoming a trend and a hot commercial product. So, as a silly old white lady who has stanned Japanese food since long before it became so widely popular, I refuse to even use the word “authentic.” (Oops. That didn’t count.) How the hell do I know what “real” poke even is?
This bowl had a base of white rice, a goodly amount of avocado (not a native plant in Hawaii, Japan, or Minnesota), a large spoonful of seaweed salad, several pickled daikon slices, some grated carrot, and a large scoop, at least a cup, of what I can only describe as raw ground tuna. Like tuna meatloaf before it’s cooked. Well, I loved it. The tempura was good too. I grabbed a little bowl of edamame off the belt, even though I didn’t need it. With a bottled iced tea and a generous tip, my bill was just a little over $20.

Mini-review #3 – Eating at the co-op
The Co-op Creamery Cafe is still not open. There is no word when, or even if. However, both Seward locations have reopened their little dining areas and brought back the hot bar and salad bar. With the heat wave, I have visited the Franklin store several times in the late afternoon to have my lunch, read some magazines, do some journaling, and get cooled down, before doing a small shop and going reluctantly back to the heat.
A great meal to have at the co-op is sushi, a side of Garlic Lovers Pasta Salad and a bottled drink of your choice. Your dining companions will mostly be houseless persons also using this space to cool off, and occasionally doze off. I love that my co-op doesn’t roust them out into the street at all, as far as I have observed. Some days, I think a better world really is possible.