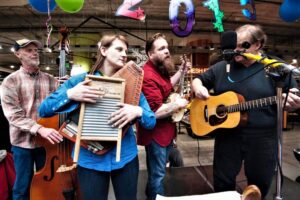 Midtown Global Market’s 2021 is faring better, slightly, than its 2020 did. There have been four or five vendors who have left the market, some for larger spaces elsewhere, and two or three new ones have moved in since we last visited. There has also been some shifting around.
Andy’s Garage and Leila’s Brow Art have moved to new positions nearer what I think of as “the front” of the market, i.e., where you enter coming from the lobby of the Midtown Exchange instead of from the street or transit station side. As far as I can tell, Andy’s Garage hasn’t changed in any other way. The only way Leila’s Brow Art has changed is that it’s growing. Even with the pandemic to consider, they seem to have taken on new threading artists, and where they used to manage the waiting list by a sheet of paper, they now have number slips, which work better. If you are someone who has been getting facial waxing for years, you might want to check out threading. It’s slightly gentler, and slightly more affordable. It does give you a marvelously smooth chin. 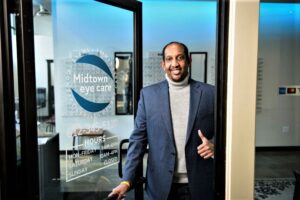 Another service you can now get at Midtown Global Market (MGM), though you could also call it health care, is an eye exam and new glasses or contact lenses. Midtown Eye Care was an optometrist practice and dispensary of lenses on Chicago Avenue, right near the corner just outside the Market, but unfortunately also right near the Midtown mini cop-shop which fell victim to arson in the uprisings of 2020. And Midtown Eye Care lost not only the building in which they rented space, but thousands of dollars’ worth of equipment, inventory, patient records, pretty much everything.
They finally got back up and running in January of this year, now in the lobby space of Midtown Exchange in what used to be the back of house for Ziadi’s restaurant, and before that The Rabbit Hole. There was also further expense and time involved in converting and building out the new space. They were able to do this through a combination of insurance, grants, and a long GoFundMe campaign.
Midtown Eye Care’s co-owner and spokesman is Ahmed Muhumud. (Warning – MGM’s website connects to Midtown Eye Care’s old website that still has their Chicago Avenue address and pre-pandemic hours. Check their Facebook page for more up to date information, or call or drop in with questions.) Midtown Eye Care accepts most health insurance coverage, and both Spanish and Somali are spoken there as well as English. They are closed on weekends. 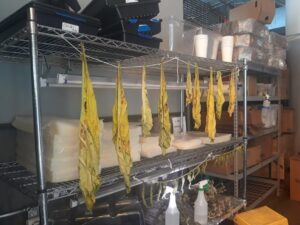 MGM has also become the home, as we mentioned briefly last year, of the Indigenous
Food Lab (IFL). At that time, planned classes were in abeyance and the lab kitchen was being used by volunteers with its parent organization NATIFS (North American Traditional Indigenous Food Systems) to prepare free meals for distribution to those in need. This year it is apparent that a lot more is going on. Between social media accounts and the IFL blog, we can see that they have done a live food demo to raise funds for NATIFS, they had a big State Fair event, they won an award from the Minnesota Twins (and got to throw out the ceremonial first pitch), chef and executive director Sean Sherman appeared on Rachel Ray, and they have gradually taken on a trainee or two to kick off the training program. 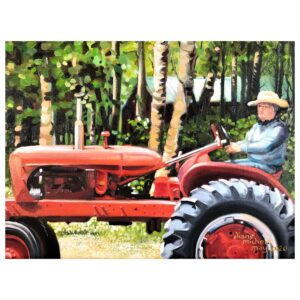 MGM has a number of interesting retail (non-food) vendors, even though food and drink take up the majority of
their space. (I’m not complaining; I like food a lot more than I like shopping.) One of my favorites is The Art Shoppe. It is open for limited hours for browsing, but there are other ways you can interact with and support this huge collective of south Minneapolis artists. They have an email newsletter you can sign up for, which will give you advance notice of events, and who the new featured artists are, and what discounts or incentives there are for their products. Also, The Art Shoppe has a fantastic online ordering website. Check out theartshoppemgm.com.
There are two small, but choice, grocery stores at MGM that are well worth a visit. The first is The Produce Exchange which, unlike its name suggests, actually sells way more than just produce. You can order online from them through Mercato for delivery or pickup. Another longtime favorite is Grassroots Gourmet, which sells locally-sourced grocery and deli offerings as well as grab-and-go lunches on Monday through Friday. They have a carefully curated selection of mouth-watering regionally-made cheeses, artisan-cured meats sliced to order, plus other farmstead meat and dairy items, as well as honey, maple syrup, cookies, gluten-free baking mixes and more. 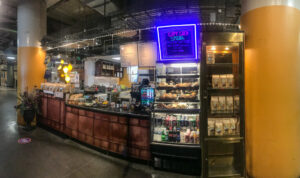 A couple of other vendors in the MGM combine food service with retail sales of food: Mapps Coffee & Tea and the new (from late fall 2020) Oasis Market & Deli. Mapps Coffee is one of the original founding vendors at MGM. They are a coffee roaster as well as a coffee and tea shop. Their amazing selection of fresh roasted coffee beans is available in typical 12-ounce coffee bags. Or you can sit in their small seating space after ordering great coffee drinks and snacks and pastries at the counter.
Similarly, Oasis Market & Deli offers an array of food-related experiences. Prepared foods, from sandwiches to full meals, and even desserts can be ordered at the deli for consuming in their dining area or for takeout. And there is quite an extensive market for your grocery shopping needs, including pantry staples, spices, refrigerated and frozen items, and a well-stocked halal butcher counter.
Dining options are almost back to pre-pandemic levels at the Market. The big interior space lends itself well to social distancing, and mask compliance when not actually eating or drinking is very high. The percentage of people getting takeout is higher than before the pandemic, and seating is spaced out more and never crowded that I have seen.
Eastlake Craft Brewery has got events! They are having Taproom Trivia on Sundays through the end of the year, at 7 p.m. Eastlake sells beer on draft or in crowlers (a very large can, basically) from their taproom and also sells crowlers online. In fact, you can sit in their outdoor patio and order online and they’ll bring it out to you. Instead of the old, crowded seating inside the taproom, they now have a seating area just outside the taproom, between Manny’s Tortas and Soul to Soul Smokehouse. And, although I haven’t tried this yet, you apparently can order crowlers online and food from Soul to Soul Smokehouse and it will be delivered. By a giant rabbit on a bicycle, if the strange, inscrutable website is to be believed. 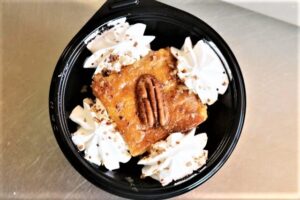 Dessert from Soul to Soul

Soul to Soul Smokehouse is the new tenant of Taco Cat’s old spot. They are a welcome addition of soul food and barbecue to the eclectic food mix available at the Market. As their website says: “Soul to Soul Smokehouse comes from three guys who learned to cook from their Mamas and their Aunties, from their Dads and their Uncles, over the BBQ.” Their menu is tried-and-true favorites like smoked turkey, beef brisket, ribs of either pork or beef, whole smoked chicken or barbecue chicken wings and things. With sides like cornbread, collard greens, mac and cheese and black-eyed peas. There are a few surprises in the dessert section – Kola ice cream, sweet potato ice cream and a Pecan Bourbon Cake.
Manny’s Tortas started out in the other Lake Street incubator, Mercado Central. It was one of their great success stories, and moved their main outlet (they have others) to the MGM. They sell a few other Mexican favorites, but their main thing is tortas, which is a somewhat European-style sandwich but with that lavish Mexican twist. A crusty white roll is filled with meat and onions and peppers and cheese from the grill, then topped with lettuce, avocado and sauce. It’s juicy and warm and very flavorful. 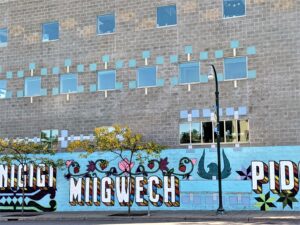 Division of Indian Work’s mural of thanks

Although a lot of things around the Lake Street corner and along Lake Street were destroyed in the uprising, particularly the dollar store right next door which is now a grassy lot, being taken over by nature and surrounded by a seven-foot chain link fence, there is one MGM neighbor I want to shine a light on. The Division of Indian Work is a great nonprofit that has a large building across Lake Street at 10th Avenue. Check out their Facebook page to see all the great things they do for Native American youth and families. They did sustain some damage in the uprising, but their community and the Lake Street community rallied round. In gratitude they have painted their street facade with a Thank You (in several Native languages) mural.
The thing that really took a big hit from the pandemic was the program of community and cultural events at the Market. These are getting back into full swing, if gradually. Family Fridays are back. On Oct. 15, at 5 p.m., the Roe Family Singers will be featured. This is free music in the middle of the market. Check out the MGM’s website, on the Events page, to see future events.