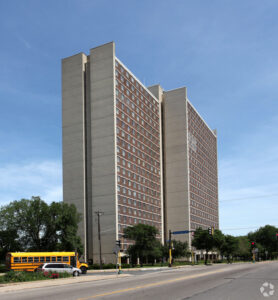 The Minneapolis Public Housing Authority (MPHA) has plans to build and maintain 16 deeply affordable scattered site developments throughout Minneapolis and two of these will be in Seward. The new buildings will consist of modular four- and six-plexes that will be available to people with incomes of 30% or lower than Area Median Income (AMI), specifically families with children. The new units will be a combination of two-bedroom and three-bedroom configurations. Residents will pay no more than 30% of their income on rent. This is exciting news, but I do have some reservations.

The two units being built in Seward neighborhood in 2022 will replace single-family homes owned by MPHA that seem to be currently occupied. MPHA has plans to work with residents for interim housing options and perhaps returning to a unit in the new buildings. My feelings on this are very mixed. On the one hand we are desperately in need of more truly affordable housing options and the schematics of the proposed buildings look very nice. But I am also a supporter of the original intent behind the single or two-family scattered site housing; there is a level of privacy and a benefit to having a lower density house with a yard that I feel even deeply poor families deserve access to. Sadly, the reality we live in doesn’t allow for that. In this reality higher density housing with less privacy and reduced access to outdoor play space for children is far better than the homelessness facing so many. This is a good start, but we need to keep pushing for better. Especially after living through the pandemic, we really need to figure out a way to house families so that all children have access to safe outdoor play.

These units will be run and maintained by MPHA which will allow for greater affordability and in theory is a very good thing and can be far more stable than maintenance that involves private developers. The concern here is that part of the reason for the opportunity to build these new units is the fact that the old units are in poor condition. They are in poor condition due to neglect in maintenance by the MPHA which has owned these properties for decades. We have also seen this problem at Glendale Townhomes where residents have been fighting for maintenance work to be done for years now. While new construction will likely need lower upkeep at first, that is not guaranteed. How do we trust that MPHA will adequately maintain new buildings when they continue to neglect current housing so badly?

These buildings in Seward are the beginning of a new push that hopes to add more affordable housing throughout the city, resulting in 84 new units in 16 small apartment buildings. Overall, this is positive news and an improvement in terms of sheer numbers, but we need to keep pushing for quality as well as quantity when it comes to housing our impecunious neighbors.