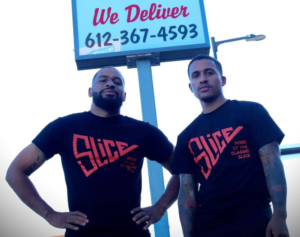 In New York City and many other major metropolises, pizza sold by the slice is more common, and “slice shops” abound. They are pretty rare in the Twin Cities. Becoming less rare, but still a definite minority, are BIPOC-owned restaurants. So it was great news when Hosie Thurmond and Adam Kado, two young African American best friends who love pizza, opened Slice Inc. pizzeria on the first of October. The pair had been trying to launch this restaurant since 2019, but, you know, COVID and all that. Just days after opening, they were forced to close again briefly due to a mysterious fire, which they suspected was arson. They are now open Tuesday through Saturday at 519 East Hennepin Ave. Some major losses of inventory and equipment were located in the parking lot and thus not recoverable through insurance, and Slice Inc. is raising $25,000 via donations at gofundme.com/f/help-slice-inc-black-owned-pizzeria-after-a-fire. 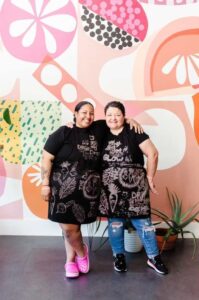 Catiesha Pierson, left, owner of the Dripping Root, and her mother.

This is reminiscent of the problems plaguing other BIPOC new food business owners. We covered one of these in September – the story about Side Chick on Lyndale Avenue, which experienced a shootout in the street outside their newly opened business that left a staff member badly injured. (southsidepride.com/2021/09/06/the-dish-more-restaurant-news-more-than-two-mini-reviews/.) Another which we didn’t cover was the two vandalizations of The Dripping Root on Minnehaha Avenue at 40th, which also occurred soon after their grand opening and necessitated a closing and reopening to repair damages. You can read about that here: bringmethenews.com/minnesota-news/for-the-2nd-time-since-opening-thieves-break-into-minneapolis-the-dripping-root-juice-bar. The Dripping Root sells fresh raw juices, smoothie bowls and all-raw chia “puddings” to have onsite or to-go, from Thursday through Sunday, opening at 9 a.m., closing around 1 p.m.

People were calling October “Striketober” because there were so many new industries, companies, and classifications of workers either trying to launch a union, deep into organizing drives, or on strike. (Locally, Minnesota Nurses with MNA had a short informational picket, and comrades from the Twin Cities caravanned to Iowa to support strikers from the John Deere factory.) But some of the biggest news over the past couple of years in the union organizing space in the Twin Cities has been in food-related or hospitality industries.
Two union locals, UFCW Local 663 and UniteHERE Local 17, have been having many successes (and inevitably a few frustrating fails). UFCW has organized a majority of the food co-ops, and has recently turned its attention to a bookstore chain, Half Price Books. UniteHERE already has more than 20 union hotels in the Cities, and at least a dozen union restaurants, and lately the union has been concentrating on craft beverages. Their first success was Fair State, a cooperative brewery. Following on, there were organizing drives in several breweries and even more distilleries. Tattersall, Lawless, and others were successful, followed recently by a win for Brother Justus Whiskey Co., with a workforce of ten. (Management voluntarily recognized the union, so if you’re a whiskey drinker, or know one, let’s show Brother Justus some solidarity love.) 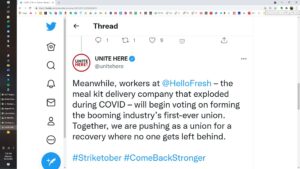 Nationally, the big food-related news right now is with a new vista for organizers – the meal kit delivery companies. UniteHERE started a campaign at the largest of them, Hello Fresh, a national company that made huge profits due to the pandemic, which unsurprisingly did not show up as gains for workers. As a culmination of “Striketober,” UniteHERE had a nationwide day-long program of militancy and visibility on Oct. 28. As their press release said, “As Workers Rise Up During ‘#Striketober,’ Hospitality Workers in 29 Cities Will March, Picket, Vote to Unionize, and More in Fight for Good Jobs.” This was also the day the union election began at Hello Fresh. 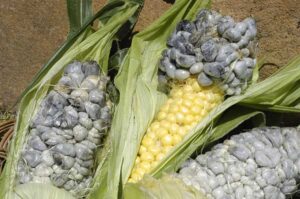 Interesting things that Mexicans eat
(will we eat them here?)

I found a really interesting piece about huitlacoche, known to the FDA only as corn smut, but also called Mexican truffles. But an even more informative piece is this one from Food Republic: foodrepublic.com/2016/05/04/what-is-huitlacoche-and-how-do-you-cook-it/. My friend who lives part of the year in Mexico, and lived almost half of her adult life in Iowa, says that it’s very expensive in the part of Mexico where she lives, but used to be thrown in the trash and burned to prevent spreading in Iowa. (In fact, preventing corn smut is one of the reasons for genetic modification of corn in the U.S., so they probably aren’t that bothered by it now.) But I thought how ironic that is. 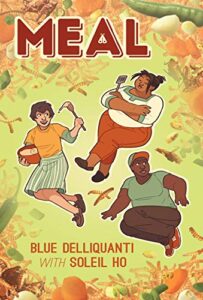 It turns out you can find huitlacoche in the Twin Cities. It is often sold canned or frozen in grocery stores with a large Mexican clientele. A number of Mexican restaurants sell quesadillas or enchiladas or other prepared dishes with huitlacoche. And I even heard vague rumors of fresh huitlacoche being spotted at local farmers’ markets, although never with enough specificity to pass on here. 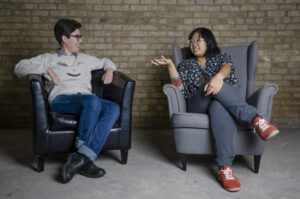 This put me in mind of a graphic novel by local illustrator and writer Blue Dellaquanti and Soleil Ho called “Meal.” This short work of art and fiction features a chef working with not corn smut, but insects as an ingredient, another “exotic” foodway that is ancient and traditional for our neighboring nation of Mexico. Here’s a short synopsis from Goodreads.com:
“Yarrow is a young chef determined to make her mark on the cutting edge of cookery with her insect-based creations. Though her enthusiasm is infectious, it rubs some of her fellow cooks the wrong way, especially Chanda Flores, Yarrow’s personal hero and executive chef of an exciting new restaurant. Her people have been eating bugs for centuries, and she’s deeply suspicious of this newbie’s attempt to turn her traditions into the next foodie trend. While Chanda and her scrappy team of talented devotees struggle to open on time, Yarrow must win over Chanda … or lose this once-in-a-lifetime opportunity to achieve her dreams.”

Long-awaited mini-review of Owamni by the Sioux Chef 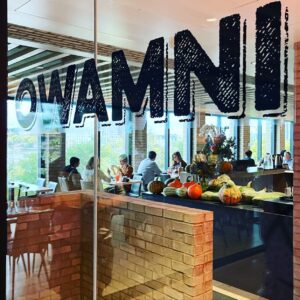 All of which makes a nice segue into our mini-review of the month. I say this is “long-awaited” not to imply that my devoted readers are waiting around in restless anticipation for me to review Owamni by the Sioux Chef, but because, due to the immense popularity of this restaurant, I made my reservation back in September, had lunch there in October, and am now telling you about it in November. And why is it a segue? Because, among other things, I ate crickets. Deliberately, that is. Paid for them and all.
We went for a late-ish lunch (1 p.m., actually early for me). We ended up getting a nice big table for four even though we were only a party of two, right by the massive window, looking out from the second floor onto the Mississippi River below. There are some wines and beers from Native-owned wineries or breweries available, or zero-proof cocktails, but we just went with tea.
Between the two of us we had four dishes and two herbal teas – mine iced, hers hot. We shared tastes and both took home leftovers. The four dishes we had were smoked lake trout with a white bean pate, wojapi, and 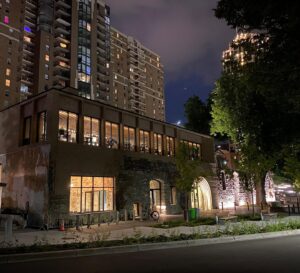 tostados; waksica (grain bowl) with quinoa, wild rice, nixtamal, pulled bison, wojapi, pesto, seeds, tepary bean and grilled vegetable; the garden salad with tomato, carrot, ground cherries, sprouts, and those toasted crickets; and simple wild rice with cranberries and a root vegetable.
We asked about the source of the teas (I was hoping to later find a complete ingredient list) and after some scratching around they came back with their supplier – Anahata Herbals in Duluth. (Check out their Facebook page. They have online ordering.) Everything we tasted was very good, even the crickets. Well, to tell the truth, the crickets didn’t taste of much once they were toasted. I think the toasting shrunk them. They were mostly a pleasing crunch and a small hit of protein, not unlike the seeds that also topped the salad. Don’t laugh. We’ll be very glad to have insects and seeds after the climate apocalypse.
I will return to Owamni soon, this time for dinner. It really is worth the wait. You can check out their menu and make reservations at owamni.com.