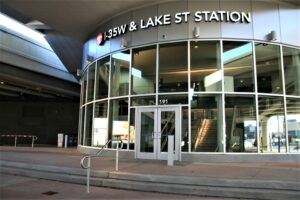 For four years, those traveling on I-35W have seen a mammoth construction project rise above Lake Street. The structure is part of MnDOT’s Crosstown plan to create a 14-mile highway Bus Rapid Transit (BRT) line connecting Minneapolis, Richfield, Bloomington and Burnsville.
On Thursday, Oct. 21, the first Metro Transit Bus pulled out from the station onto I-35W. This new station allows bus riders access to both the METRO Orange Line and I-35W express bus routes on the freeway level, giving easy connections to the freeway, to other local Minneapolis bus
routes, to the Midtown Greenway and to Lake Street – one of the busiest bus routes in the system. The new line upgrades and replaces Route 535. 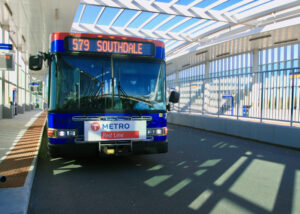 “Metro Orange is different than typical highway express routes,” said Luis Rangel, Metro Transit’s outreach coordinator. “Most routes that run on the freeway serve the 9-to-5 riders coming from the suburbs to downtown and back. This new route will provide mass transit opportunities for people who work the second or third shift and people who live in the urban core and work in the suburbs. And, since it operates on weekends, it offers chances for people to go to sports events or weekend entertainment downtown.”
Currently, the station is open from 5 a.m. until 11:45 p.m. with plans to extend the hours in early December.
Riders will pay $2 during non-rush hours and will have 2 ½ hours to use a transfer. “There are a few new elements that will speed up service. You can pay before you board. You don’t have to queue up and pay on the bus. You can board through any of the three doors. There are heating and lighting and TV monitors that will show arrival times. You can lock up your bikes.” Many of the features that once were exclusive to light rail will now be available to bus riders. 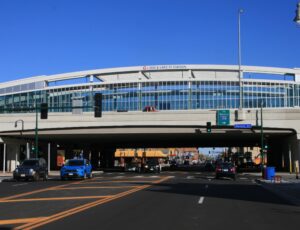 The new station cost $20 million, part of the $150-million price tag for the entire Orange Line. Funding came from the Counties Transit Improvement Board, the state of Minnesota, the Metropolitan Council, Hennepin County, Dakota County and the federal government.
BRT provides high quality service like light rail but is less expensive to build and, if needed, bus routes can move and change, unlike transit dependent on train tracks, said Rangel.
The new bus hub is a vast improvement over the original bus stop, he said. “Before the construction started, there was a staircase crumbling. It didn’t offer any accessibility. The previous bus stop had a shelter at the edge of the freeway. It didn’t offer protection from the traffic or the weather. This improved waiting experience is a big improvement. Before, the bus stop at the Lake Street level was very narrow and dark. Now, there is a big wide-open staircase with hundreds of LED lights. The new two- 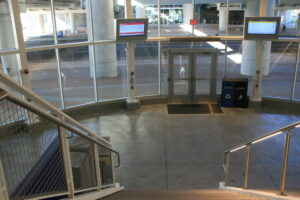 View of Lake Street from inside the new transit station

story hub is ADA accessible, with elevators to both levels.”
There are more improvements planned for the future. A Metro B line will bring new services to Lake Street and I-35W and give access to businesses in the region. There are 14,000 daily riders in the corridor. “As we see work and travel plans change post Covid, we are planning to extend the route. We are looking to make it a faster and better experience. Looking long term we want heating, lighting, emergency telephones and cameras,” Rangel said.
There are plans in the works to make improvements to the busy Chicago Avenue route and to add additional connections to the Midtown Greenway, allowing people to use bus transit and their bikes to reach their destination. 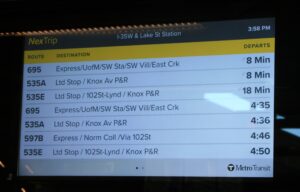