The vital role of a spiritual practice and more 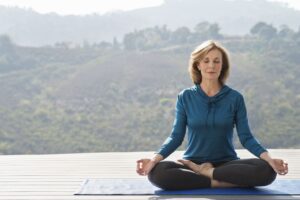 The case for a spiritual practice for good mental health

In recent years, there has been a merging between the body of knowledge of spirituality and spiritual practice and that of mental health and wellness. In a way, they were never separate. After all, the root of psychiatry and psychology – psyche – means soul. And philosophers as well as practitioners have been known to blend the two together in the 150 years or so that psychology as a valid field of study has been around.
Among the theorists of psychology and psychiatry who have embraced some facets of the trans- personal, the numinous, or the collective “oversoul” of all humanity are Carl Jung, Alfred Adler, Roberto Assagioli, Fritz Kunkel, Thomas Szasz, Abraham Maslow, Victor Frankl, Rollo May, R. D. Laing, Wilhelm Reich, Carl Rogers, Ken Wilber, Virginia Satir, Erich Fromm, Elisabeth Kübler-Ross and Timothy Leary. The convergence of the modern “psyche” (mental health, personality) with the historic concept of soul is also a theme touched on by several 19th and 20th century philosophers, including Henry James, Aldous Huxley, Paul Tillich, Martin Buber, Søren Kierkegaard, Shunryu Suzuki, Thomas Merton, Dorothy Day, Thich Nhat Hanh and Jacob Needleman. 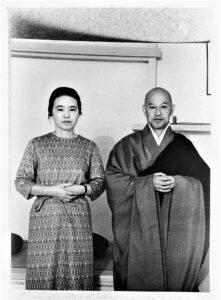 Shunryu Suzuki-roshi and his wife Mitsu in California, 1970

Since obviously this is too wide a net for this simple article, we are going to focus on the recent phenomenon of mindfulness meditation being offered (and finding some success) as a treatment for anxiety and other less-than-optimal mental states. (Mindfulness is not originally a psychological concept, but rather a spiritual one.) But this is not as great a leap in the subject as it may seem at first glance. Psychology-psychiatry began, despite its “soulful” etymology, as a quasi-medical model for treating extreme problematic mental pathologies. As such, it saw itself as enlightened science replacing superstitious religion (i.e., viewing mental illness as evil or demonic). But the later strands of existential, positive and humanistic psychology, founded or championed by those named above, came to focus on making the well better – happier, more loving, more effective socially – rather than just making the sick well, or as it usually played out, merely compliant.
Transpersonal psychology – beyond the “person” – set the sights even higher, and thus psychology began to presume to treat symptoms of existential angst, spiritual emptiness and the wholly rational anxiety of living in an insane world. To do this, it had to do a 180 and go back and consider the “perennial philosophy,” humankind’s whole history of spiritual wisdom. Psychotherapists learned to meditate, and to teach their clients how to do it as well.
I have found in my own life, especially since the pandemic began, that meditation, even without a teacher (even, in fact, with myself as the completely uncredentialed teacher of others) has in fact been a good treatment for anxieties, both personal and global. I think it’s central to my own quest to age gracefully. If you’re still having doubts, scientists say that a regular meditation or similar practice slows aging symptoms in the brain, as well as bestowing better sleep and a more positive outlook.

Some options for a spiritual practice

Although the spiritual practice I choose currently is meditation, influenced mainly by Suzuki-roshi in his book “Zen Mind, Beginner’s Mind,” I identify as Christian, specifically as Methodist. I sympathize with those who have rejected the religion of their childhood, if any, and I understand there are a lot of folks nowadays who have a purely secular upbringing. The good news is that Christianity and Buddhism are not the only religions to have a contemplative practice, and almost none of them require the practitioner to embrace all, or indeed any, of the dogma of the faith.
If Zen Buddhist practice feels like the wrong path for you, there are contemplative practices in Judaism, Islam, Hinduism, other branches of Buddhism, Sikhism, Shinto, secular humanism, many pagan faiths, and many (and varied – you wouldn’t believe how varied) Native American spiritualities. There are probably some in religions so esoteric I have never heard of them.
I have found it very hard to meditate on my own. Even in monasteries, contemplatives meditate in the context of a community. And for me, even being online on Zoom with only one other person has helped me stay more consistent in my meditations. Online meditation, as well as phone apps (see below) are available in various flavors. Here’s a link to a recommendation of 10, some free and some with a cost: www.healthline.com/health/meditation-online#our-picks.
Being in the Twin Cities, we are lucky to have numerous meditation centers as well as wellness centers that offer mindfulness as a treatment, and chapels, churches and temples that offer free, non-proselytizing meditation groups. Just to mention a few I know about: The Meditation Center (Yoga, Northeast Minneapolis), Common Ground Meditation (Yoga, Seward, Minneapolis), the Minnesota Zen Center (Zen, East Calhoun, Minneapolis), Sophia Wisdom Center (Christian, Whittier, Minneapolis) and Clouds in Water (Zen, St. Paul).
Since the early pandemic, most of these offer both in-person small groups and online options. There are even groups in Meetup.com that do meditation – see this list: www.meetup.com/topics/meditation/us/mn/minneapolis/. If you want to try apps, the most prominent two are Calm and Headspace (check out your favorite online app store). Another one I am getting a lot of push ads from is a Catholic Christian app called Hallow. (Yes, praying the rosary is technically a meditation – a contemplative practice for the laity.)
There are loads of books that can guide you on your contemplative/mindfulness therapy path, some more spiritual and some more psychological. Three that I use as I guide others in meditation are:
• “Zen Mind, Beginner’s Mind” by Shunryu Suzuki.
• “Roaming Free Inside the Cage” by William M. Schafer, Ph.D. (actually more of a book on the Enneagram but the two appendices on Taoist meditation are incredibly helpful).
• “Volume One, Sunday Morning Services on the Farm” by Stephen Gaskin (so now you know what a hippie I really am).

More people who are (or were) aging gracefully

I am varying from my rules for “Aging Gracefully” role models, established in last year’s piece, in two ways. One broken rule is that I am including a few recently deceased people (well, by recently I mean fewer than 10 years ago.) And for just one person, I am breaking the rule that they have to be older than me to be included. I’ll start with that guy. 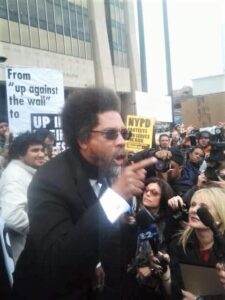 I feel a lot of affinity with Dr. Cornel West. Although my achievements, such as they are, cannot approach his, he works in a mental space that I also occupy a lot of the time – a space where religious and political ideals overlap so completely and seamlessly that I cannot understand how everyone can’t see it, and that, frustratingly, religion and leftist politics are perceived as antitheses. I was astonished to learn that Dr. West is less than a year younger than I am, as I always perceived him as a wise elder. One thing we have in common is longtime membership in Democratic Socialists of America (DSA), although he was prominent (and an honorary co-chair, back when we had such) while I was practically unknown. Another thing we have in common is dabbling in the arts and expression of younger generational cohorts. Dr. West, in addition to his public activism, his 23 published books and essays, and his appearance in numerous documentaries, has also served as a consultant on the Matrix film series along with existential psychologist Ken Wilber, and appeared as a character named Councillor West in two of the sequel films. Even more amazingly, he has produced three hip-hop albums and been a guest performer for a number of soul, funk and hip-hop artists.
This leads in turn to another rule-breaker, the late Ed Asner (1929 – 2021). He probably shared a platform with Dr. West more than once. Asner was also a DSA member, having been grandfathered in as a founding member of DSOC. And, like Ronald Reagan, he was a two-term president of the Screen Actors Guild (SAG). However, Asner used this position to sway the union and the industry to support left-wing causes, such as opposing the “low-intensity wars” in Latin America. Asner continued to pursue left-wing advocacy until his health declined, long after he had virtually retired from acting. 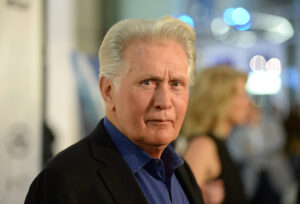 Another left-wing actor who also definitely shared a stage with Asner is Martin Sheen. Still very active both politically and professionally at 81, Sheen was born Ramón Antonio Gerardo Estévez in Dayton, Ohio, the son of an immigrant from Spain and his Irish-born wife. Neither appearing nor sounding “Hispanic,” the young Sheen found he could not get hired with his very Latino name, so he assumed his stage name, although he has never legally changed it. Of course, most of my readers will remember Sheen as fictional president Jed Bartlett from “The West Wing,” although he is also known for his breakout role in the independent film “Badlands” and his role in “Apocalypse Now.” Sheen makes the list as someone who combines a deep Catholic spirituality with his firm left-leaning liberalism (in his youth, before he settled on a coherent philosophy, he was active in the Dorothy Day-led Catholic Worker Movement) and uses his privilege and power to aid youth and many marginalized communities. 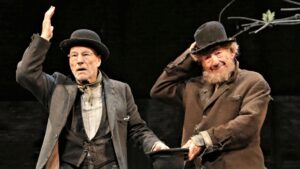 Sir Patrick and Sir Ian in ‘Waiting for Godot’ in 2013

Two British actors, both “Sirs,” made my list. The first is Sir Ian McKellen, who needs no introduction. Only surprising if you don’t know gay history, McKellen, although out to his close-knit theater community, did not come out to the general public until 1988, goaded by an attempt to pass a horrid law against LGBTQ rights, “Section 28.” (Sadly, it passed, but was repealed in 2003.) McKellen is an absolute Renaissance man, and another one who stays young by participating freely and happily in youthful arenas, such as, in his case, Twitter. (Follow https://twitter.com/IanMcKellen, and also check out his awesome website.) Although he still acts, he is most known now for his witty talk and writings. Here he is on all the names he is called:
“Serena was wittily coined by Stephen Fry at a gay fundraiser,” Sir Ian 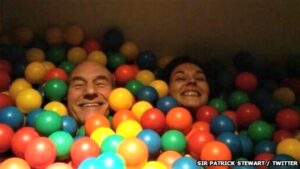 told The Independent a few years ago. “Others favour [calling me] Damian. In the U.S., impressed and unused to titles, I am invariably Sir McKellen.* Computers address me as Siri McKellen. I answer to all.”
[*I don’t think we are impressed, just confused. “Lord/Lady” can be used with the surname in most cases, but “Sir/Dame” are applied only to the first name. And as Americans, we are actually not supposed to acknowledge civilian rank titles at all!]
I can’t talk about Sir Ian without also including Sir Patrick Stewart. As you may know, the two are great friends, as well as appearing in several notable stage shows together. You might think they became friends because both are involved in a lot of modern science fiction and fantasy films, both are left of center, and they’re getting to an age where a lot of their counterparts have died off or disappeared. But no! They were friends from youth, both being working-class northern boys who got into Cambridge. In 2013, McKellen actually joined the Universal Life Church and “married” Stewart – to his third wife, jazz singer Sunny Ozell.
Well, I’ve run out of space. I was going to tie this back to the spirituality theme by including a trio of Canadian-American songwriters with spiritual and political leanings, (one deceased, so another rule-breaker). You’ll have to come back for the next installment which will highlight Joni Mitchell, Buffy Sainte-Marie and Leonard Cohen as aged and graceful.