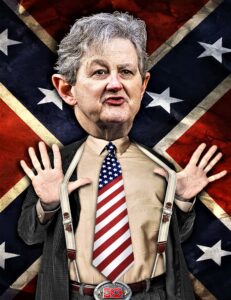 Democrats are being seriously trolled by Republicans.
Paul Gosar sent out a crudely modified anime cartoon depicting him cutting the head off Alexandria Ocasio-Cortez (AOC).
Marjorie Taylor Greene, during the 2020 campaign, posted an image on her Facebook page of her holding an automatic rifle alongside photos of AOC, Ilhan Omar and Rashida Tlaib, saying she was going on “offense against these socialists.”
Lauren Boebert made up a story about being in an elevator with Ilhan Omar and remarking to a security guard or an aide (depending on which version of her story she is telling), “Well, she doesn’t have a backpack; we should be fine,” implying that Omar is a suicide bomber and a terrorist. One of Boebert’s fans was so inspired by her “joke” that he sent this voicemail to Omar: “I would love the opportunity to take you off the face of the f*cking Earth, you Muslim piece of sh*t jihadist. We know what you are, you’re a f*cking traitor. You will not live much longer, I can almost guarantee you that.”
The reason these Republican members of Congress do this is because it excites and delights their base. Trump has shown there’s money to be made in going as low as you can with fear and loathing: “Brown people are coming across our borders to take our jobs. Send me money!”
The attacks are crude and stupid. They aim for the lowest common denominator, and they hit it. They have all the elegance of a street brawl.
On the other hand, Sen. John Kennedy of Louisiana has all the charm of a Southern gentleman and the venom of a rattlesnake.
He’s smarter than the brawlers. He graduated magna cum laude from Vanderbilt, president of his class, got a law degree from the University of Virginia, was executive editor of the Virginia Law Review, earned a Bachelor of Civil Law degree from Oxford and has published numerous books on technicalities in civil law. But he can play the hick to appeal to the street brawlers.
On Nov. 18, at the hearing before the Senate Banking Committee to confirm Saule Omarova as Comptroller of the Currency, Kennedy took a star turn in his questions for the nominee. Omarova was born in the Soviet Union, came to the U. S. as a college student and became a U. S. citizen. All elementary school-age children in the Soviet Union were automatically enrolled in Komsomol, the Communist Youth League.
Omarova is supported by progressives because she favors stricter regulation of banks to prevent another 2008 credit collapse, so the Wall Street Journal called her “A Banking Regulator Who Hates Banks.”
When it came time to ask his questions, Kennedy said, “You have the right to believe every one of these things. You do. This is America, but—I don’t mean any disrespect—I don’t know whether to call you professor or comrade?”
He effectively accuses her of being a communist and forces her to deny it.
When LBJ was president, a young man came to see him. He was interested in running for a congressional seat in Texas, and he was asking for advice about how to run against a popular incumbent. LBJ told him, “Accuse him of sleeping with hogs.” “But,” the young man protested, “he doesn’t sleep with hogs.” “Of course not,” LBJ said, “but he’ll have to deny it.”
Once you start denying something, some people will believe there must be some truth in the accusation.
The last time Kennedy prefaced one of his zingers with, “Now, I don’t mean any disrespect,” he was talking about Nancy Pelosi, and he continued, “but it must suck to be that dumb.”
Kennedy’s attack on Omarova probably doomed her candidacy. Some moderate Democrats have said they can’t support her, and there is no expectation that any Republicans would, so it seems likely her nomination will fail—a singular victory for Republicans in a Congress run by Democrats and a personal victory for John Kennedy.
It’s possible that the farce about communists in the banking regulatory agency last week was just a tryout in the auditioning for vice president that seems to be going on in the Republican party. The governor of Texas versus the governor of Florida versus the governor of South Dakota. Maybe Kennedy thought, “There’s room in that clown car for one more act. I can scare the hell out of them with stories of elitists who think they’re better than we are and who want to take our money and give it to minorities and immigrants and people who haven’t worked and don’t want to work.”
Nobody has commented on the striking congruency of the Senate hearing with the QAnon conspiracy theory at about the same time that John F. Kennedy (or maybe John-John, JFK’s son) would reappear in Dallas in November and run as vice president on the 2024 ticket with Trump. What an amazing coincidence. Or was that Kennedy’s clever way to plant the idea in QAnon that John F. Kennedy, or maybe his son, or maybe, just maybe, a reincarnation of John F. Kennedy (or someone with the same name) would be Donald Trump’s running mate in 2024?
It’s a long way to 2024. Most of us haven’t recovered yet from 2020. But it is interesting to see Republicans race to the bottom and throw mud. The trick is to throw mud at the Democrats without getting too much of it on yourself. Gosar, Greene and Boebert dirtied themselves throwing mud, but Kennedy, sounding like hominy grits and biscuits and gravy, comes off as homespun and sincere. It played well for his voters, and it played well for his funders—the banks.
At this point, you’d have to concede Sen. John Kennedy is the leading candidate for vice president on a Trump ticket next time around.