Understanding Groundhog Day and the myth of Persephone 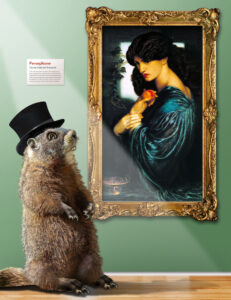 “When he comes out of the hole and sees his shadow, then it’s six more weeks of winter.”
It makes sense. If the groundhog comes out of his hole on Feb. 2 in Minnesota, and he sees his shadow, that means there’s most likely still snow on the ground, so it probably wasn’t the shadow that caught his eye. It was probably the snow, and that snow would cause him to think, “Well, that means six more weeks before that stuff melts. I’m going back to sleep.”
Like all important rituals passed down to us, there’s no doubt some elementary wisdom behind it. It’s probably a Northern European agrarian myth, begun to signal farmers when to plant. It’s not a good idea to put anything in the ground around Feb. 2. Best to wait six weeks—around Easter—the time of sacrifice, death, burial and resurrection. That’s the time to start planting things in the ground.
It is possible that the farmer in Pennsylvania who made up that story knew something about Ancient Greece and the stories the Greeks told farmers 3000 years ago about when to plant.
For the Greeks, the time to start planting was midway between the winter solstice and the spring equinox—around six weeks after the winter solstice, around Groundhog Day. But, for the Greeks, that day was one to celebrate—not the ugly groundhog, but the beautiful goddess Persephone, returning to earth from her conjugal bed with Hades, the ruler of the underworld, the land of the dead. In Rosetti’s lovely painting of her, she emerges from the cave and turns back in longing and memory to taste one last pomegranate seed. But she does emerge from the cave, and she does help her mother, Demeter, grow things in the ground. And the planting begins. Midway between winter solstice and the spring equinox was the best time to plant in the Mediterranean cultures from North Africa to Greece. Farmers could harvest their crop before the late August sun burned everything.
I like to imagine it was some hippie farmer who lost his job teaching Greek in the local high school in Pittsburgh in the 1870s when the school board decided teaching Greek wasn’t practical enough. He moved to the country and had to learn when to plant, and once he learned, he became an expert at it. As a joke he transposed Persephone with Punxsutawney Phil.
That’s some transposition—to turn a beautiful goddess into a fat rodent.
Was this some Christian bashing of the agrarian traditions that developed into paganism? Was it the Christians saying, “Beautiful goddesses don’t come out of the ground in February. Fat rodents come out of the ground in February. A true religion would worship a god who comes out of the ground at Easter, a much better time for planting.”
And the Pope might conclude, “And there’s no celebration of a goddess descending into the earth to an unholy reunion with her lover in hell at some time in August, midway between the summer solstice and the autumnal equinox. There is, however, the Assumption of the Blessed Virgin bodily into heaven at about that time.”
The Emperor Constantine figured all that out. He put the Christian holidays at the same time as the pagan holidays, so we celebrate the birth of Jesus and a week later we celebrate the birth of the New Year. And we celebrate the death and resurrection of Jesus at the same time the ancients celebrated the Osiris and Dionysus myths of resurrection and fertility.
Constantine isn’t generally acknowledged as the one who collected the stories of Jesus and made them into Mark, Mathew, Luke and John, but it was he who in 325 created a Holy Roman Catholic (as in universal) Church. It was loyal to Rome, Roman law and Roman custom.
Ever since Jesus tried to drive the money changers out of the temple, every do-gooder in history has dreamt of leading a mob against the centers of oppression. Constantine recognized the threat. He sanitized the stories of Jesus by taking out most of the negative references to Rome and released his new, revised book, the New Testament.
The Protestant faith broke off from the Catholics on class lines. The craftspeople and small burghers wanted more control of their towns and guilds and more control over the value of their work. The Catholic Church aligned with the feudal classes. It was for the divine right of kings and papal infallibility, and against these new small businesspeople in towns who wanted to question everything.
The very public conflicts within the Catholic Church today are the struggles between the authoritarian old guard and the more socially progressive forces around Pope Francis. The College of Cardinals no doubt figured that there is no future with the old guard, and it’s time to try a little Liberation Theology. That struggle was crystallized in the recent meeting between Biden and the Pope. The reactionary bishops wanted to deny Biden communion, participation in sharing the body and blood of Christ, because Biden supported a woman’s right to an abortion. The Pope said Biden is a good Catholic. That means being a good Catholic is different than it was just a few years ago. The Catholic Church is changing. It’s so old that when it moves it creaks and makes a lot of noise. But it wants its sheep to stay in their flocks and knows it may have to climb steep hills to round up the faithful.
And we moderns have adopted a groundhog to repudiate the myths of antiquity. All across the northern part of North America, a very secular ritual is played out on Feb. 2. It’s not religious. The groundhog doesn’t represent a redeemer or a Greek goddess. It’s just a groundhog, and, if he turns away and runs from the sight of the snow, he’s just saying wait another six weeks before planting.