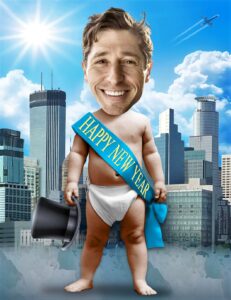 You survived a pretty rough first term of office.
Standing up to the president of the United States, sending him a bill for the added security necessary to guarantee him a safe environment to hold a political rally, was the easy part. You were getting good marks from the media on your handling of the coronavirus. Then, George Floyd! And the world watched Minneapolis Police Officer Derek Chauvin choke the life out of George Floyd on a schoolgirl’s iPhone, and we saw the historic retribution by an angry people demanding justice, thousands of them, standing in the streets, driving the police out of their fortress and burning it to the ground.
You demonstrated remarkable courage in ordering the police to abandon the 3rd Precinct. It was an important historic precedent—an elected official, the mayor of Minneapolis, told the police they should surrender to the mob. Abandon ship! The cops got post-traumatic stress disorder as a result of you overturning the accepted order of rank and privilege. The cops thought you rushed to judgment. You had already found Derek Chauvin guilty. You were taking the mob’s judgment as final. This was the end of the uninterrupted history of slave-catching that was the tradition of municipal police departments.
People were finally saying it was wrong for a white cop to murder an unarmed Black man.
But the mob was starting to go out of control. Some Boogaloo Bois were firing automatic rifles into the station house, trying to provoke return fire from the cops into the mob. Some right-wing nutcase carrying an umbrella was smashing in store windows with a hammer, encouraging looting.
You had to act. You had to do something to stop the protest. They want the precinct station? Fine. They can have the precinct station.
But it was too late. Right-wing agent-provocateurs got gullible demonstrators to join them in ultra-left adventures that destroyed the offices of MIGIZI, a Native American nonprofit that helped kids stay in school, and Gandhi Mahal, an Indian restaurant that was a left-wing favorite, and they looted Target, and they destroyed Latino businesses up Lake Street to Hennepin. Most of it focused around Lake and Chicago.
And, finally, it was over.
But the protesters, the ones who started the demonstrations against the precinct station, were still coordinated and organized by Black Visions Collective. It was their organizing that got the city to begin an Office of Violence Protection. They were in contact, and they held a rally, and they marched to the street below your apartment, and they ordered you down to meet with them, and it didn’t go well. You came down in casual dress, tried to talk to the crowd, but the crowd would hear none of it, and hecklers drove you back upstairs. You were probably relieved. It was terrible optics for the demonstrators. It excited their base, all that talk about abolishing the police, but it also excited resistance to change.
As a testament to her organizing and dedication to making the mayor accountable, Sheila Nezhad got more than 50% of the votes for mayor at the DFL City Convention—just short of the necessary 60% for endorsement.
Then, Black Visions Collective pushed it further. They organized the Powderhorn Manifesto—a meeting in Powderhorn Park on the stage at the bandshell. They got nine council members, a veto-proof majority, to agree to change the City Charter to transform the MPD into a Department of Public Safety. They had “Defund the Police” on a banner across the front of the stage. They wrote an amendment to the Minneapolis charter creating a Department of Public Safety to replace the Police Department. It was vague, confusing and incomplete. Black Visions had a competing amendment they had written. It was vague, confusing and incomplete. The City Council went with the Black Visions version.
The amendment didn’t do well at the polls. It was well-meaning, but the lack of an actual concrete vision by Black Visions scared the hell out of Black voters in North and South Minneapolis. It was ultra-left and, as a result, it alienated the progressive base but motivated the opposition to vote for you and for a strong mayor reorganization of city government. That charter amendment will probably have an even more profound effect on our future than changing the name of the Police Department.
You seem like you genuinely want to get along with the progressives who opposed you in the election. You appointed former political rivals, Nekima Levy Armstrong and Sheila Nezhad, to a committee that will recommend changes to the MPD; and you appointed Kathy O’Brien, former City Council member and former University of Minnesota administrator, to reorganize city departments—two committed progressives and a thoroughly competent moderate. Good choices.
I opposed the drift toward a strong-mayor form of city government. There’s not much danger of abuse of power with you as mayor. You’re a good liberal with a strong sense of fairness and justice. But what happens when we elect someone like Trump or Charlie Stenvig? Spreading the power among the many is messy and inefficient, but it makes the abuse of power less likely.
But I digress.
Congratulations, Mr. Mayor.
You survived a first term borne from the bowels of hell, and the voters have chosen you to lead them out of the present wilderness.
We wish you the best of luck. It can’t be as bad as it was. It’s got to get better.
We’re all pulling for you.
We’re all in this together.