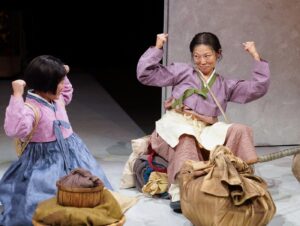 The time is 1950 and all of Korea is involved in a war between the North and the South, each side supported by large armies. Bina, at age 10, is the youngest of her family of apple growers. They produce some of the best apples in Korea, as Bina reminds everyone she meets. But as battle lines move up and down the country, the family is forced to walk from their home in Geochang to where they hope to find safety – the port city of Busan, a city that will become a major center for refugees.
“Bina’s Six Apples,” a production by playwright Lloyd Suh, is having its world premiere at the Children’s Theatre. It is a gentle but thoughtful play. Suh’s own parents arrived from Korea, settling in 1972 Detroit, where Suh was born. His father’s family owned an apple farm in Korea and were forced by the war to flee their home. But this is not a biography. “The play is not about literal people. It’s a fictional version, inspired by stories and images that I heard as a child,” Suh said. His father was very young when they escaped and he didn’t remember a lot of details, but “they had images of the war and the play is inspired by those images.”
The play tells the story of how each member of Bina’s family carries on their back something to help the family survive on their 70-mile walk to Busan. Her parents, grandmother, brother and sister – both older – carry water, food, pots and pans and other basic necessities. But Bina, just 10 years old, can carry only six apples in her backpack, one for each member of the family. They will eat them, her father tells her, when they arrive at their safe (they hope) destination.
The family begins their journey across mountains and rivers but is interrupted by an exploding bomb and Bina is separated from her family. All she knows is that she needs to head to Busan, on foot, to find them again.
Along the way, Bina discovers that she must use her apples to help her on her journey. Nowhere is safe, especially for a little girl. She seems to be alone in the world but soon meets people who will change her life.
The first person she meets is a mother looking for her own lost daughter. The woman is hungry and begs Bina for an apple, but Bina refuses. The apples are for her own family and are her only remaining connection to them. The second person she encounters is an army deserter who tries to barter his knowledge of how to find the way to Busan for one of her apples. Find the bright north star and then turn so you can face southeast, he tells her, and always travel in that direction. Bina still will not give up her apples but while she sleeps, he steals one. She has one less apple, but she has gained knowledge that will help her on her journey.
And Bina is already changing. As she meets other characters, she is more willing to exchange her apples for the things she needs to find her way to her destination. The people she meets are war-weary and, just like Bina, trying to survive in the confusion of conflict. In these characters she, and the audience, see not just hunger, sadness and fatigue but also hope and humor. There is the old boatman, a merchant, and a boy who is also separated from his family. In the end, Bina has gained self-assurance and learned not just how to use her wits, but how to open her heart.
The actors give moving performances, with four of them playing multiple roles. The set is unadorned, but the night sky features a bright north star and the ravages left by the bomb blast that separated the family remain on the stage, a reminder that the war is everywhere.
Lloyd Suh said that he decided on his vocation as a playwright because as a child growing up near Indianapolis, he found himself somewhat isolated as the only non-white student in his school.
“Books and literature were my escape,” he said. “I had in my mind that I would be a novelist. Writing was a way of making sense of the world. But in college, I had a more social impulse and spent a lot more time in the theater department. I’ve got a lot of that energy. I appreciate the impulse to do half my work on my own and the rest working with others.”
In “Bina’s Six Apples,” Suh worked with director Eric Ting, costume designer Junghyun Georgia Lee, scenic and lighting designer Jiyoun Chang, as well as cast members Olivia Lampert, Albert Park, Sun Mee Chomet, Elizabeth Pan, Joseph Pendergrast, Shelli Delgado and Jayden Ham.
The area that Bina’s family fled became the site of the Geochang massacre, where the South Korean army murdered unarmed citizens, including 385 children, in 1951, the year after this play takes place. But this is not a history play. It is a tale of resilience and hope.
“I never think of a play as learning. I think of myself as a storyteller, trying to convey something that through story helps illuminate who we are and where we come from,” Suh said. “The parts that are resonant with anyone is the understanding of what we are capable of as individuals, what we can do in the most trying of circumstances and how to be helpful with one another.”
“Bina’s Six Apples” runs through Feb. 13 on the Cargill Stage, then moves from Minneapolis to the Alliance Theater in Atlanta. The production is recommended for theater fans ages 9 and older. Tickets can be purchased at childrenstheatre.org/binas or by calling the ticket office at 612-874-0400. Ticket prices range from $15 to $63. Bring your mask and proof of vaccination or a negative COVID test. Bina’s apples are stolen, bartered, traded and given, but – spoiler alert – there is a happy ending.