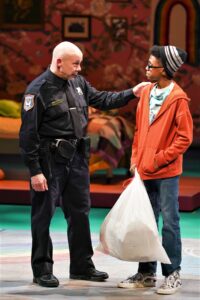 At first glance, the Children’s Theatre’s latest production, “Something Happened in Our Town,” seems to have been written for the Twin Cities, but it’s bigger than that. The plot revolves around two families, next-door neighbors. The Perkins family is Black, the Hartleys are white, and the play follows both families’ reaction to the news of the killing of a Black man by a white cop.
Both families have young children in the same class at school, and the two have become fast friends. Emma, a white girl, (played by Lola Ronning) and Josh, a Black boy, (played by De’Anthony Jackson) need each other. Other students bully them both and they don’t have friends at school.
Josh’s 16-year-old brother Malcolm (played by Calvin Zimmerman) is like many boys who are becoming men, ready to stand up to injustice but not really sure how. He wants to go to the protest, but his father is against that, afraid for his older son’s safety.
The two mothers are friends because of their children’s strong bond, but things get strained because the families see the events so differently.
Emma’s father is never seen or mentioned, but her Uncle Manny (played by Dean Holt) is a surrogate father. He’s also a police officer. Emma’s mother, Sue (played by Autumn Ness) mentions that she comes from generations of police officers, and she worries about her brother.
Josh and Malcolm’s parents, Calvin, a school principal (played by Kevin D. West) and Bella (played by Rajane Katurah) have different worries, concerned that by simply walking down the street, their sons could be profiled and killed by the authorities.
“It’s a different system,” says Calvin Perkins. “Black people get arrested at nine times the rate of white people.” He’s angry, he says, because 30 years later, he has to have the same talk with his sons that his father had with him. “Black men aren’t valued for being strong and smart. We get killed for so much less.”
But Sue Hartley insists that most police are not like the one who shot the Black man (we hear no details about the shooting). Most cops, she insists, chose their profession because they want to help people. Uncle Manny seems to embody that idea. He’s sent to restore order at the protest, which has turned violent.
There, he finds Malcolm, who behind his parents’ backs, drove his father’s car to join the demonstration. To keep Malcolm from getting arrested (and maybe hurt) he brings him back home to his parents. And then, Manny sits down to talk with Malcolm’s mother over a cup of coffee. They try to understand each other’s views but it’s difficult for both.
“We risk our lives every single day,” he tells her. “I brought Malcolm home so he could be safe.”
The play’s action moves from house to house and then to the younger children’s classroom and playground. The class is made up of children of various ethnic groups, but the bullying does not seem to be connected to those differences.
Playwright Cheryl L. West adapted the script from a book of the same name, written to help younger children understand racial justice. The theater is only a couple of miles from where a white Minneapolis cop knelt on the neck of George Floyd, killing him.
“Something Happened in Our Town” was in early rehearsals when yet another Black man, 22-year-old Amir Locke, was shot and killed by a member of the Minneapolis police department delivering a no-knock warrant. For cast members, the event hit very close to home.
The theater brought in a mental health clinician to help the cast and crew cope. Even the play’s director, Timothy Douglas, said he was feeling traumatized and turned the rehearsal area into a space to let the cast and crew talk out their emotions.
It seems to have worked. If you are wondering how to talk to your children about race and racial bias let the cast of “Something Happened in Our Town” help you. A post-play discussion session had young audience members asking questions. “Do Black people still sometimes get shot?” one asked. “Yes,” he was told. “In our city, where we all live.”
This is a hard discussion for any parent to have with their children, but this play might be a way to start the discussion. It’s recommended for kids aged 7 and older.
The play runs through March 27 at the Children’s Theatre, 2400 Third Ave. S., Minneapolis. Wear a mask and bring your vaccine card. https://childrenstheatre.org/whats-on/something-happened-in-our-town/