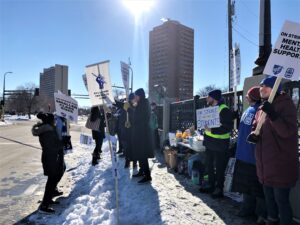 My daughter is home from school, as many children in Minneapolis are, because of the teachers strike. Every indication is that the district didn’t take the negotiations seriously. Neither my school board member nor Superintendent Ed Graff responded when I reached out to them as a concerned parent. The district did, however, take the time to email teachers asking them to break the picket lines, making it seem that they had no expectations of reaching a deal. Teacher Andrew Tralle has gone viral locally by making the letter he received into a song and posting it on Facebook.
Anyone who has an elementary school-age child, or knows someone who does, knows that the past few years have meant very specific challenges for those with young children. Parents as a group are burned out and at their wits’ end. While the district pays lip service to teachers and Educational Support Professionals (ESPs) they seem to think that if the teachers strike, already overburdened parents will turn against the teachers and push the union to give up on their hard-line demands, such as a living wage for ESPs and concrete policies in writing to protect teachers and ESPs of color from layoffs.
The district has said that they agree with the teachers on these issues, but there just isn’t enough money to go around. For example, the union wants to increase starting pay for 90% of ESPs to $35,000 a year. This doesn’t seem like an exorbitant amount of money to me, but apparently the difference between that number and the current starting pay for ESPs is enough to break the Minneapolis Public Schools (MPS) budget. Meanwhile, Superintendent Graff drew a starting salary of $225,000 in 2016, which was about 18% higher than the former superintendent Bernadeia Johnson’s salary. While one could argue that we need to pay top dollar for top talent, having the first strike in 50 years under your watch doesn’t exactly seem like top talent to me. 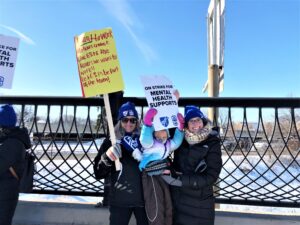 According to openthebooks.com, MPS principals make anywhere from $119,000 to $150,000. The same website lists MPS as having 138 employees making over $100,000. The district can find the money to pay these salaries, but when it comes to the people who interact with our children on a daily basis somehow there’s no money left. And let’s not forget the fact that the school board voted to redistrict last year knowing it was estimated to cost $11.5 million in the first year alone. Compare these numbers to the realities facing ESPs. As one ESP told me, “an ESP shouldn’t have to work more than one job.”
By not even trying to find the money, the district is trying to pit parents against teachers. But there’s a problem with this tactic. Yes, in many ways parents depend on schools as a form of daycare, but that’s not why we send our children to school. We send our children to school largely so that they can get an education. We also send our children to school so that they can learn socialization and how to function in the world. For parents, the people who are teaching our children and how they are treated are vitally important because those things will directly impact how well our children learn in school. If our teachers and ESPs are underpaid and struggling to make ends meet, how do we expect them to function in the classroom?
If we have learned anything in the past two years it’s this: we need each other, we’re stronger together, and everything we’re told is impossible is somehow suddenly possible when it benefits those at the top. Working from home was IMPOSSIBLE for the vast majority of office workers until it was implemented in under two weeks. The money is there to fix this – we just need the right priorities.

Publisher’s Note: We have, for years, asked to see a line-item budget for the Minneapolis Public Schools.  We know from other documents that the budget contains almost 20% bureaucratic bloat.  Acceptable bloat is 15%.  Area superintendents have to go.  Assistants to assistants have to go.
Get rid of the bureaucrats and pay the teachers more.