Township 28N, Range 24W, Hennepin County, Minnesota. Note the wetlands on both sides of the Creek and at the west side of Rice Lake. The blank southeast corner is part of the Fort Snelling Military Reservation. The curlicue representation of the Creek is typical of older maps. 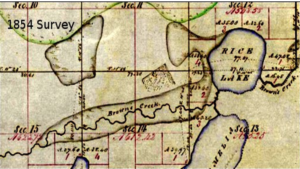 The shaded areas represent wetlands which extended, almost uninterrupted, from Lake Harriet east to 28th Avenue. Not shown: the wetlands follow the creek throughout Minnehaha Falls Park and along the Mississippi River. The southern border of Minneapolis was primarily along 24th Street in 1874.

This 1892 map illustrates that urbanization was rapidly overtaking the Rice Lake/Lake Amelia (Hiawatha-Nokomis) area. Speculators and developers had largely replaced the small farmers and other small businesses on the former 40-80 acre parcels. By this time, the southern boundary of the City of Minneapolis was 54th Street.

Northeast of Rice Lake, Lot 2 – shown here subdivided into large lots for residential development – was once part of the dairy farm operated by Esther Osmer. Residences (cottages?) with outbuildings had concentrated on the east side of Rice Lake south to Minnehaha Parkway. The platted blocks were almost entirely vacant lots.

The dotted lines in Lake Nokomis (partially shown) and Rice Lake along with the Creek east of Cedar Avenue were formerly the boundaries of the Fort Snelling Military Reservation.

This 1894 topographical map by the U.S. Geographical Survey does not show wetlands at Rice Lake or adjacent areas of Minnehaha Creek. However, areas in Lake Hiawatha Park and along Minnehaha Parkway between Hiawatha and the Falls were referred to by the Park Board as swamp lands until at least 1933.

Wetlands remained at the southwest corner of Lake Nokomis and around most of Mother Lake.